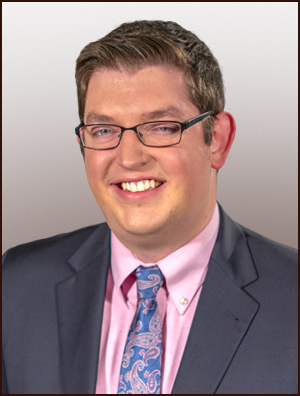 Dave Caulfield joined the ABC 57 First Warning Neighborhood Weather Team in January of 2020. This is his fourth stop in his meteorology career. He worked at KAUZ in Wichita Falls, Texas, WBRE/WYOU in Wilkes-Barre, Pennsylvania, and WISC in Madison, Wisconsin before joining WBND.

Dave grew up in Hackensack, New Jersey, where his love for weather grew with each passing blizzard and nor’easter that passed through. He remembers watching the streetlight out of his bedroom window for the first snowflakes to fall, hoping for a snow day. Dave completed the Boy Scout Weather Merit Badge while he was in 8th grade, the same year that Hurricane Katrina devastated much of the Gulf Coast. Seeing the impact of the storm, both during the event and well after the last raindrops had fallen, had a profound effect on Dave. These events, plus his love of math and science, led him to study meteorology in college.

Dave attended Valparaiso University just up the road where he graduated with a degree in Meteorology in 2014. While in college, he was able to go on two storm chases across the Central Plains. He got to see all sorts of severe weather, including numerous tornadoes, form right in front of his eyes. This experience allowed him to connect what he learned in the classroom with weather in a real world sense. He also was a producer, anchor and meteorologist for Valpo’s student newscast, “The Shield.”

Apart from weather, Dave loves to spend time with his wife (who is originally from Marshall County!) and his son, Rory. He has a cat, Hans, who is a loveable rascal and loves to scratch literally everything he can get his claws on. Dave loves to play (and host) trivia, and loves to learn useless bits of random information about every subject. You can usually find him re-watching The Office or consuming every bit of comedy he can get his eyes on.

Dave loves making new connections and engaging with the community. You can connect with him by following him on Facebook or Twitter. He can also be reached by email at dcaulfield@abc57.com.