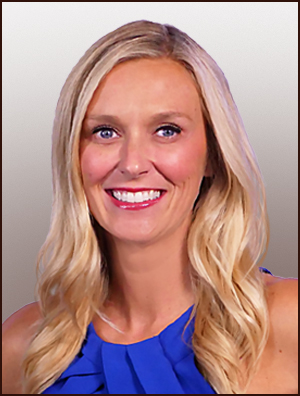 Allison Hayes joined the ABC57 team in August of 2016 to head up our coverage of Notre Dame football, as host of Saturday Kickoff.  Allison is an award winning sports broadcaster from right here in Michiana.  Allison has been working as a reporter for the Big Ten Network since 2013 and previously worked for 8 years as the sports anchor at WSJV-FOX 28 in South Bend, as well as the Sunshine Network in Florida and WCJB.  She is also the sideline reporter for the Indiana Champions Network, covering the Indiana High School state championships for the IHSAA.

Allison was born and raised in Niles, Michigan and is a graduate of Niles High School.  She went on to study Telecommunications at the University of Florida and earned her Masters degree in Commercial Recreation and Sports Tourism.

Allison has covered many major sporting events throughout her career, at the professional, collegiate and high school level.  But her favorite events include Notre Dame’s undefeated season enroute to the National Championship game, as well as multiple bowl games, and the men’s and women’s NCAA basketball tournament, Final Four and National Championships.

“I honestly believe I have my dream job!” Allison says of her career.

When she isn’t on the sideline, you can catch her on the golf course or the water.  And, she is the founder of the non-profit organization One Good Deed Michiana.  Her charity recognizes people in our community who go out of their way to help others in need and has a scholarship in her late husband’s memory, the Robert Freeze Memorial Scholarship.  To learn more about Allison’s organization go to onegooddeedmichiana.org.

But above all, Allison’s greatest joy is raising her beautiful daughter, Emery.