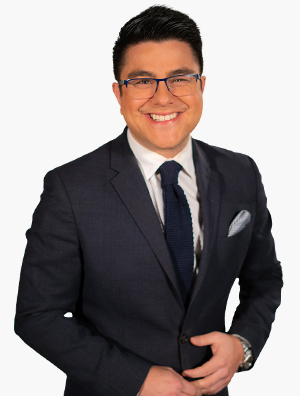 Vahid Sadrzadeh is an Emmy Award Winning Anchor and Reporter that joined the ABC 57 News team in January 2016.

Currently, Vahid is a weekday morning news anchor on ABC 57 from 4:30 am to 9 a.m. and is a reporter for both ABC 57 Saturday Kickoff and 57 TipOff, covering Notre Dame football and basketball.

Vahid was born and raised in Madison, Wisconsin and received a Bachelor's degree in Broadcast Journalism and Communications from St. Olaf College in Northfield, Minnesota.

During his time with ABC 57, Vahid has covered the College Football Playoff, the NCAA Tournament, the Midwest League All-Star Game and Senior PGA and Symetra Tour golf tournaments.

Prior to making the switch to television at ABC affiliate KSFY-TV in Sioux Falls in 2015, Vahid was in radio at 920AM KDHL in southern Minnesota doing sports play-by-play and on-air for KQRS/LOVE105 in Minneapolis.

Vahid and his fiancee are avid animal lovers, enjoy a good bowl of Ramen and love to seek out new adventures around the globe!