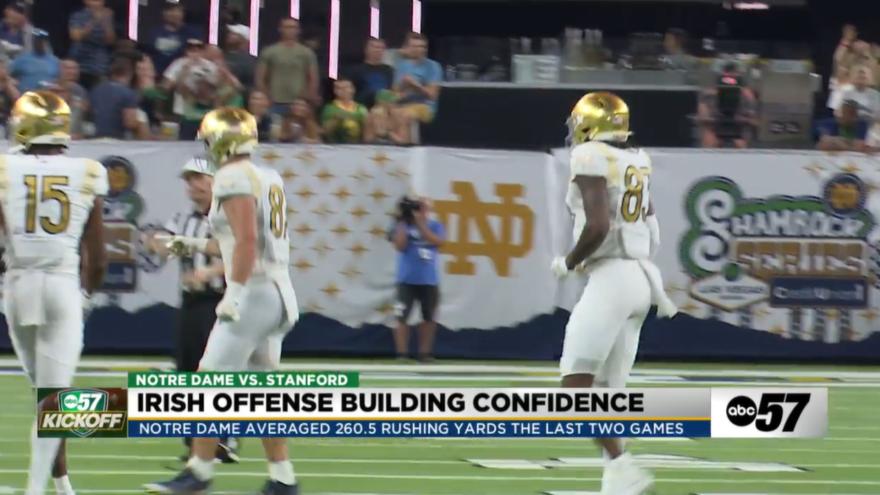 We’ve heard it time and time again: the success of the Irish starts at the line of scrimmage.

Just five games into the season, Notre Dame has gone from bad to great, thanks in part to the offensive line being physical.

When it did click for the Irish, the run game went from 206 yards in two games to 668 yards in three games.

Audric Estime has 297 yards and three touchdowns, Chris Tyree has 186 yards and one touchdown, and Logan Diggs has 143 yards.

"We have talented players. Our running backs certainly fall under that umbrella," said Offensive Coordinator Tommy Rees. "There's three of them playing at a high level right now."

The wide receivers have also been stepping up to the plate. Guys like Lorenzo Styles, who grabbed his first touchdown of the season against North Carolina, and most recently, the emergence of #83, freshman Jayden Thomas.

Thomas has only six receptions so far this season but after his spectacular touchdown catch against BYU, he'll likely become a popular target over the next seven games.

"We preach in our room that was our logo on it. So it's our ball, we should come down with it," said Thomas.

Thomas credits his teammates for his success. That includes arguably the best tight end in the country Michael Mayer, who continued to rack up the touchdowns against BYU.

Mayer also made history, breaking two records: one for the most catches in a single season by a tight end and most career receptions by an Irish tight end.

"I wasn't aware," Mayer said. "You went back, sat on the bench and saw me up on the screen. And then I heard they kind of announced it."