Made in Michiana: South Bend Woodworks 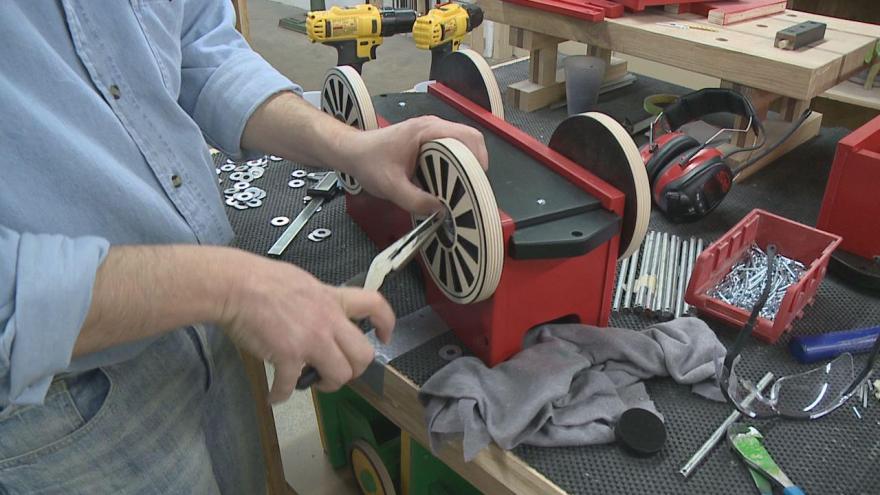 SOUTH BEND, Ind. - South Bend Woodworks is producing about 50 items a week from its South Scott Street location, which makes it ABC 57's first stop for Made in Michiana.

This business was born and is thriving in South Bend.

Company President Mike Lindburg is a graduate of the University of Notre Dame. He and his wife decided they wanted to return to the area to retire, but it wasn't quite time to stop working, just yet.

Lindburg came up with the idea for the shop a couple of years ago after buying a wooden toy for his granddaughter.

“I looked at it and thought why cant we make this here in South Bend?" said Lindburg.

He made his two-year-old granddaughter a wooden duck stool, at the time, and now they've perfected it. The duck image is even a staple in the company logo.

“I assumed and thought people like me would want something that they could give their children or grandchildren that would last, and ours lasts forever," said Lindburg.

He eventually set out to find a local experienced wood worker and met Don Troxel.

The two started brainstorming about their new products and the first toys they made, were based off of ones Troxel made for his kids when they were young.

“I made the train for my children, my oldest son actually. When he was just a little guy," said Troxel.

That son, is now a member of the South Bend Woodworks Team. He runs the CNC Router, which is a computerized wood cutter they use.

Every item produced from rocking chairs to trains, takes about four to five minimum hours of work according to Lindburg.

The company is striving to make products that will last for generations.

All the pieces are produced in South Bend where they are cut, sanded, painted, assembled, and shipped from.

Once they arrive in the hands of kids, the young ones seem to approve.

“When we were downtown at Kid's Night Out they were doing things with them that I wouldn't have thought about," said Troxel.

He added, these aren't your typical toys you can buy at big chain stores, they allow kids to use their imagination.

"That to me is real important to let a child use their imagination to figure out how to play with something," added Troxel.

South Bend Woodworks sells select items at the Notre Dame Bookstore and you can find all of its products on its website, click here.