Made in Michiana: Ben's Soft Pretzels 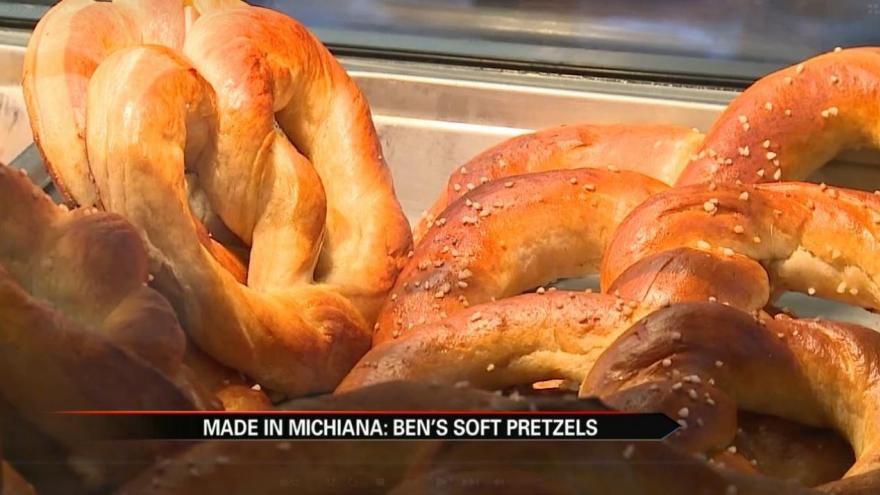 The first stop on our Made in Michiana week is Ben's Soft Pretzels. The company has roots all in South Bend, Shipshewana, Goshen and Elkhart.

"It's a half a pound of baked goodness. Very fluffy. It's a yeast risen product. It's more bread-like."

The first store opened in the Concord Mall in 2008 and in less than a decade spread to more than 80 locations in 7 states, but its roots go back even further to a chance meeting in 2002..

"My partner Scott was out doing some ministry work in Shipshewana and he got lost and the guy he was with said hey I think I know whose house this and if we go there we are going to find and Amish guy and his wife and they will have cookies," said Krider. "So surely my business partner Scott said let's go get some cookies. So they went and it was Ben's house."

Fast forward a couple years to the South Bend Farmers Market and what would become the beginning of Ben's Soft Pretzels.

Unfortunately, that sale did not include the pretzel recipe.

"Ben and his wife who are Amish, have never been to a mall, never had a soft pretzel got some old Dutch recipes from their family perfected it. It's the recipe we have today that we serve in all of our locations," said Krider.

"It took them about four to five weeks to perfect it and they burnt a lot of pretzels," said Krider. "They tried a lot of different things."

One of those things is imported pretzel salt from the very birthplace of the pretzel -- Germany.

"No one else uses imported German pretzel salt," said Krider. "It just happened that they had this bag of pretzel salt and they tried it and it worked great and it's a phenomenal salt."

It's one of the things that has kept fans hungry for more.

"We're at University of Notre Dame, University of Wisconsin, Auburn and people will wait in line for 45 minutes in the fourth quarter to get a Ben's Soft Pretzels," said Krider. "People love the product."

Even with that popularity,  they're still keeping their outlook small -- for now.

"Our M.O. right now is for east of the Mississippi -- Florida, Georgia, Midwest," said Krider. "We still have a lot of growth here in Indiana that we can be a part of."

Home base remains in Indiana. Their live large factory sits in Elkhart. It's where Ben still mixes the recipe himself  with the help of a handful of employees. The recipe so secret our cameras were not allowed inside. A move to protect their product that even the owners themselves never get sick of.

"I still get goosebumps," said Krider. "I have been eating Ben's Soft Pretzels since 2008 when we founded the company and i have yet to find a time when I said - yeah I don't want a pretzel."

A feeling he hopes fans will share for many years to come.