Made in Michiana: 18 Vodka 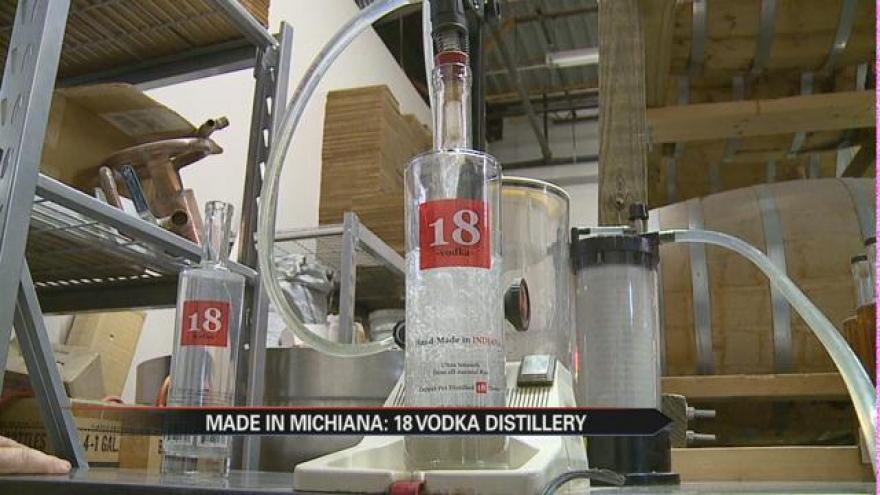 MISHAWAKA, Ind. - This week ABC 57 is taking you to a distillery that is pushing the limits on how it makes its liquor, where tradition meets technology.

It was kind of spontaneous the way Steve Ross got into the distillery business.

“I wanted to make meade and I made this alcohol and I said gee, this is easy,” 18 Vodka owner and founder Steve Ross said.

So, Ross ordered a still.

“We ordered it, it took about six months, because it's all handmade and it's made specifically for us,” Ross said.

Ross calls it a state of the art piece of equipment, hand-crafted and shipped out of Germany, and he says the process of building 18 Vodka from scratch was not easy.

“What's interesting is I got four of my friends who live locally and we put the thing together on a weekend in here. None of us, well I had seen the stills, they had never seen a still,” Ross said.

His methods worked. Ross boasts one of the smoothest vodkas on the market.

“The still is made from copper and it's essential that you have copper if you are going to make a good spirit,” Ross said.

It's not just 18 Vodka's equipment that gives its liquor such a high-quality taste, it's also Ross's process.

“We are the only distillery in Indiana that goes strictly from grain all the way to glass. We don't use anybody's pre-mixed items,” Ross said.

Not only is Ross's 18 Vodka unique, his business is also growing. After seven and a half years, Ross now distributes his liquors in Indiana and along the East Coast and he says he hand-bottles and ships out about 1500 bottles a year.

“We distill in Indiana and we do a little bit in D.C. because their laws are very permissive. Right now, we're trying to put a deal together to do New York and New Jersey and we're hoping to get into Chicago,” Ross said.

Ross not only specializes in vodka, he also distills whiskey, rum, gin and liqueurs. Anyone is welcome to stop by for a taste and a tour of the Mishawaka facility, and you will even get a lesson in the history of distilling.

“A lot of these distributors can trace their roots back to bootleggers,” Ross said.

Although vodka has been sipped on for centuries, Ross says his liquor boasts a new class of spirit, and it's all in the name.

“We have to use this column and if you'll count, there are 18 chambers, so those 18 chambers give us the level of purity that we are proud of, so that's how we got the name 18,” Ross said.

Not only made, but also sold, sipped and savored in local stores all across Michiana.

ABC 57's Made in Michiana will be back in July. If you have any local companies you think we should tour, email us at News57@abc57.com.