Josh Anderson gets attention on the water, and on the field 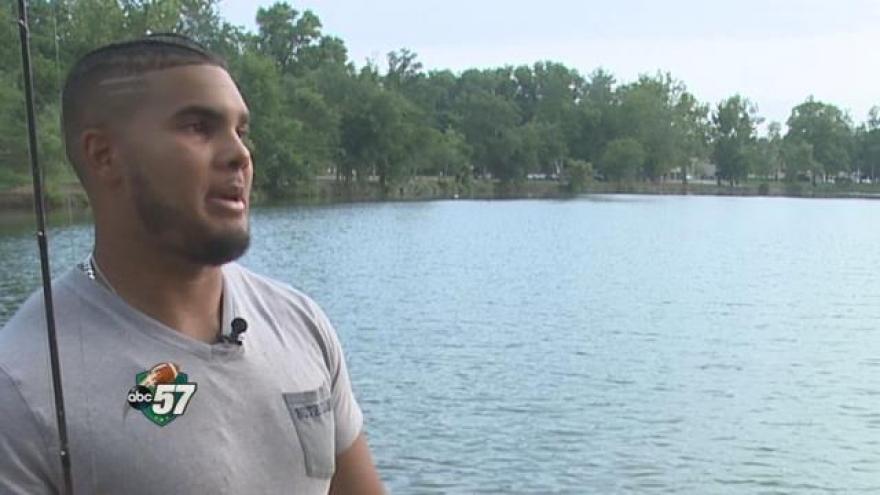 Bleacher Report captured the moment as the team mobbed Finke.

Last season, it was running back Josh Anderson who stole the internet when he came out to model the team's Shamrock Series uniform.

Now Anderson is receiving attention for his actions on the water, instead of the football field.

"To be honest, fishing is a big priority in my life. I feel like it's my stress reliever so if I didn't do it, I feel like there would be something lacking. And I honestly get out on the water as much as I can. Even if I have a few minutes of free time before or after class I'll just come out here and take a few casts, even if it's one cast, five casts, I'll just get out here because it makes me feel that much better," Anderson said.

Anderson finds solace along the shoreline.

His love for fishing began when he was just a little boy.

"My grandfather loved to fish, my uncle loved to fish. I have this big picture in my house of me when I was maybe a year old fishing and I think that's where it started. I just fell in love with it and my love grew more than my father's and my uncle's and I kept doing it and I still love it today," Anderson said: "I have many memories of fishing with my dad when I was younger. We'd go to the lake all day and I insisted that we stayed all day and catch nothing, but it's funny because I'll take my dad fishing now and we'll catch 20 fish and he's like so amazed."

But casting a line is not just a hobby. Anderson has turned his love of fishing into a legitimate sport at Notre Dame.

"To be honest with you, it's a dream come true. We decided this past year to start a competitive fishing team here at Notre Dame and it really took a lot of effort on our part. We had to make a lot of calls, we are all athletes here at Notre Dame so we had to make sure everything abided by NCAA rules. And we were lucky enough to make it happen," Anderson said.

"I remember being a freshman coming out to this lake right here and taking a few casts and wishing, seeing these guys fishing on TV in these collegiate tournaments, I'm like 'Wow, maybe one day I can do this.' Just lucky enough my senior year we were able to make it happen and do better than any of our expectations and really just start something that can continue. Hopefully, can continue into the future and it's a big deal to me, to be honest. It's something that I'm really, really proud of," said Anderson.

Together, Brauer and Anderson competed in the 2016 Fishing League Worldwide Regional Bass Tournament and did extremely well.

The Irish duo missed making it to the national championship by less than one pound.

"I think it was by 10 ounces. If we caught, Bo had a fish on that was around 3 1/2-to-4 pounds, if we would have caught that fish we would have got, probably top 5 in the tournament, which was heartbreaking but we did the best we could and I think we did amazingly for our first FLW Collegiate Tournament and I'm really, really proud. It's like a dream come true and doing something that you love so much, competitively, like I play football here at Notre Dame, it's a dream come true. It feels amazing," said Anderson.

Anderson is a graduate student now, so he has one more chance to reel in a national title.

While Coach Kelly and his teammates have been very supportive of his big fish dreams, they also give him a hard time every chance they get.

"Matter of fact, I hope you got some clips from when he was at Culver because he came up zero with that fishing club. Well the club has done well but he came up zero fish and that's, he's going to have to live that down with his club members," said Coach Kelly.

Anderson doesn't let anything rattle him on the water, he knows he can always catch one on the next cast.