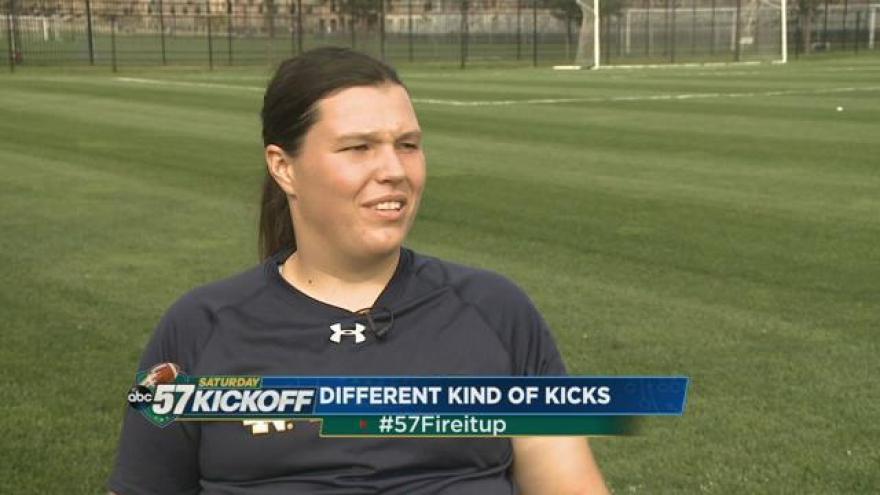 On the soccer field, Kiley Adams is a goalie, but she won't advertise it.

"The coaches and teammates know that my identity is not a soccer player, I don't list that in my top five attributes," Kiley said.

She should because she's pretty good at it. Entering Notre Dame, Kiley played on the club team for a year and a half before she was asked to walk onto the varsity team her sophomore year and the new environment provided many new challenges.

"They would like pause a clip and say what do we see here and everyone's like, 'well obviously the ball should've switched, the ball should've dropped ten yards, she needs to be two yards forward and tucked.' I don't even know what tucked in means," Kiley said.

Despite the language barrier, Kiley says she feels comfortable now, keeping focused and mentally tough, something she learned for the past 17 years from one of her other passions.

So Kiley and her parents searched for a sport.

"They settled on Taekwondo and 17 years later, I haven't taken a break," Kiley said.

A fourth degree black belt, Kiley trains year round. Add soccer, school, and multiple research projects and she'll tell you she's pretty busy; but that's the way she wants it.

"If I had too much free time, I just wouldn't know what to do with it," Kiley said.

But keeping her hidden talent didn't remain a secret long with her soccer team.

"There was like whispers, ask her about Taekwondo, or don't approach her from behind, she'll drop you," Kiley said.

And that passion transferred to the field, not many players want to mess with Kiley.

"I'll yell keeper and give them a look, like I will go for your legs if I have to. I think they go in a little more cautiously or someone will yell, it's Kiley stop!"

Her teammates took an immediate shine to the sport.

"They're always asking me, 'Do you have a fight coming up?' Can we come watch you fight? We'll drive to Chicago.' I'm like it's the night before a game. 'That's ok we won't tell coach,'" Kiley said.

Kiley's worlds collided two years ago, and that clash continues to grow stronger.

"I think it's good they get to bounce stuff off of me and it also helps I get a break from just talking to Taekwondo people about Taekwondo and just talking to my research team about my research, some girls look at things I've never considered before in such different ways."