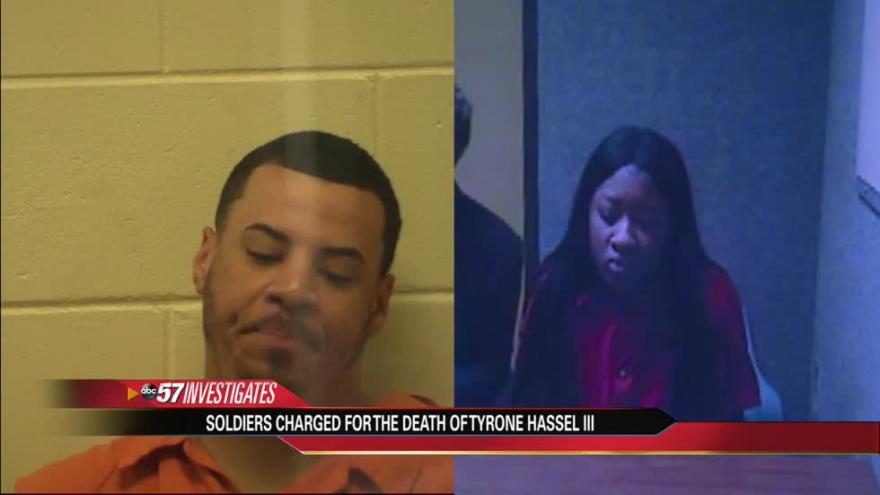 BERRIEN COUNTY, Mich. -- The wife of Tyrone Hassel III admitted to investigators she and her boyfriend planned to kill her husband while they were in Michigan on leave, according to court records.

Kemia Hassel and Jeremy Cuellar have been charged with murder in the fatal shooting of Tyrone Hassel III on New Year's Eve.

Around 11 p.m. on December 31, Tyrone was shot outside his parents' home on Colfax in St. Joseph Township. He had been shot in the head, neck and torso.

Tyrone was transported to the hospital where he was later pronounced deceased.

Through the investigation and tips, officers developed Kemia as a suspect in her husband's murder.

On January 11, 2019, Kemia spoke with investigators. She denied being involved in Tyrone's murder and took a polygraph.

Police said she failed the polygraph.

During questioning, Kemia admitted she and Cuellar made plans to kill Tyrone, reports said.

Kemia told police Cuellar came to Benton Harbor four times between December 19 and 31st and they had attempted to plan Tyrone's murder each time he was in town, reports said. Some of their discussions occurred over Snapchat, reports said.

On the night of December 31, Cuellar parked his vehicle at an abandoned house on Gerald Street and cased the area in preparation for the murder.

Kemia told police Tyrone went to Walmart and purchased ammunition for the New Year's celebration and thought Cuellar was going to kill him at that time.

Kemia told police she asked Cuellar why he didn't kill Tyrone then, Cuellar said someone was with him and he didn't want to do it at that time, reports said.

She told Cuellar it seemed like he didn't want to carry out the murder and demanded he kill Tyrone because she and Tyrone were leaving for Georgia on January 2 and she didn't want him to go with her, reports said.

Tyrone had made plans for his sister to live with them in Georgia and she didn't want that to happen. Tyrone's brother had lived with them in Colorado and that didn’t' go well, reports said, according to police reports.

Later that evening, Tyrone returned to his parent's house with food for Kemia and their baby.

Kemia allegedly contacted Cuellar that Tyrone was returning to the house. When Tyrone went outside to return to the party, he was shot and killed, reports said.

Army Criminal Investigators at Fort Stewart, Georgia, where Kemia, Tyrone and Cuellar were all stationed, spoke with several witnesses there.

The witnesses told the special agents they were aware Cuellar and Kemia had a romantic relationship while deployed to Camp Casey in South Korea, reports said.

One of the witnesses said Cuellar admitted to killing Tyrone. Cuellar allegedly said he shot Hassel in the head, then realized he was still breathing - so he shot him again, according to police reports.

Cuellar was located at his home in Hinesville Georgia and was taken into custody. He declined to speak with investigators about Hassel's murder, reports said.