Officer not charged in fatal shooting, charged for hiring prostitute while on duty

NOW: Officer not charged in fatal shooting, charged for hiring prostitute while on duty

Ripley County Prosecutor Ric Hertel announced the findings of his investigation into the fatal shooting of Eric Logan by a South Bend Police officer. [Click here to read the full report]

The prosecutor found Sergeant Ryan O'Neill's use of deadly force was justified and that prosecution of O'Neill for the shooting is not possible.

O'Neill resigned from the department not long after the shooting.

During the press conference, Hertel listed all of the evidence that was used to evaluate whether charges were warranted.

Hertel said there is no doubt O'Neill shot and killed Logan and showed a photo of the knife that was in Logan's hand at the time of the incident.

The 8 1/2 inch knife had been taken from one of the 7 vehicles that had been burglarized that evening, reports said.

The investigation revealed Logan had alcohol in his system and cocaine and THC in his urine, according to the autopsy.

When O'Neill arrived at the scene he parked behind a black Honda after seeing a man half inside the vehicle.

Logan had a purse under his arm and a knife in his right hand, reports said.

O'Neill said he told Logan to drop the knife, but he did not. He fired two shots and one struck Logan.

At some point Logan threw the knife at O'Neill, but it is not certain whether the knife was thrown before or after the shots were fired, reports said.

After the shooting, O'Neill turned on his body cam and reported shots fired. Several other officers arrived within one to two minutes.

Once the other officers arrived, a decision was made to load Logan into a patrol car and be driven to the hospital instead of waiting for an ambulance to arrive.

During the investigation, O'Neill was asked why he didn't turn on his body camera. He explained he thought it was a low priority call and believed it wasn't necessary. [excerpt from the special prosecutor's report]

When asked by the Indiana State Police detectives why his body-worn camera wasn't on at the time of the shooting, Sgt. O'Neill stated:

"At the time, you know, the policy was different. It's not like the general order that's out now. So, for low-level crimes- something like somebody going through vehicles ­it wasn't required ... So when I heard it dispatched, to me it's a low-priority call. It's just something that most of the time; we get there- the guy's already gone. You know- anyone who's going through cars. So, when I pull onto the street, uh, Colfax, uh, where all this took place, I called that I was on scene, but it, you know, I would have had to have turned it on on Colfax- a block away- and have it on filming my steering wheel as I was driving through the parking lot and, uh, because at the time I saw him, everything happened so quickly, I did not turn it on. Uh, but yeah, at the time, it wasn't required, and it just was a low-priority call... You know, uh, so I just sort of assumed that there probably wasn't going to be anyone there and didn't turn it on.,,

When asked why he eventually turned his body-worn camera on, Sgt. O'Neill stated:

" ... I start thinking "Holy [expletive deleted]!" This went from being a guy rummaging through cars to, I just fired my pistol for the first time in my whole career. Uh, so I turned the body cam on, cause I'm like, you know. And, if, if I could go back, but at the time, it just, for a low, low priority call like that, it didn't make sense to turn it on, and it wasn't required ... Uh, but my thinking then was, you know, like I said, "[Expletive deleted]! I need to turn this on." I, I don't, it was kind of like, I wish it would've been on. This should've been on, but, there's no way I could've known. No way I could've known it was going to turn into that. So, I just thought, I better get this on and record as much as I can."

When asked why he muted his body-worn camera, Sgt. O'Neill stated:

" ... it was kind of one of those things where the, the suspect was already gone. The event was over, and that's something that had been done, it was pretty common practice for us to mute the camera when it was over. So, you could look back at thousands of videos, and they're muted pretty frequently ... And, the idea is just that, you know, uh if you and I go to uh, any kind of scene and something happens, and then it's done, suspect's gone, there's nothing there that's going to be used in the prosecution or whatever, and we're going to stand there and [expletive deleted], uh we might mute it. Now, we'll leave the camera run. Sometimes, we turn it off. We might leave it run, so that if, you know something unanticipated happens, we can get the volume back right away, but there's a continuous video file of it. .. "

While O'Neill wasn't charged in the Logan case, he has been charged for allegedly paying a woman in connection with a sex act while on duty on May 19, 2019, according to the probable cause affidavit.

The woman spoke with investigators and said she was walking the street trying to make money when O'Neill pulled up in his police car and in uniform and asked her what she was doing, reports said.

She told him she was trying to make money and he responded what if he gave her money to do something, reports said.

The woman got into the police car in the area of Calvert and Michigan streets and they drove to an ATM, reports said.

O'Neill took $20 out of the ATM, then drove to a secluded area, reports said.

They got out of the patrol vehicle and performed a sex act on himself.

After the sex act was complete, O'Neill took the woman home, reports said.

Records from the GPS system of the patrol vehicle confirmed the vehicle was in the locations cited by the woman in her testimony, reports said.

O'Neill was taken into custody on March 6 on charges of official misconduct, ghost employment and public indecency. 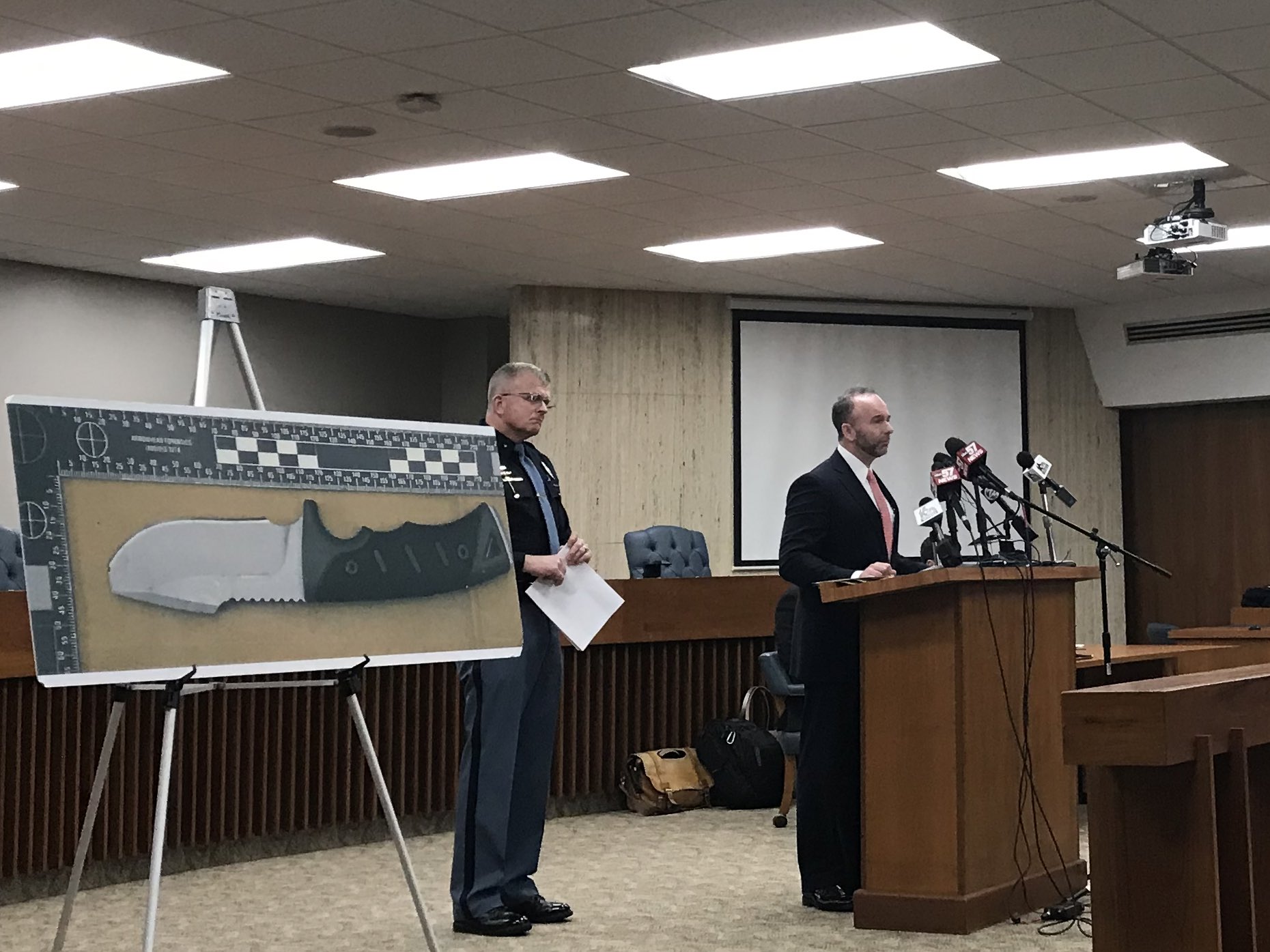