Fast Track: The future of the South Shore Line

Fast Track: The future of the South Shore Line

90 minutes is the magic number.

“We have the opportunity to unlock this region. to tap the third largest market in the country,” said president of the Northern Indiana Commuter Transportation District (NICTD) Mike Noland.

“Getting to that 90 minute mark is significant”

Getting the travel time of the South Shore Line down to that 90 minute mark is when Noland says you could see people who work in Chicago, choosing to live in South Bend.

“They go into Chicago and get that money, then they come back to Indiana and spend it,” Noland said.

The South Shore Line is stationed on the East side of the South Bend International Airport. It's a two and a half-hour trip ending at Millennium Station in downtown Chicago. The ongoing double track widening project in Michigan City, is expected to shave 33 minutes from the commute.

Now the debate is how to shave off the remaining half hour.

He, along with other county leaders, wants to see the train station moved to the West side of the airport. Currently, the first 10 minutes of every ride is spent turning the train around to head in the right direction. Moving to the other side of SBN could save time, but it could cost upwards of $50 million. And it needs FAA approval.

To make that price tag more reasonable, St. Joseph County is spending $119,000 on a still-unreleased study looking at the economic impact of adding freight service to the South Shore Line.

“Hopefully, now that we’re an international airport, we could bring that freight in,” Kostielney said. “Instead of [freight] stopping into Chicago, they could fly directly to South Bend, unload, then we could take that where it needs to go.”

Up to this point, the City of South Bend is hesitant to agree to any financial support for a move at the airport.

“Train stations are meant to go from downtown to downtown. That’s how they've been built throughout the history of rail,” South Bend mayor James Mueller said.

The long term vision of the city is to see the South Shore Line in downtown South Bend.

“Over the years, buildings in the downtown had been torn down as people moved away,” Mueller said. “The possibilities for moving back and getting buildings in those areas is tremendous.”

A 2020 study laid out a path for a downtown station on the South side of Four Winds Field, right in front of Union Station Technology Center. 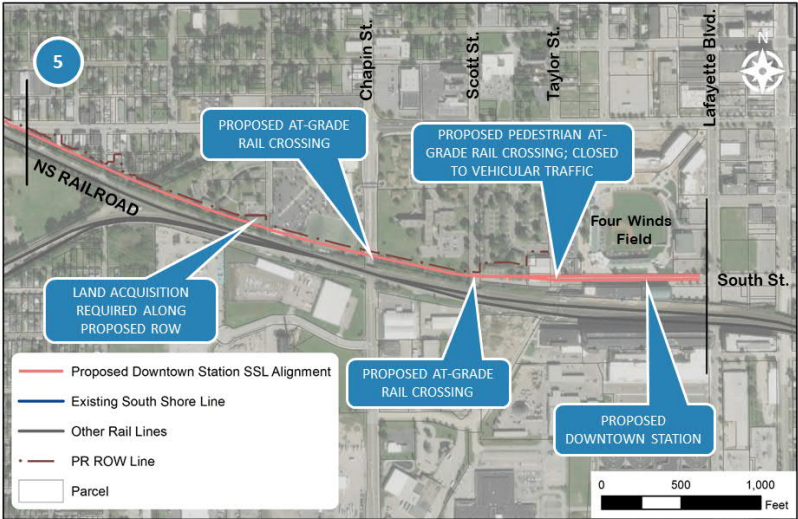 There would need to be an extensive environmental study, properties demolished, and would take more than a decade to complete. The price tag, in 2019, was estimated at $112 million dollars. It would likely cost more by the time a decision is made. But the same study estimates an economic impact of $430 million, creating 7,770 jobs over a 10-year period.

“People now understand the value proposition that Indiana is,” Noland said. “The cost of living is less, you get more for your money, our real estate tax is way lower.”

“I think going to the airport does not dismiss going downtown, but [the airport project] hits that immediate need,” Kostielney said. “Then as ridership increases, we look at going downtown. Because there are lots of advantages to going downtown as well.”

But two things still need to happen before a decision is made. One, the economic study on running freight from the airport location. Then, the FAA still needs to decide whether it would allow the South Shore Line to move the train stop to the other side of the airport.

Those are the final two pieces of information needed before leaders can decide to put any project on the fast track.

“Every day you go by it gets more expensive and it gets more difficult,” Noland said. “We’ve talked about it for decades. We've missed opportunities for decades. But we’re going to seize them now, that’s what’s exciting.”

Then this then all comes down to funding. Not only has the city said it likely won't put money towards moving the South Shore Line to the other side of the airport just to shorten the commute, but if the study on the freight component does not show some large economic upside, county reps said they probably won't be interested, either.

While all sides are optimistic about possibilities of tapping into new federal funds from the Bipartisan Infrastructure Package, any project would need the support of local dollars.