4-year-old forced to stay in basement alone, naked, before his death 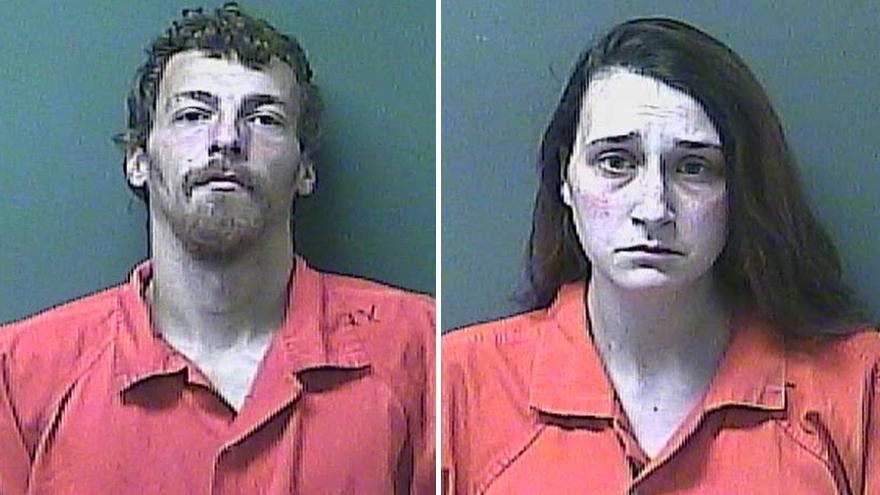 LA PORTE COUNTY, Ind. -- A 4-year-old boy who was murdered by his father was forced to stay in the dark basement, by himself, naked because he wasn't potty trained, court records say. The boy died Sunday as a result of blunt force trauma. His father has been charged in his death. His mother is also facing charges.

The La Porte County Sheriff's Office was called to a home in the 3100 block of E. 875 in Hamlet around 2:45 a.m. on Monday for reports of a child who was unconscious and not breathing.

Two additional 9-1-1 calls regarding the incident were received before the first deputies arrived.

One call was to inform deputies the child had been battered by his father, Alan Morgan. The other call was by the child's mother saying Alan might flee because he had lost his temper, hurt the child and was scared, according to the probable cause affidavit.

Two deputies arrived just before 3 a.m. and attempted to get someone in the home to answer the door.

Because they were aware there were other children in the home, they entered through the unlocked front door.

Deputies located the victim, 4-year-old Judah Morgan, in one of the bedrooms. He was under a blanket, naked and covered in bruises, according to the probable cause affidavit.

Judah had no pulse and was cold to the touch.

There were three other children in the home, but no adults, deputies said.

Deputies escorted the other children to a waiting ambulance.

A search warrant was requested and was obtained around 5 a.m. A search of the home began around 5:30 a.m.

Deputies said the exterior of the home was littered with trash.

Inside, the home smelled of urine and rotting food. Deputies saw a home in disarray with clothing, garbage, rotting food and feces throughout, reports said.

The refrigerator had a cord and lock attached to it.

A dog was located inside a cage with hair and feces on the bottom of the cage. The dog was malnourished, according to the probable cause affidavit.

In the basement, deputies found duct tape throughout.

Records say there was one area where duct tape formed a circle a few inches in diameter. In another area, there was a small piece of duct tape stuck to a small black sock. There was another one approximately a foot off the floor stuck to a wall stud, reports said.

A 'Be on the lookout' was issued for Alan Morgan. He was located in Knox around 7:15 a.m.

The victim's mother, Mary Yoder, spoke with deputies about how Judah was treated.

Yoder said Judah was sent to the basement naked as punishment for not being potty trained like the other children. While in the basement he was bound with duct tape and was physically abused.

She said Judah didn't have a bed in the basement, but was given a blanket, reports said.

The lights were purposely left off as punishment/scare tactic and food was withheld from him, according to the probable cause affidavit.

Yoder said she also sent Judah to the basement but denied binding him or beating him, reports said.

She said Judah was kept in the basement for several days at a time before being allowed back upstairs with the rest of the family.

Judah was in the basement the last time she saw him on Saturday, before she went to the hospital to give birth, reports said.

Yoder said she was aware of what Alan was doing to Judah, but she was afraid of him. She said she tried to stop him by saying things like, "that's enough" and "leave him alone," according to the probable cause affidavit.

Judah's oldest sibling, who is 7-years-old, spoke with investigators.

He said he witnessed his mother and father take Judah to the basement forcefully together and individually. He heard arguing and yelling when Judah was in the basement with his parents, reports said.

When his father bound Judah with duct tape, his ankles were bound and his hands were bound behind his back, according to the probable cause affidavit.

On Sunday, the day before Judah died, the family had a birthday party for a third sibling along with cake. The 7-year-old said during the party, Judah was in the basement, where he normally is, according to the probable cause affidavit.

Deputies also spoke with Alan Morgan's brother. He said Yoder started sending him messages on Facebook at 2:23 a.m. Monday about Alan needing help because of a serious emergency, reports said.

The messages were before 9-1-1 was called.

A message Yoder sent to the brother said, "I mean I kind of hate him right now I mean I have every right to I guess but I still don't want him to kill himself you know I don't need two people gone in one day."

Alan's brother said he took the cake and presents to the home for the birthday party on Sunday. While at the home, Alan said Judah was at one of Yoder's friends' houses, according to the probable cause affidavit.

An autopsy was conducted on Judah on Tuesday. His cause of death was blunt force head trauma and the manner of death was homicide.