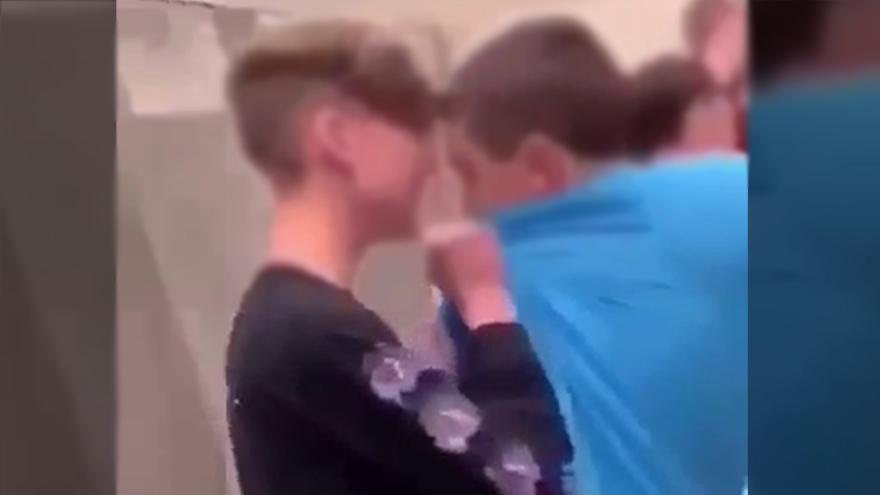 St. Joseph County Police were called to the middle school Monday afternoon because of a fight.

Reports say a teacher heard loud noises coming from one of the restrooms around 2 p.m. Monday and went inside to see what was going on, according to police.

When the teacher entered the restroom, the fight broke up, reports said.

The students involved were taken to the office.

The principal told police one of the students spit on the other right before spring break, which may have prompted the fight, reports said.

The principal of Discovery Middle School sent a letter to parents about the incident.

FROM THE OFFICE OF MRS. HARPER

This letter is to inform you of a student altercation that took place late yesterday afternoon (Monday, April 8) in the boys restroom. The fight was captured on video. We are aware that the cell phone video of this altercation has been shared and many of our students and families have seen it. I wanted to take some time this morning to clear up some rumors and misunderstandings.

This incident happened during a passing period. This incident involved three general education students, despite what has been discussed and questioned on social media. Teachers on hall duty heard the disruption in the bathroom, and while it is not seen on the video, the teachers did intervene quickly. All the boys involved were stopped as they exited the bathroom and our investigation into the incident began immediately, including contacting the parents of those involved. Following the P-H-M Student Handbook disciplinary guidelines, we have responded with appropriate disciplinary action for all those involved and we reserve the right to issue more consequences as our investigation continues. Please respect and understand that under FERPA (the Family Educational Rights and Privacy Act) we can not disclose or discuss the details of these students’ disciplinary measures with those not involved in the incident.

I know many of our families and students have seen the video and have since learned that it has also been shared with local news media. It is disturbing in nature on many levels. This incident serves as a stark reminder to please reinforce with your your children the importance of reporting any and all unsafe behavior or situation immediately to an adult, especially when something is actively taking place. This is something we discuss frequently in school … see something, say something!

The safety of your child and all our students is a top priority for Penn-Harris-Madison School Corporation. We take these matters very seriously, responding immediately with the appropriate action. P-H-M also utilizes the Safe School Helpline® as a confidential way to report anything that threatens the safety of our schools. It is Available 24/7 via phone, text, online or download the new app:

On Thursday, the district informed parents that suspension is generally just the first step in the disciplinary process.

Penn Harris Madison said the victim of the fight was not one of the students suspended.