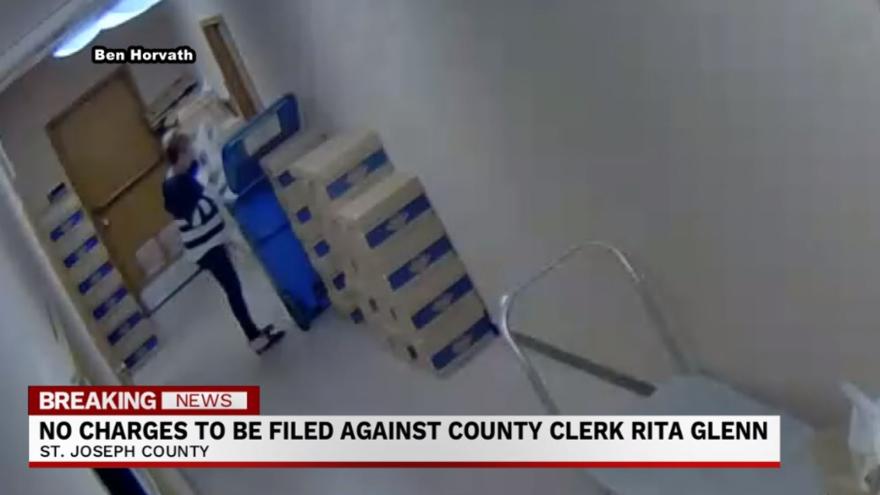 The decision comes after the conclusion of an ISP investigation.

County officials were outraged by security footage which appears to show Glenn breaching protocol -- entering and leaving the county's absentee ballot storage room before throwing away a number of papers before the May primary last year.

Normally two people are required to enter the storage room, one Democrat and one Republican.

The Indiana and St. Joseph County Republican parties have since filed a joint lawsuit against the county election board over the issue.

According to court documents, on May 2, Glenn contacted Republican board member Benjamin Horvath a number of times via text, email, and phone when Horvath did not show up to unlock the Republican lock.

She also contacted other members of the Republican Party to find out where Horvath was and to ask for their direction to enter the room, reports said.

Glenn then spoke to an employee of the Clerk's office, who identified herself as a Republican and offered to unlock the door with a spare key, according to reports.

Glenn did not take action to verify the employee's party status but the two of them went together to unlock the door, according to reports.

Emails given to ISP Senior Trooper Detective O'Keefe, who was assigned to the investigation, show Glenn's efforts to get in touch with Horvath.

When Glenn told Horvath that she, "had a republican clerk open it with me," Horvath responded, "Ok, I apologize! Sorry. I would have come before but didn't know," reports said.

Horvath said he originally did not understand the urgency for needing to enter the room on the morning of May 2 but that it became apparent when he began getting notifications about the door being locked, according to reports.

The first notification of it came at around 9 a.m., he said.

After presentation of the facts, court documents state the following:

"The special prosecutor has determined that under the circumstances known to the State based upon the official investigation conducted by the ISP investigator in this matter, the credible and admissible evidence does not support the filing of criminal charges."