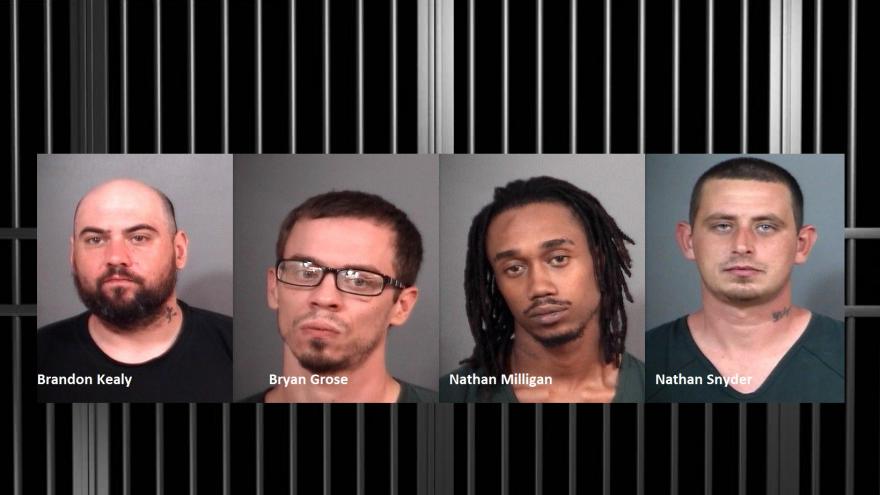 MISHAWAKA - Four men are facing charges in St. Joseph County after police say they forced a man into a trailer at gunpoint and injured him over a drug disagreement. Court documents say the victim was beaten up inside the trailer, which is located at Oak Grove Trailer Park in Mishawaka.

According to a probable cause affidavit, the four suspects let the victim go only when police arrived on September 17. The four named suspects include Bryan Grose, Nathan Milligan, Brandon Kealy and Nathan Snyder. Another suspect's identity isn't being released because he or she is a juvenile.

One of the suspects, Nathan Snyder, allegedly told investigators that the altercation started after the victim was accused of cutting down marijuana plants. The victim told police that the men took turns hitting him and that at least one of the men had a gun.

Snyder told officers that he owned the trailer in question and that he lived there with two roommates. When investigators searched the home, they found guns, a green leafy substance which tested positive for marijuana and a metal tin containing what officers believed to be cocaine. Investigators say they also found pills inside a backpack in the trailer. Outside the trailer, officers found a live marijuana plant that was approximately four-and-a-half feet tall, which they removed.

Kealy is facing seven charges, including battery resulting in bodily injury, conversion, criminal confinement, pointing a firearm, unlawful possession of a firearm by a serious violent felon, possession of altered handgun and possession of cocaine.

Milligan, Grose and Snyder are all facing three charges each. Those charges include battery resulting in bodily injury, conversion and criminal confinement.