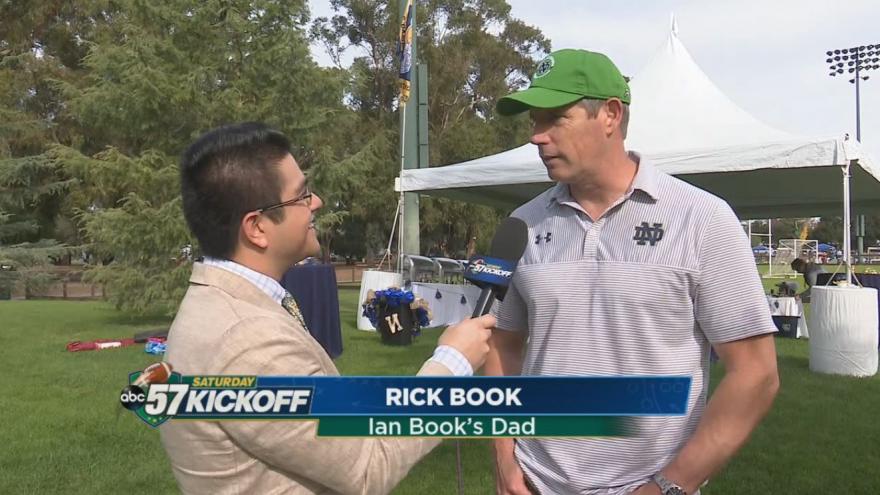 PALO ALTO, Calif. -- Scores of Notre Dame fans have made the nearly 2,500-mile trip to northern California to cheer on the Irish.

We caught up with some parents of the Fighting Irish where the tailgate was bittersweet for some of them because for the seniors, it’s their final game of the regular season.

Quarterback Ian Book's dad, Rick, hosted the parents of the Notre Dame Fighting Irish for a pregame gathering Saturday as they live near Sacramento.

"It's nice for the family and friends that can't make the trip all the way back to South Bend to come out here once a year -- either to USC or here at Stanford. So, we're happy to have them and even more excited to host Notre Dame Football player’s families that are coming in from all over the country,” said Book.

The team played their hearts out this year. Now, it’s the final game of the regular season. Head Coach Brian Kelly said the Irish have an outside chance to make the playoff run.

Book says the family is proud of their son and the team for having such a successful season so far.

“To be 9-2 after last year, We think it's remarkable. We think the boys have done a fantastic job. We think the coaching staff has really changed things for the better. So, all positives as far as we're concerned. Ian's had a fantastic year. Had some opportunities to go out there on the field. We're just excited for him and the entire team,” he said.

And after the North Carolina game, “He was excited. The fact is that was the first football game he'd played in over two years, you know, since high school. So, he got his juices flowing. Had a smile -- grinning ear to ear. We were happy for him and he was just happy for the team. He was able to win one on the road away with a team like North Carolina,” said Book as he spoke about his son.

For a final score prediction, Book put the Irish over the Cardinal by one score.

“Beat the Trees. I think it's going to be a tough game. So, I'm going to say Notre Dame by one score,” he said.