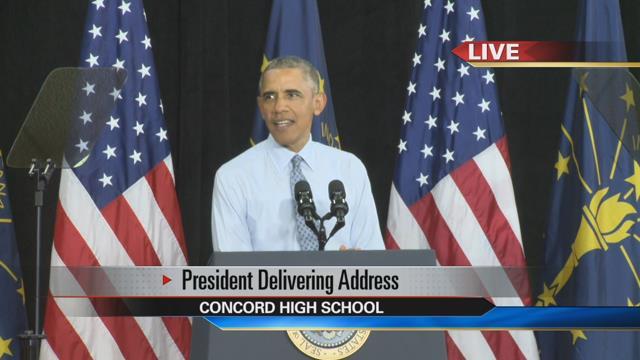 President Barack Obama spoke about the economy in front of thousands of people at Concord High School in Elkhart Wednesday afternoon. Then, spoke with Elkhart residents at a town hall hosted by PBS.

President Barack Obama is visiting Elkhart to highlight the economic turnaround in the city.

When the president visited in 2009, the unemployment rate in Elkhart was 19.6-percent. It is now 4.1-percent.

The presidential motorcade then headed on the bypass to Concord High School. He arrived around 3:15 p.m.

President Obama started off saying he brought a few of his friends - Senator Donnelly and Elkhart Mayor Tim Neese.

He said Elkhart is a good place to start the conversation about the economy. He said he visited last time just three weeks after taking office. At that time, the economy was in bad shape.

Elkhart was hit hard, he said. Nearly 1 in 5 was out of work.

"I told you then I had your back and we would work hard to get the economy back," said the president.

The unemployment rate is now 4-percent in Elkhart.

"The RV capital of the world has done its part," the president said.

He added the government has helped by investing in the auto industry, high tech manufacturing, green energy and the results are visible throughout the nation, and in Elkhart.

"We know a lot of people are still feeling stressed about the economic future," said the president.

The pundits say the reason Republicans have chosen the candidate they chose, is because no one pays attention to the plight of the working American.

"We've had setbacks, we've had false starts," said Obama. "But I have spent most of my presidency focusing on improving the middle class.'

Where people have a right to feel anxious is the longer term trend in the economy that make working families feel less secure. Wages are still growing too slowly, which makes it hard to pay for college or save for retirement, Obama said.

The gap between rich and poor is bigger now than any time since the 1920s.

The president says this makes Americans feel like they are not able to reach the American dream.

"While I may have won the state of Indiana just barely in 2008, I know I lost the vote in Elkhart. I definitely got whipped here in 2012. I know I don't poll well in this county, I'm not here looking for votes," Obama said.

He said he is here because, he cares deeply as a citizen.

He said you will have to decide which candidate will have a better economic policy, the president said. He said they define their agenda by who they are against.

"And that's basically against me," the president said.

He says he wants to clarify myths:

Myth: Government is just getting bigger.

President Obama says the government spends less than it did when Ronald Reagan was president and the deficit is getting smaller. It has been cut by 75-percent.

He says since the Affordable Care Act was signed into law, businesses have created jobs every single month. He says health care costs have gone down. Says an average family's health care is now $2600 less a year than before Obamacare.

Says all of these facts bust the myth that government spending is squeezing the middle class.

President Obama says he has issued fewer regulations and orders than previous presidents. The regulations they have issued are to protect residents and helped the middle class.

Myth: Other countries are killing us on trade.

A lot of supporters of trade deals in the past oversold. Obama says the benefits are widely spread, which is why the price of basic necessities have gone down.

Some sectors and communities have been hurt by international trade, but overall trade has helped the country more than it has hurt.

Most of the manufacturing jobs we've lost over the last decade were the result of technology and automation, not trade, the president said.

Myth: Immigrants are taking all our jobs.

The number of people trying to cross our border illegally is at its lowest level in nearly 40 years. It's lower than during Ronald Reagan's time.

New immigrants sometimes compete for service and agricultural jobs, but they also start 30-percent of the new businesses in America.

The president says immigrants aren't the reason our wages are low, it's because of CEOs.

He says it wouldn't help the middle class to deport illegal immigrants. Instead, they need to fix immigration.

Republican statements about the economy are not supported by the facts, Obama says.

Obama says he is concerned about the direction of our politics. The stories that are being told are not true.

We have to challenge the assumptions behind the economic story.

He said he wants everyone to have a fair shot.

He said wages are growing at a rate of about 3-percent this year, but we have to accelerate that. He added he has helped people get overtime pay.

He said women should get equal pay for equal work. That shouldn't be a partisan issue.

The reason wages haven't grown faster is because of politicians and lawmakers have made it difficult to bargain for a better deal. In the past, one in four people belonged to a union. Manufacturing jobs paid well because workers were unionized.

Today, only one in ten employees is in a union.

We should make it easier for people to unionize. Employers would benefit for doing what's right for their workers.

We also have to prepare our children for high tech jobs, Obama said.

He said we have to make college more affordable and the way to do that is to make 2 year community colleges free.

The president says we have to make it easier for people to save for retirement or bounce back after losing a job.

He said retirement security keeps people up at night. A lot of Americans don't have retirement savings and don't have pensions to rely on. We should be strengthening Social Security and increase its benefits.

He says the wealthiest Americans should pay a little more.

We should make trade work for us, not against us, the president said.

He said TPP overhauls NAFTA and allows us to set the rules in trade. It would allow us to trade on a level playing field.

Finally, he says we need to keep Wall Street in check and make sure people are paying their fair share of taxes.

"After the financial crisis, we passed the toughest Wall Street reforms in history," Obama said.

He said Republicans have been trying to weaken regulations on Wall Street.

He says Americans got hurt by the financial crisis and why would Americans want us to go back to what almost broke the economy.

He says when people don't pay their fair share of taxes, you are paying more or there isn't enough to fund universities or fix roads.

Middle class families paid lower income taxes than any other time since the 1950s, he said. But the wealthiest Americans are paying less than they used to.

Tax cuts for the wealthy will not help the middle class, it will help people like the presumptive Republican candidate for president.

He says you have a decision between more or less inequality. That's what is at stake in this election, the president said.

He says Republicans would hurt the economic growth the country has experienced.

"The one thing I can promise you, if we turn against each other, if we fall for a bunch of okey doke, we won't build on the progress we started," Obama said. "We have to build on our common values."

Whatever our differences, we all care about this country, and that's what makes us great, the president said as he ended his speech.

After the event at the high school, the president participated in a town hall hosted by PBS News Hour. The president heard directly from Elkhart residents during the event.