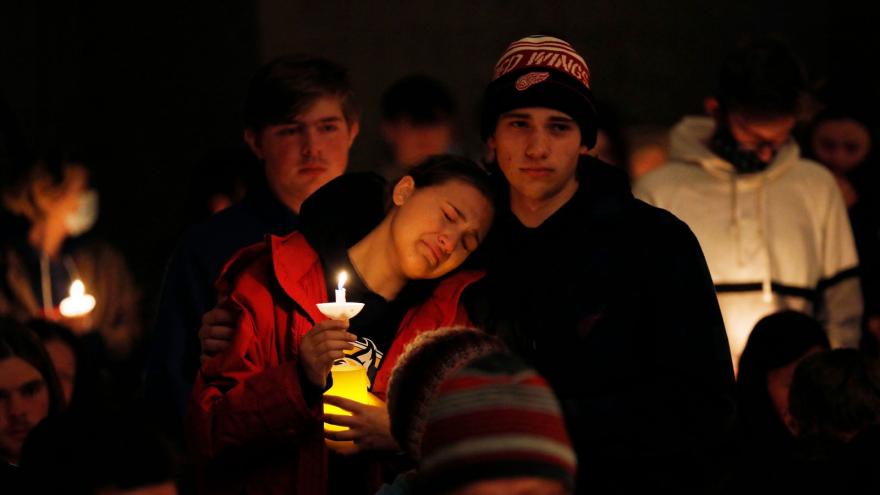 A person becomes emotional as students holding candles are asked to stand during a vigil after a shooting at Oxford High School at Lake Pointe Community Church in Lake Orion, Michigan, on November 30. Photo courtesy: Jeff Kowalsky/AFP/Getty Images

The 15-year-old suspect in Tuesday's deadly shooting at Michigan's Oxford High School is being charged as an adult with one count of terrorism causing death; four counts of first-degree murder; seven counts of assault with intent to murder; and 12 counts of possession of a firearm during the commission of a felony, Oakland County Prosecutor Karen D. McDonald said Wednesday.

"It is possible there could be additional charges" when an investigation is complete, she said.

The suspect will be arraigned Wednesday afternoon, she said.

The terror at Michigan's Oxford High School that left four dead started with gunfire, yelling and an urgent message on a loudspeaker.

Then frightened students barricaded doors, phoned for help and picked up anything they could grab in case they needed to fight back.

Aiden Page. a senior, was in a classroom when he heard two gunshots Tuesday afternoon -- part of what authorities called a sophomore's "absolutely cold-hearted, murderous" rampage that left four students dead and seven other people injured in the deadliest shooting at a US K-12 school since 2018.

Just like in the active shooter drills they'd practiced, Page watched his teacher run in and lock the door, then students shoved desks against it, he told CNN's Anderson Cooper.

"We grabbed calculators, we grabbed scissors just in case the shooter got in and we had to attack them," he said, describing how a bullet pierced one of the desks they'd used to block the door.

In a sign language class, freshman Mark Kluska heard someone announce a lockdodwn over the school's loudspeakers. His teacher shut the door and fixed it with a metal doorstop.

"I started realizing it was real when I began to hear yelling," Kluska told CNN.

Later, someone outside the room who claimed to be with the sheriff's office told Kluska and his classmates that all was safe and they could come out, a video the freshman recorded shows.

"We're not willing to take that risk right now," the teacher replies.

It's not clear who the person at the door was. But the teacher quickly signaled students to scramble out a first-floor window into the snow, Kluska said. From there, they raced across a courtyard to another part of the building, where a law enforcement officer herded them to safety.

More than 100 calls to 911 were made. About two to three minutes after officers arrived, they found a suspect -- a 15-year-old -- and took him into custody without incident, Oakland County Sheriff Michael Bouchard said.

Four students died as a result of the attack at the school some 40 miles north of downtown Detroit -- Madisyn Baldwin, 17; Tate Myre, 16; Hana St. Juliana, 14; and Justin Shilling, 17, authorities said.

Shilling died Wednesday morning at a hospital; the others died Tuesday, the sheriff's office said. Myre died in a patrol car while a deputy was taking him to a hospital, Bouchard said.

Seven others -- six students and a teacher -- were shot, Bouchard said.

Among the wounded were a 14-year-old girl who was on a ventilator following surgery, Bouchard said Tuesday night. A 14-year-old boy had a gunshot wound to the jaw and head, while the teacher who was shot had been discharged.

The attack was the deadliest US school shooting since eight students and two teachers were slain in May 2018 at Texas' Santa Fe High School, according to a CNN tally. There have been 48 shootings this year on K-12 campuses, 32 of them since August 1.

The suspect, who has not been identified by police, was being held at Oakland County Children's Village, a juvenile detention facility. He was placed on suicide watch and was being checked on every 15 minutes, County Executive David Coulter said.

The weapon deputies said was used in the shooting, a 9mm Sig Sauer SP2022 semiautomatic pistol, was purchased by the suspect's father on Friday, four days before shots rang out at the school, Bouchard said.

Two 15-round magazines were found at the scene, and the gun had seven rounds of ammunition, Bouchard said. Investigators recovered more than 30 shell casings, said the sheriff, who'd earlier said at least a dozen rounds were fired.

Video from the school shows the assailant was "shooting people at close range -- oftentimes toward the head or chest," Bouchard told CNN's "New Day" on Wednesday.

Though much of the shooting was at close range, it nevertheless appeared "random," Bouchard told CNN, without elaborating.

The assailant "tried to breach classroom doors," the sheriff said.

"He actually fired through a number of the doors that I looked at last night -- through the barricaded doors. ... Some of those barricades were struck by gunfire," Bouchard said.

Bouchard praised the work of his deputies and other local law enforcement agencies that responded Tuesday, saying their coordination and active shooter training proved invaluable.

Deputies were dispatched to the school at 12:52 p.m., and the suspect was in custody within three minutes of their arrival, Bouchard said.

As deputies made their way through the school, they encountered the suspect, who then put his hands up, Bouchard said. Deputies took the gun and placed the suspect in custody.

"I believe they literally saved lives, having taken down the suspect with a loaded firearm still in the building," Bouchard said.

'We believe we have some writings that contain his thoughts'

As for investigation into a motive: "We believe we have some writings that contain some of his thoughts," Bouchard said Wednesday, adding he didn't immediately know whether the writings reveal intent.

Investigators executed a search warrant at the suspect's home and have searched the school, he said. Authorities seized a phone and are examining other seized items.

Michigan law prevents police from talking to a juvenile without parental permission, and the parents have refused that permission and requested a lawyer, Bouchard said.

"So, we can't get the motive from the suspect that we have in custody, but we think we've got a path to get a lot of supportive information as to how and why this occurred. We've recovered some evidence that we're now beginning to pore over," Bouchard said.

Authorities also are investigating pictures of a target and the weapon posted on social media by the suspect, he added.

'I'm going to text my family, say I love them'

As hundreds of law enforcement officers swarmed the campus Tuesday, students and teachers relied on tactics they'd learned in active shooter drills to protect themselves.

"This district has been very good in training their personnel and their students on active shooters," Undersheriff Michael McCabe said.

Kluska's teacher, Moises Cortez, jumped into action after a lockdown was announced over the school's loudspeakers, said the student who recorded video of his classmates escaping through a window.

"He shut the door and put, like, a metal doorstopper so no one would be able to kick in the door." Kluska told CNN. "After he turned off the lights, he told us to get to the corner because this might not be a drill and he wants to be safe."

People were injured as they rushed out of the school, Bouchard said. Most were treated and released at a nearby staging area.

Donna Sanders' youngest grandchild was changing classes when he heard gunshots, she told CNN. He and others ran through an exit door and went to a nearby grocery store to escape, he told her.

"He was able to run to safety with others while his brother was trapped inside," Sanders said.

Sanders' daughter, Vontysha Pittman, said her oldest son sought safety in a classroom with a teacher and other students. He hid under a desk and called his father to tell him what was happening, she said.

"They are both are safe at home, but they are broken. We need prayers and not just for us but all the families at Oxford," Sanders said.

Page's classroom was in lockdown for an hour, the senior told CNN. The entire experience as "insane" as he contemplated whether he would live through the ordeal.

"The very first thing in my head was, 'Is this actually happening? I'm going to text my family, say I love them just in case, if I were to die.' Then when everything calmed down for a second, I was able to catch my breath and rationalize things," he said.

'There are no unwounded students or staff today'

Prosecutors are weighing the evidence and will decide whether to charge the suspect as an adult.

Prosecutor Karen McDonald's office has "begun the process of receiving information regarding the investigation" into the shooting. "It is our intent to review it thoroughly and issue appropriate charges quickly," according to its statement Tuesday.

All schools in Oxford's district will be closed for the rest of this week because of the shooting, a post on the district's website reads.

As investigators comb the school for evidence, community leaders vowed to work in coming days to heal the shattered sense of security.

"There are no unwounded students or staff today. Everybody in the Oxford community, Oakland County and frankly, the United States has been impacted by this tragedy, said Coulter, the county executive. "Tragedies like this rip away at our security ... a security and a peace that should be rightfully ours in a place like a school."

"I think this is every parent's worst nightmare," said Gov. Gretchen Whitmer, who added that shootings at schools are "a uniquely American problem that we need to address."

"My heart goes out to the families. This is an unimaginable tragedy," she said. "I hope we can all rise to the occasion and wrap our arms around the families, the affected children and school personnel and this community."