Spring 2021 Flood Outlook: Rapid snow melt not expected to be a major problem

It was three years ago this week that more than five inches of rain and more than a foot of melting snow combined to create some of the worst flooding Michiana has ever seen.

Though we had a similar snowpack this February across the area, a repeat of 2018 is NOT expected.

Despite the rapid melt, Michiana rivers and streams are staying well within their banks, mainly due to temperatures remaining mild instead of warm and a lack of major rainfall.

The melt is on, but the St. Joe River is well within its banks.

The Edgewater neighborhood in South Bend was flooded in FEB 2018. #inwxpic.twitter.com/VkB4Y6yseN

Levels on the St. Joseph and Elkhart Rivers are not forecast to approach flood levels throughout the month of March.

A similar scenario will likely play out with the Yellow River in Plymouth.

Looks good for now. Nowhere near any flood stage and the melt is more than half over. #inwx#floodinghttps://t.co/22jRbXdIj9pic.twitter.com/KkGWtlFNvz

Minor flooding is possible on the Tippecanoe River in portions of Starke and Pulaski counties by the second half of March. However, the more likely scenario is that river levels stay in "action" stage, or just below minor flooding. 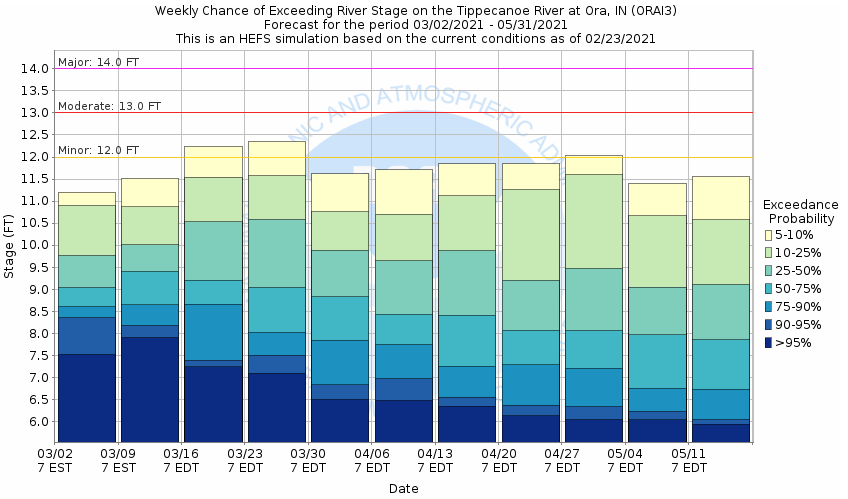 While the flooding outlook for Spring 2021 looks tame for now, conditions can change quickly, specifically when ice jams arise.

Rivers rise as they respond to the snow melt, but areas of ice can slow down or temporarily stop the flow of certain waterways, which can then lead to localized flooding upstream of the jam.

We'll continue to monitor river conditions as we get more mild weather to start March!