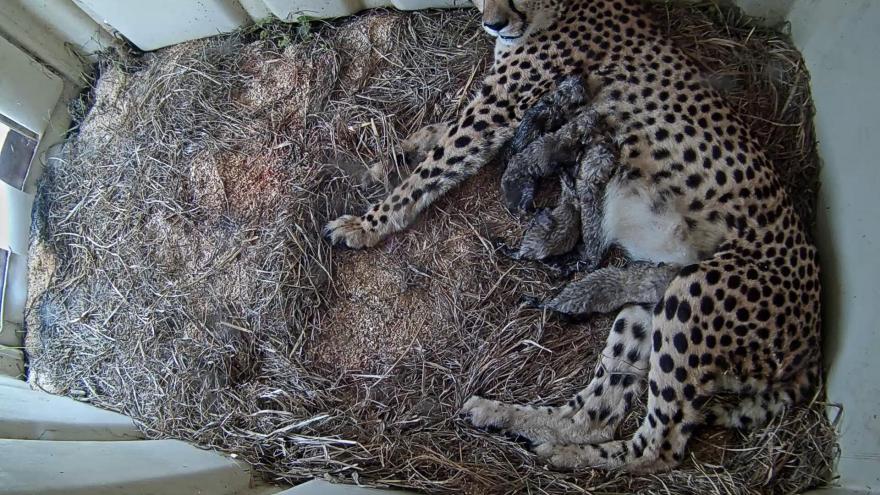 Animal lovers can see the new cubs via a live webcam.

(CNN) -- Say hello to a litter of cute, newborn cheetahs.

The world is getting a chance to see them via the Cheetah Cub Cam, which features live footage of the den.

Sometimes viewers can hear the newborns chirping. That means they are hungry, cold or looking for their mom, a 5-year-old cheetah named Rosie, according to the institute's website.

"Seeing Rosalie successfully care for this litter -- her first -- with confidence is very rewarding," said Adrienne Crosier, cheetah reproductive biologist at SCBI and head of the Association of Zoos and Aquariums' Cheetah Species Survival Plan, in a statement.

Nick, a 10-year-old cheetah and the first of his species to be born at SCBI, sired the litter.

The two cheetahs were bred on July 9 and 10, and SCBI veterinarians confirmed the pregnancy using ultrasounds on August 16.

The cheetah -- a rare cat

SCBI is one of 10 cheetah breeding centers in the United States that are a part of the Cheetah Breeding Center Coalition, a group committed to establishing a cheetah population in North America that is under human care.

About 7,000 to 7,500 cheetahs remain in the wild, the statement said, living in various pockets of Africa and part of Iran.

Staff at the zoo have been giving the cheetahs their space so Rosalie can bond with her babies. This includes grooming, nursing and later playing with her cubs.

Because keepers are giving the new family time to bond, they do not know the sex of the cheetah cubs.

"As webcam viewers watch our cheetah family grow, play and explore their surroundings, we hope the experience brings them joy and helps them feel a deeper connection to this vulnerable species," Crosier said in a statement.