For many, pumpkins only come to mind once we hit autumn. Farmers are hard at work long before Halloween though, as the crop grows through the warmer months. The most bountiful years are ones with lots of summer rain, but 2021 was hot and dry.

June and July are critical times for pumpkins. Dry weather during planting season can be good for a brief time period, as it allows farmers to get the seeds into the ground. However, if it stays too dry, the seeds won't start growing.

Kenny Stover is the fifth generation owner of Stover's Farm Market & U-Pic in Berrien Springs. His pumpkin patch was constantly running water to the young plants to try to make up for the lack of rain.

"We do have trickle irrigation, but in a year like this when it's just so hot and dry and humid, that's only helping the plant to stay alive," Stover explained. "It is not helping it thrive to make the nicest pumpkins. There is no greater water source than it coming from the sky."

In addition to rain, lightning provides nitrogen to the pumpkins. This is crucial for them to grow.

"When you get a little electricity in those clouds and that rain comes down, it does wonders for things," Stover said.

The lack of rain and lightning did prove to be a bit challenging for farmers, and ultimately led to a smaller crop.

"Out of probably seven acres of pumpkins this year, we harvested three," he noted. 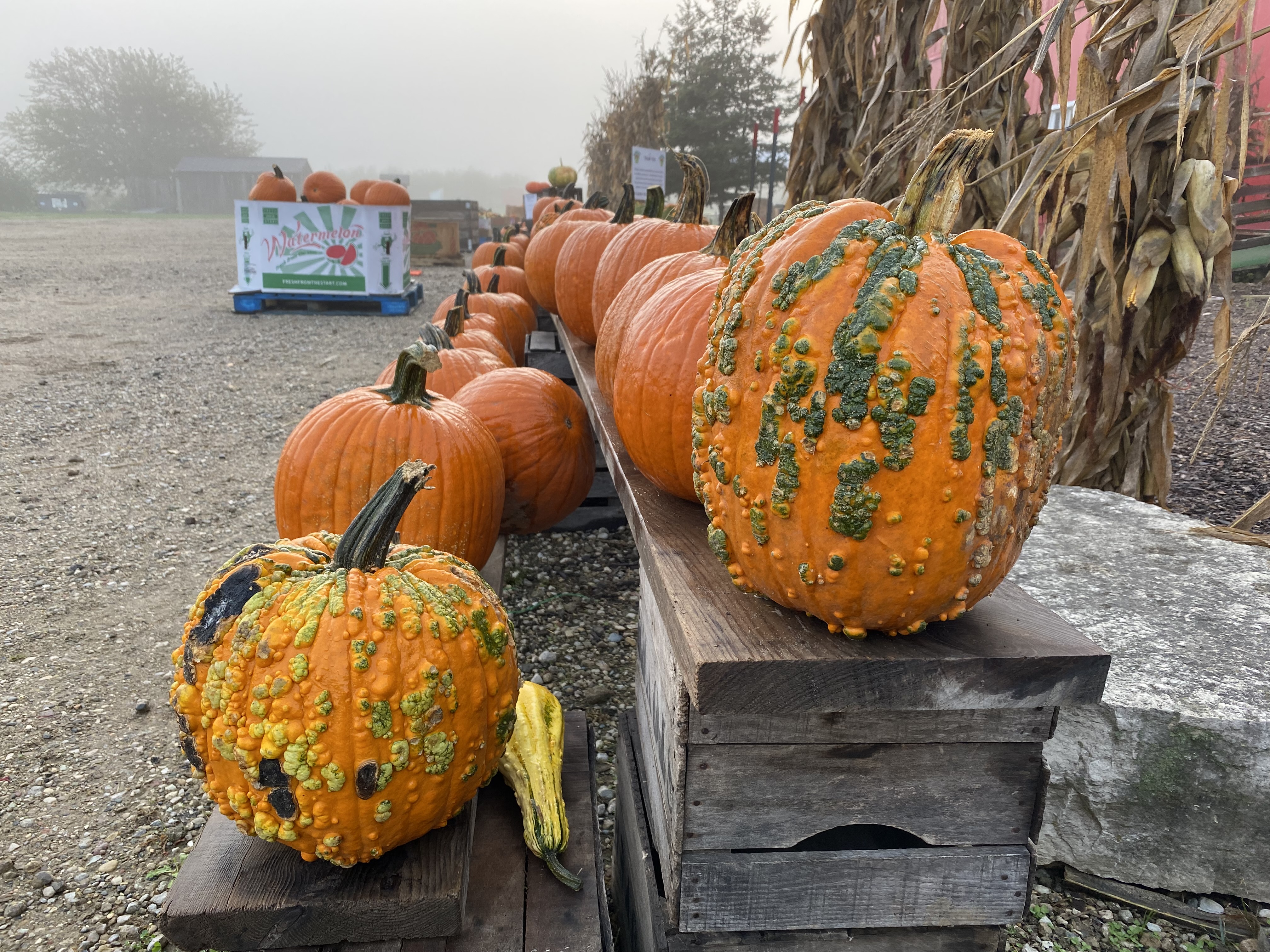 Pumpkins outside of the farm market

There are still plenty of pumpkins for you and your family to choose from at the big red barn off of M-139. The smaller number of pumpkins actually created larger pumpkins, which is great news for those who love carving jack-o-lanterns.

"Because there was a lack of pumpkins per plant, a lot of the pumpkins that we have this year are bigger than we're accustomed to," Stover explained. "We have a lot of nice 25, 30, 40 pound pumpkins." 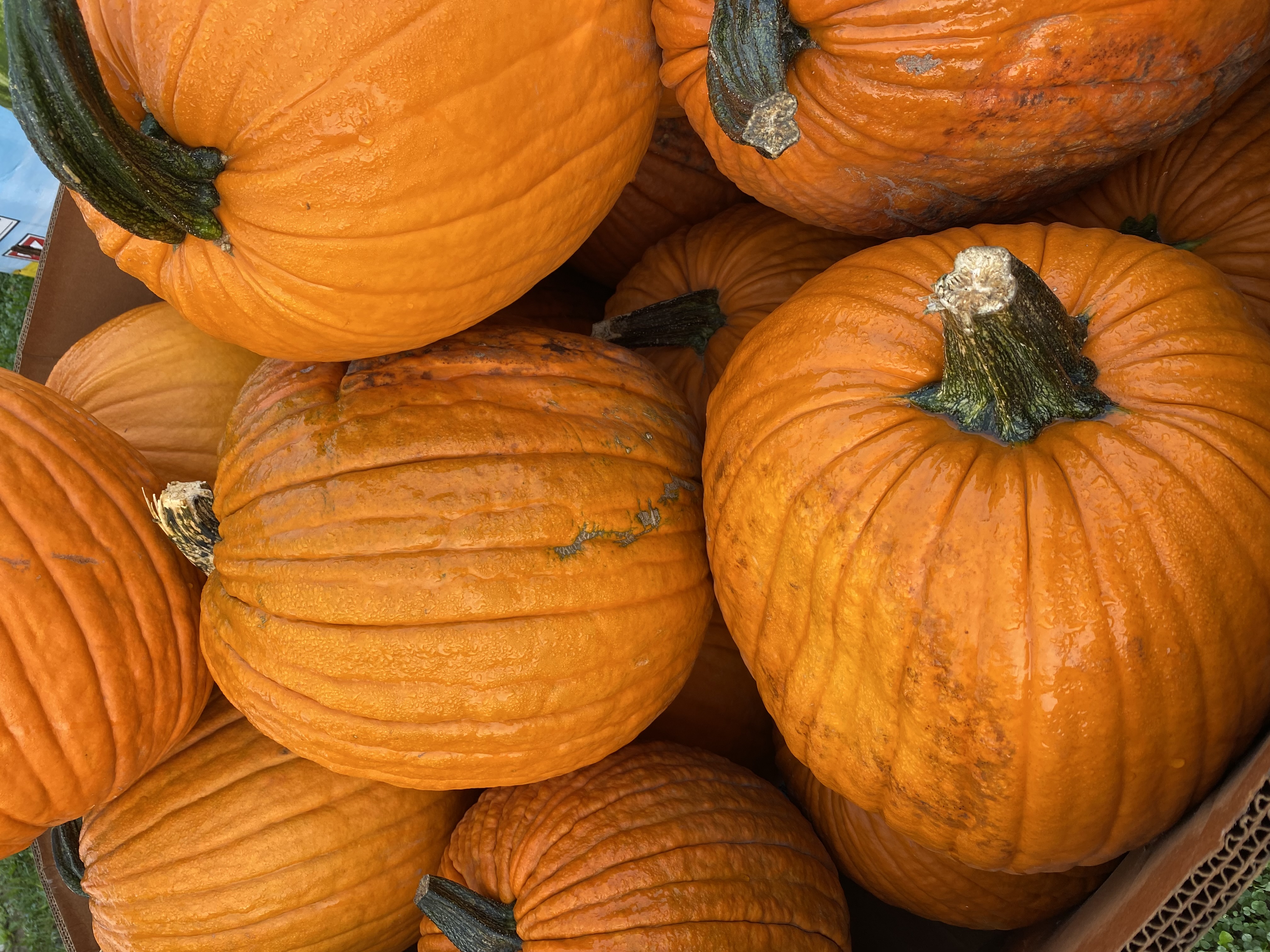 Plenty of pumpkins available this year, and notice that they look larger than other years

No matter the weather, pumpkins also depend on honeybees to grow. Krispn Given is a honeybee researcher from Purdue University.

"It takes like 15 visits per flower from a honeybee to pollinate a pumpkin," Given explained. "That's one reason pumpkin growers rent honeybee colonies. So they get more pumpkins, bigger pumpkins."

If young plants don't get those 15 visits by bees, later in the season you might find smaller or asymmetrical pumpkins. Given says native bees can also help the process, but renting an entire honeybee colony can be enticing for large farms.

This happens in Michiana. Stover's rents about 45 beehives as their pumpkins are growing, then send them off to Georgia during the cooler months.

Thanks to the bees and the irrigation, pumpkins are ready to go now at Stover's.

During my visit, the last truck full of pumpkins from the patch had made the journey to the farm market, so what you see there is what's available. There are huge crates of pumpkins, so there is no need to worry about them running out before your visit.

"We should have enough pumpkins to get us up until Halloween," Stover said confidently.

If you want to visit, Stover's is open every day but Sunday from 9 a.m. until 5 p.m.