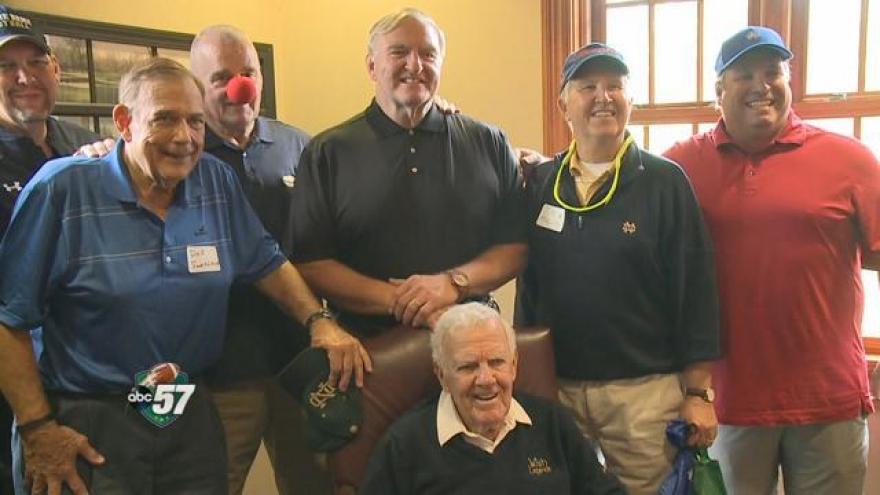 In 1966, Notre Dame and Michigan State faced off in what is considered the game of the century. The game ended in a tie. Fifty years later, the game is still being discussed by fans and by the players in that historic game.

It's a beautiful day on the Warren Golf Course, a place where scratch golfers and hackers alike can enjoy a round and some good conversation.

The topic is football.

"I don't think we've had this many quarterbacks in an awful long time," said Terry Hanratty.

Hanratty would know a thing or two about quarterbacks. He was the two-time All-American quarterback who led the Irish to the 1966 National Championship.

The man next to him, George Goeddeke, was the man Hanratty took snaps from under center.

"Let me bend over so Terry recognizes me," said Goeddeke.

Neither would be at the golf outing celebrating the 1966 National Championship team without their coach Ara Parseghian.

The game of the century was between number one ranked Notre Dame and number two ranked Michigan State.

The game ended in a controversial 10-to-10 tie because Parseghian decided to run out the clock.

That's why all three of the Irish legends were at the golf course.

"We are celebrating a great weekend, which is the 1966 National Championship team," said Mike McCoy.

McCoy was an All-American defensive tackle for Coach Parseghian and the gang.

He has a ministry that tackles everyday problems kids have by encouraging them to make better choices.

This outing not only benefits his charity but is also a reason for the gang to get back together again.