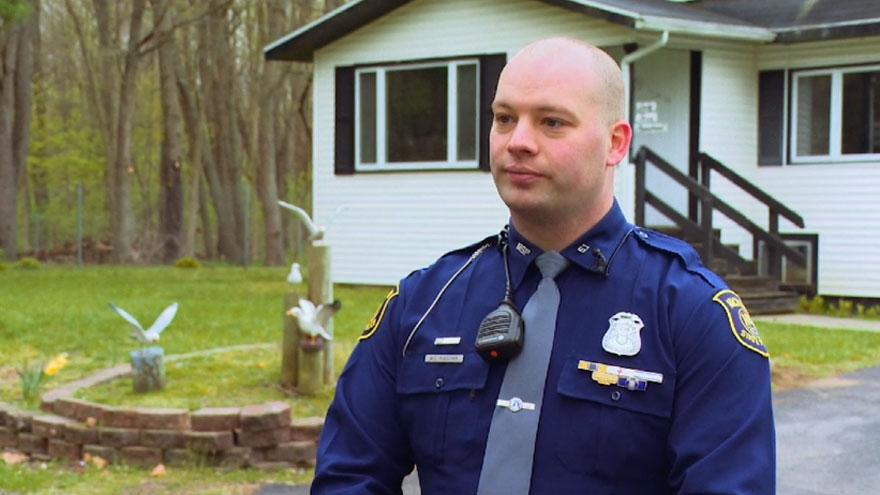 A Michigan State Police trooper with the Paw Paw post was named Trooper of the Year by the International Association of Chiefs of Police.

Trooper Mark Fletcher was honored for his actions during a deadly home invasion in Comstock Township. He and two fellow officers were shot in the incident.

“We are proud to honor Trooper Fletcher as the 2020 Trooper of the Year for his courageous actions and selfless commitment to his fellow officers,” said Governor Gretchen Whitmer. “Trooper Fletcher has served the people of Michigan honorably and embodies the qualities of a true public servant.

On Dec. 1, 2019, Fletcher responded to a home invasion in which one of the residents had been taken hostage by the intruder. Upon arriving at the scene, Fletcher and his fellow officers determined the home was occupied by an adult male and female, and their young daughter. While the two females were able to flee to an upstairs room, the male was taken hostage by the armed intruder in a downstairs bedroom. As the officers planned a course of action, they heard a gunshot from inside the home, causing them to immediately make entry in an attempt to rescue the family.

Once inside, and when they determined the male hostage was unharmed, they safely rescued the woman and her child. As the officers attempted to negotiate with the gunman, he continued to fire shots intermittently through the floor and walls into adjacent rooms, eventually striking three of the responding officers, including Fletcher.

The gunman ultimately broke a window and left the residence, but he didn’t get far, as officers outside the home were able to apprehend him and take him into custody. It was later determined that the gunman killed the male hostage before fleeing the home.

Thankfully, the wounded officers recovered from their injuries and Fletcher returned to duty a few weeks later.

“Trooper Fletcher’s bravery while under fire and his concern for others over himself is admirable and in keeping with the highest standards of our profession,” said Col. Joe Gasper, director of the Michigan State Police. “His selfless and courageous actions are what we hope to instill in our troopers when they find themselves in such harrowing circumstances.”

Fletcher joined the MSP in June of 2017.