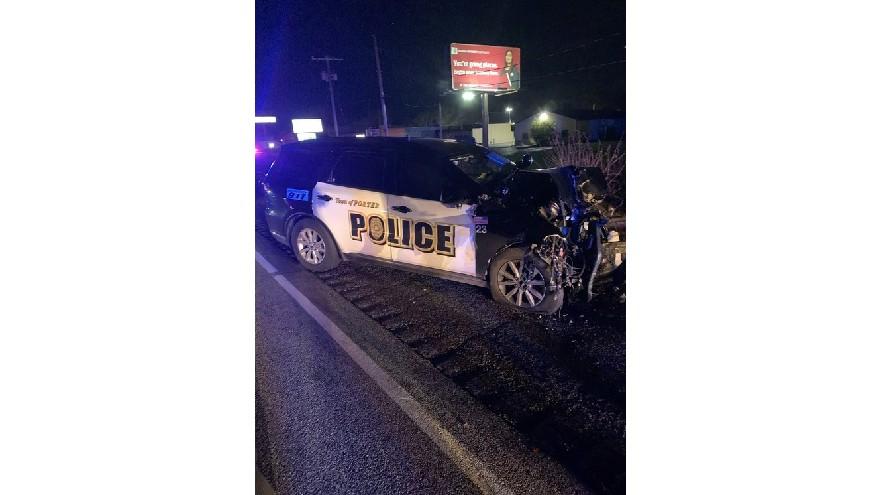 PORTER COUNTY, Ind. -- The Indiana State Police received a call Saturday night alerting them of a kidnapping victim traveling eastbound on I-94 from the Illinois state line.

The caller informed troopers that her daughter was being held against her will and the offender was armed with a handgun.

A little after 7:00 p.m., troopers located the suspect vehicle on I-94 near Burns Harbor and attempted to make a felony traffic stop.

The driver initially pulled over but after coming to a complete stop, quickly sped away at a high rate of speed.

The trooper was however able to observe several people in the vehicle, one of which appeared to be the kidnapped female.

A pursuit followed as the driver headed eastbound on I-94 until exiting at S.R. 49, where he turned left driving northbound in the southbound lanes.

Three Porter Police Officers were driving with their emergency lights activated in the southbound lanes, when they noticed the vehicle driving directly toward them at a high rate of speed.

One of the police vehicles, a 2021 Dodge Durango, was struck head-on by the fleeing suspect causing the officers car to rotate and come to rest facing northbound.

The suspects vehicle was brought to a stop in a nearby ditch.

Two occupants immediately exited the vehicle and fled the scene as troopers pursued them on foot.

During the chase, one of the suspects was tased and taken into custody at a nearby Phillips 66 gas station.

The second suspect managed to escape officers until the Chesterton Police Department received a call of a suspicious male asking to use a phone at the same Phillips 66 Sunday morning.

When officers arrived, another foot-chase ensued but officers quickly chased him down and took him into custody.

Both suspects are currently being held at the Porter County jail.

The handgun was recovered during the original pursuit on Saturday evening.

An investigation into the kidnapped female is being conducted at this time.

The officer injured during the pursuit, Corporal Scott Cornelison, is a 16-year veteran of the Porter Police Department.

He was transported to Northwest Health-Porter with serious non-life-threatening injuries.