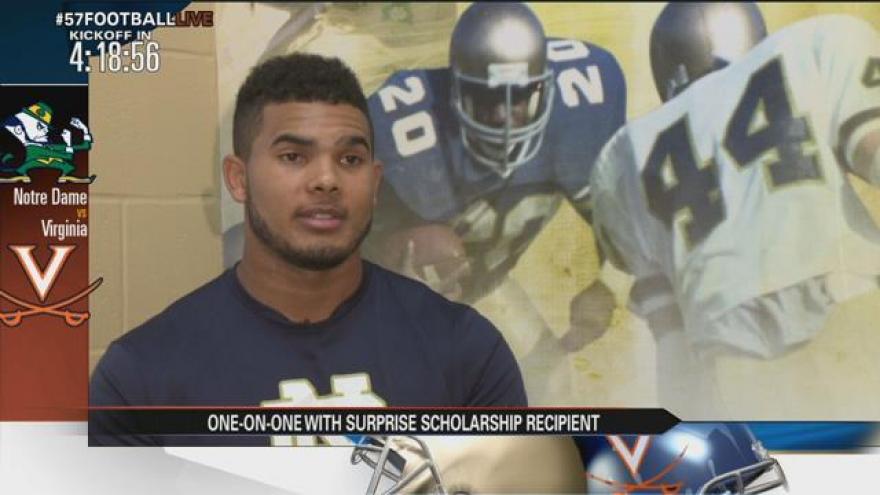 A few weeks ago, running back Josh Anderson was modeling the Shamrock Series uniform when he was surprised with a scholarship and a permanent place on the Notre Dame football team. Anderson sat down with ABC57's Emily Evans to talk about that moment.

When Anderson was asked to model this year's Shamrock Series uniform, he figured - why not?

“We need somebody to model the new Shamrock Series uniforms, don’t tell anybody, it’s around your size, so I think it’ll be nice. So I said OK, I wouldn’t mind getting up there in front of my teammates, having a good time," Anderson said.

He had no idea what was coming next - or how it would change his life.

“I was in total shock," Anderson said.

In that moment, in front of all 114 of his teammates, Coach Kelly announced Anderson would be awarded a coveted scholarship to Notre Dame.

But that surprise scholarship was just the first part of a dream come true.

“I was waiting my whole career just to get a chance to get out on that field," Anderson said.

For the first time in his college career, he hit the Notre Dame turf as member of the Fighting Irish.

“I don’t think my parents ever expected me to be out there on that field for the game opener," Anderson said.

They were no doubt proud to see him debut last Saturday in the home opener against Texas. And he says when his name was called to get in the game—he didn’t hesitate.

“I’ve been preparing for those moments the past three years of my life," Anderson said.

The senior running back had two carries for the Irish.

It was another 'pinch me' moment for Anderson.

Anderson is thrilled to be a part of the team and his teammates seem as genuinely excited for his future as he is.

Living the dream doesn’t stop there for Anderson. He says he's working on getting into medical school.