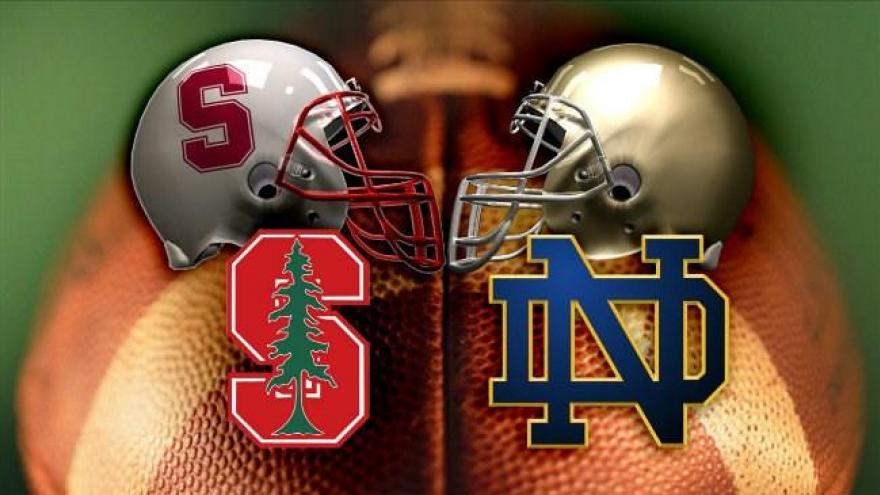 The Notre Dame Fighting Irish took on the Stanford Cardinal, Saturday under the lights of Notre Dame Stadium.

The Irish, a three-point favorite, were looking to rehabilitate their 2-4 record after their most recent loss to North Carolina State.

Notre Dame would begin the game defending the ball against Stanford.

With 4:20 to go in the first quarter, ND's Jonathan Bonner forced a Cardinal fumble at the Notre Dame 26-yard line. Irish cornerback, Julian Love, would recover the ball and set the Fighting Irish up for a successful following possession.

After the fumble, the Irish would only need six plays to collect their first touch down. ND quarterback and NFL prospect, DeShone Kizer would run the ball in for his 7th rushing touchdown of the season. Justin Yoon kicked the extra point and the Fighting Irish were up 7-0 heading into the second quarter.

In the second quarter with 6:49 to go, Kizer would attempt a TD pass to tight end Nic Weishar. However, the pass was incomplete. Not letting the field position go to waste, Yoon would return to the field to kick a field goal putting Notre Dame up 10-0 over the Cardinal.

Only 42 seconds to go in the half and Cole Luke of Notre Dame would intercept a pass meant for a Cardinal receiver. This would send the teams into halftime.

Stanford, only two minutes into the third quarter, executed a clean pick off of Kizer. Cardinal Quenton Meeks intercepted Kizer's pass and took the ball 50 yards for Stanford's first score of the game. Cardinals put themselves only three points behind the Irish with a score of 10-7.

Following the previous interception, Notre Dame repossessed the ball but it wouldn't last for long. The Irish would go for it on fourth down and Kizer is picked off again by the Cardinal. Stanford would take control of the ball at the ND 47-yard line.

The Fighting Irish would answer right back with 7:26 to go in the third quarter. Stanford quarterback, Ryan Burns, would be sacked by ND's Jonathan Jones who forced the fumble. Notre Dame recovered the ball at the ND 34-yard line.

Malik Zaire would temporarily replace Kizer in the third quarter, making his first appearance in the game.

With 1:17 to go, Stanford snagged a safety from Notre Dame as the Irish lost 5 yards on the play. The Cardinal close in on one point, 10-9 Notre Dame.

The teams would head into the final quarter of the game at the close score of 10-9, the Irish still in the lead.

After a wild final drive for the Irish, they were unable to answer back to the Cardinal. Notre Dame would add another loss to their season. The 2016 Irish Football record dropped to 2-5.

Notre Dame will play next on October 29th against Miami at Notre Dame Stadium.