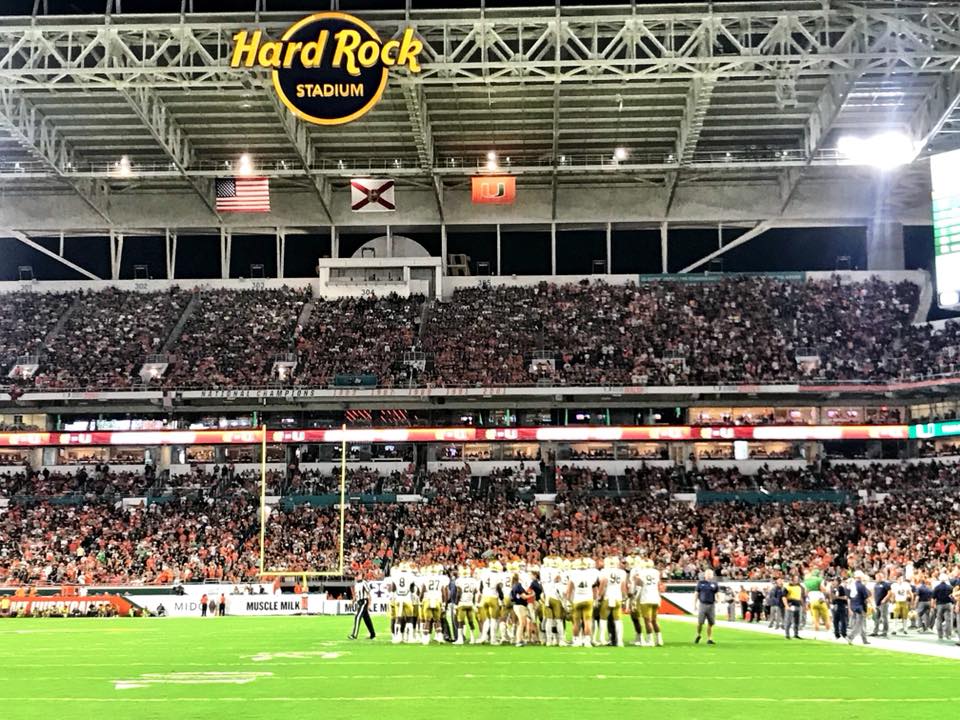 MIAMI GARDENS, Fla. -- The Notre Dame Fighting Irish would take on the storm of the Miami Hurricanes at Hard Rock Stadium in Miami, Florida Saturday night.

The Hurricanes rained on ND's parade early in the game. Toward the end of the first quarter, Miami quarterback Malik Rosier drove his team down the field to eventually connect with wide receiver Braxton Berrios to get on the board first. The extra point was good and Miami took an early lead of 7-0.

Miami was all over both sides of the ball. On the ensuing Notre Dame possession, Irish Quarterback Brandon Wimbush's intended pass to Tony Jones Jr., ended up in the hands of a Hurricane defender. MIA would take over at the ND 32-yard line with 3:09 left in the first quarter.

Another Miami TD. Wimbush throws his first INT since Week 3 against B.C. and Rosier runs it in. 14-0 Canes. #NotreDame#NDvsMIA

Two plays later Rosier would keep the ball for a touchdown. The score would round out at 14-0 Miami going into the next quarter.

The second quarter would start off with a Miami possession and an extra three points via a field goal for the Hurricanes. They add insult to injury with a growing score of 17-0.

With 7:20 left in the half, Brandon Wimbush would attempt a pass on 1st and 10 but it would once again land into the arms of a Hurricane. Miami would take over at the ND 9-yard line but failed three touchdown attempts, forcing the orange and green to go for three. The kick was good and Miami continued to lead 20-0.

It would be interceptions all night. With about 30 seconds to go in the half, ND QB Ian Book's pass was picked off, and this time, taken all the way for a touchdown by MIA defender Trajan Bandy. The teams would go into halftime with a score of 27-0.

Miami would carry their dominance into the second half of the game. Taking up the first five minutes of the third quarter along with 11 plays, DeeJay Dallas of the Hurricanes took the ball to the endzone for another touchdown. Miami extended their score by seven after the kick, 34-0.

With about five minutes to go in the quarter, Wimbush finally has a successful connection with tight end Alize Mack for an Irish touchdown. They're on the board with eight after a 2-point conversion. Miami would still hold the lead of 34-8.

Most of the fourth quarter would be quiet other than a final touchdown by the Hurricanes as Dallas takes it in again.

They went on to upset Notre Dame 41-8 in Miami.