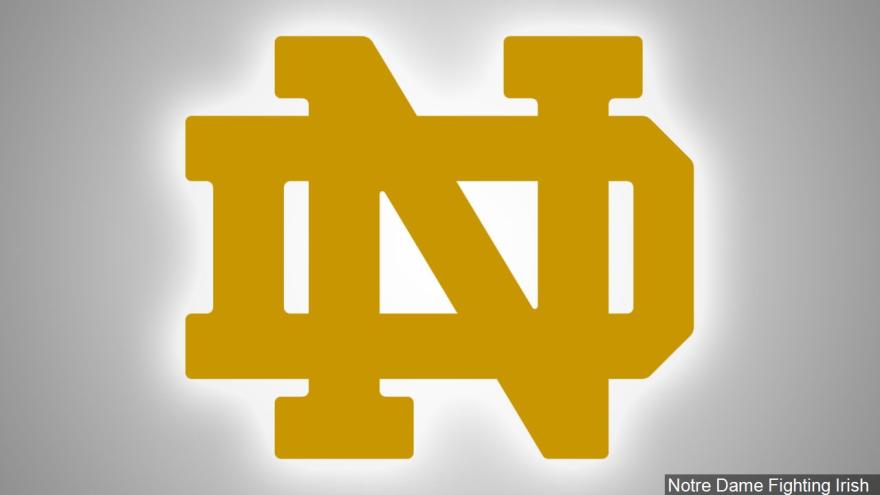 OMAHA, Neb -- Notre Dame is 1-1 through two games in their first trip to the College World Series in 20 years.

Notre Dame has been one of the hottest teams in college baseball and things looked great on Friday.

They took down the Texas Longhorns, a team who has more trips to Omaha than any other team in this year’s tournament but in game two, they struggled against an Oklahoma.

A team who’s been playing lights out, since arriving to the College World Series.

The Irish hit two homeruns on 11 hits for the in their first game against Texas.

Both Jared Miller and Carter Putz went yard on the Longhorns, in the first and final inning of the game, just how they drew it up.

“When you get out there and there's all the fans and all the pressure, you kind of just zero in and just the pitcher and the ball and you. You just want to find a barrel,” said Miller.

Fueled by their pitching, the Irish had a successful night at the plate, on the back of ace pitcher, John Michael Bertrand.

“Just kind of having confidence through preparation. So, knowing that when you get out there that rubber is 60 feet, 6 inches away. You look down at it and you know it's not going to move and it's the same thing. You're just going out there taking it one pitch at a time,” said Bertrand.

“JM pitched great. We had it. Not saying we had it right where we wanted it, but we had it once he got deep enough in the game,” said Head Coach Link Jarrett.

“Yeah, when JM takes the mound we feel really confident. We know he's going to pound the zone,” Miller added.

Pitching was the name of the game against Texas, but it was the tale of two games after facing Oklahoma on Sunday.

“They outplayed us in essentially every phase of the game. I thought Horton was outstanding. When you have mid-90s, you have a good slider, you have a curveball, any flashes change periodically. I mean, that was a lot,” Jarrett said.

The Irish faced Oklahoma freshman cade Horton and he had his way with Notre Dame’s lineup.

The righty looked he he’d been here before, throwing 100 pitches, through six innings, and a career high 11 strikeouts.

“His slider was tough to pick up. And I mean he did a good job. He had a good fastball and good secondary stuff and he was in the zone the whole day,” said Catcher David LaManna.

LaManna earned one of the seven hits on Horton, putting the Irish on the board with a two-run shot to left field, trailing 5-2.

That wasn’t enough for the Irish as they failed in all aspects of the game.

Even their fielding, which isn’t normal for one of the best defenses in the country.

“Dave's home run was a big boost for us. We needed it. And carter had competitive at-bats all day. It just wasn't consistent enough. But at the end of the day when you strike out 14 times you're not forcing them into enough and they beat us,” Jarrett added.

Next up for the Irish is Texas A&M on Tuesday at 2 p.m.