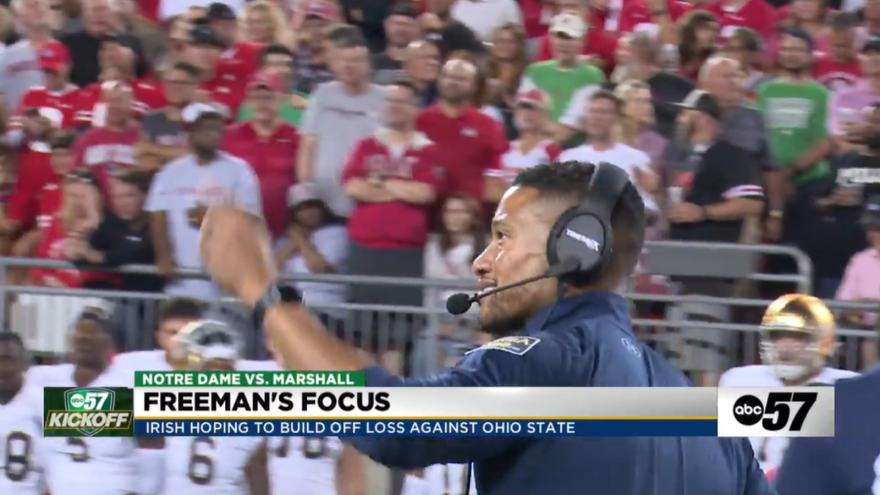 ST. JOSEPH COUNTY, Ind. - Sometimes you have to take a look back before you can move forward.

Normally during game week –- when we talk to players and coaches –- it’s all about the next opponent.

But when talking with Head Coach Marcus Freeman this week, it was all about dissecting what went wrong last week at Ohio State.

"There’s no such thing as a moral victory. We didn’t win. We didn’t finish the game. We didn’t execute."

Coming out of halftime, the Irish lead 10-7 but the play that has everyone talking happened with 17 seconds left in the third quarter.

And ultimately, a touchdown from CJ Stroud to Xavier Johnson.

"If we could, again, go back and do it over again, I wouldn't change the call probably just change the way we communicate the execution of it."

While the Irish were held to 253 yards of total offense and zero points in that second half, they also managed not to turn the ball over.

But the fact still remains –- the Irish have a lot to improve on for the home opener.

"This hopefully is the floor, this is the foundation of what we have to build off of. And, again, I'm proud of the performance that they showed on Saturday, and I look forward for building from here.:

The team will attempt to make corrections against their next opponent, the Marshall Thundering Herd.

"As we continue to move forward, we want to continue to establish the run, but also make sure that we exploit some holes in the pass game."

The plan was to use the run game to open the pass game and although it didn’t go well against Ohio State, Freeman is sticking to his plan throughout the season.

"The ability to do them both right, to be able to run the ball and then you know, be able to expose some areas in the pass game is something that we have to do."

Defensively, the strategy will be the same: to stop the run game against a Marshall team that broke out for 380 yards on the ground and four touchdowns and threw for 200 plus yards and two touchdowns in week one versus Norfolk State.

"We have to be better, you know, when a team says, Hey, we're gonna run the ball and try to run the clock out, and, and we got to be able to step up and get a stop."

On the road in Columbus, Ohio, the Irish gave up 172 rushing yards and three touchdowns to the Buckeyes but they hope to change things around on their turf

"I'm excited, really, you know, for my first home game as a head coach here at Notre Dame Stadium, and it's something you dream about. And ever since you have been named head coach, I'm looking forward to this moment."