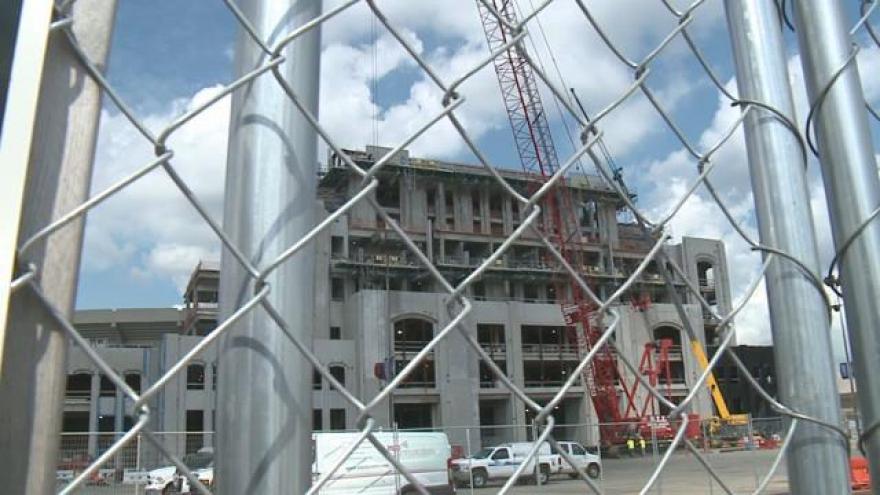 Notre Dame Stadium has changed quite a bit since the first bricks were laid in 1930 and that change is not complete yet. The $400 million Campus Crossroads project is the largest building project in the university's history.

More than 750 workers have been on site since 2014 taking what used to be a place for just football and turning it into 750,000 square feet of teaching, research and performance space.

"We have this gigantic building in a very populated part of campus that only gets used 10 or 12 times a year and so let's make better use of that. So we came up with a plan to put three buildings attached to the side of Notre Dame Stadium," said Dennis Brown, university spokesman. "So it really isn't a football stadium renovation or expansion, it's an opportunity to use the stadium in a more effective and efficient way."

When the project is finished in the fall of 2017, the three additional buildings will be used for science and engineering, psychology and anthropology, music and even a student center complete with on campus dining.

But don't worry football fans, this project will enhance the game day experience as well.

Beginning this season there will be all new LED lighting, new premium club seats and in the upper level 20,000 bottoms will be much more comfortable.

"The big headline on the stadium I think is, no more splinters, at least in the upper bowl. They've been replaced with vinyl seating up there," Brown said.

By next season even more changes occur inside the stadium with a new tunnel going in on the northwest side for the visiting team.

The marching band will also move off of the field and into the stands and the lower bowl seats will be replaced and given an extra two inches of room.

But that extra comfort comes at a price.

"Next year the stadium capacity will actually be reduced, a lot of people have thought this is a stadium expansion but this is actually the opposite in some ways. But we're also going to be losing some seats because of the expansion of the seat size in the lower bowl from 16 to 18 inches, so we'll lose about 1 seats per row," Brown said. "So it will be less than 80,000. Not a dramatic change but a little bit less."

Possibly the most controversial aspect of the renovation will be in the south end zone - where there will be a video board.

"You can see where the board is going to be. It will be 96 feet across and 54 feet wide. It will be HD to the max, the most advanced technology available at the time so we have a lot of potential and we promise not to use it for commercial purposes in any way," said Brown. "Notre Dame leaves millions of dollars on the table every year. We have no commercial signage in the stadium which is very unusual and it may be unique to college football. And, we don't have luxury boxes either. We could have, it would bring in millions of dollars in revenue but we feel like we've been able to maintain a collegiate atmosphere with the way we've kept it pretty simple, from the diagonal lines in the end zone to the lack of signage in the stadium. Whether that will continue forever is hard to say but for the time being we've been able to stick with that."