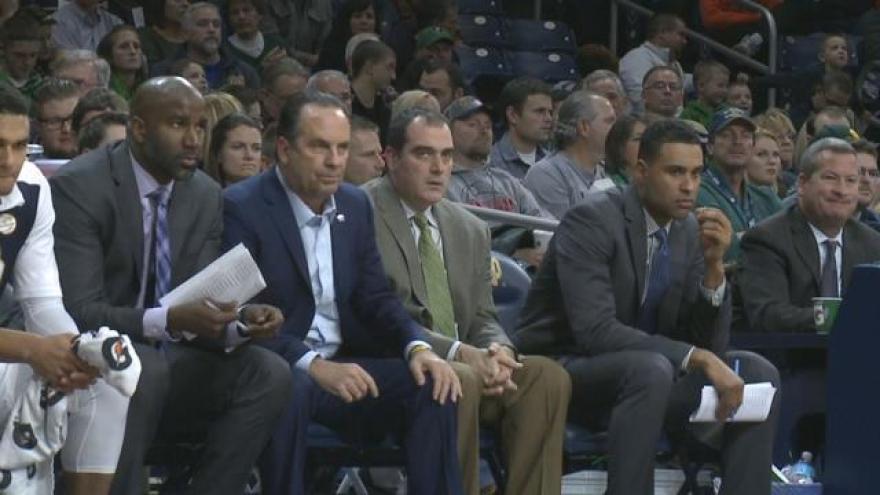 "I had a great four years here, the best decision I ever made in my life," Ryan Ayers said.

"He said Hump, I want you to come home, and the rest was history," Ryan Humphrey said.

Both Ryan Ayers and Ryan Humphrey joined Brey's staff this offseason; both also played under Brey at Notre Dame. Joining former Notre Dame grads Harold Swanigan (director of basketball operations), and Ryan Atkins (video coordinator), Brey's staff consists primarily off past players. Only Rod Balanis, who has been with him since beginning here in South Bend. But it's the unique connection Brey has with his former players that makes his coaching recipe so successful.

"And for us to be able to say, I've lived  it, I've sat at your seats on the bench, this is how you communicate with coach, if you want to get a point across, try this," Humphrey said.

Going form play makers to teachers, Humphrey and Ayers understand their purpose now that they've transitioned to the bench.

"Because it definitely can be difficult sometimes because you've played for this program, you have a lot of passion for it, so bringing that emotion down and thinking clear headedly," Ayers said.

Learning their success comes from the current players success and they say there's no better feeling.

"Either we do it in practice or have success in a game, they'll automatically look at me and give me a little wink, give me a little point and it just feels good to say all the hard work we do behind the scenes, that they're putting in to action," Humphrey said.

And it all leads back to their leader, Mike Brey, who gave them their shot; on the court and now on the bench.

"What he's done and what he's built, I don't think that he gets enough credit., and to have us come back and say you know what, I'm going to bring my guys back to enjoy the success we've had."