A bond stretching beyond the basketball court 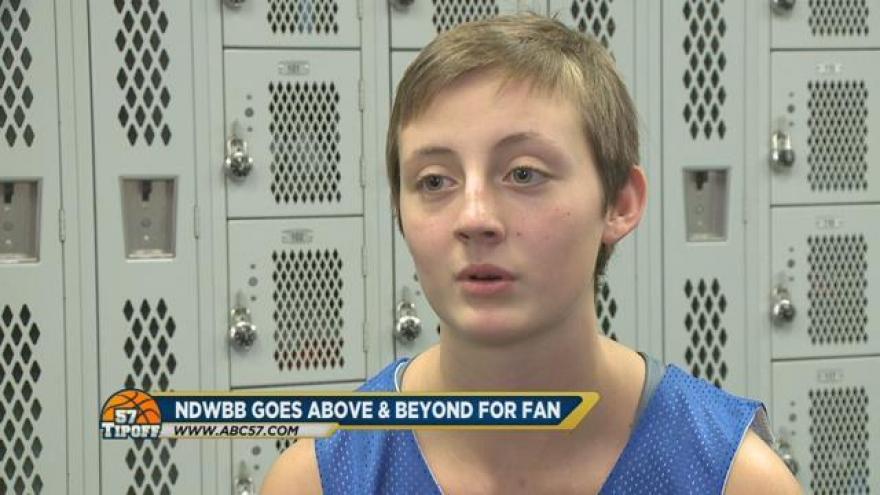 When Alana Cook takes the court, she's striving to be like her hometown idol, Ali Patberg, a Notre Dame guard.

"She never gives up and just a real good person," Alana Cook said.

"We basically share everything to each other, we're best friends. We're there for each other whenever she needs lifted up or I need lifting up," Alana said.

A phrase that hit home just 15 months ago. In October of 2015, Alana was hit in the back of the head with a dodge ball. For two weeks, her condition continued to get worse and worse.

"It got to the point where my dad was totally over it so he took me to the emergency room and demanded a head CT to see what was going on and that's when they found the tumor," Alana said.

A high grade papillary tumor or a rare form of brain cancer, and at that moment, Alana was in a fight for her life and envisioned the worst.

"Death. Like dying because I know many people who have had cancer that have died," Alana said.

"It was the worst thing you can imagine. The worst." Holly Cook, Alana's Mom, said.

Alana was immediately rushed into surgery to relieve the pressure on her brain.

"Working in the ER all those years, I'm kind of a worst case scenario, I thought I was going to lose her. It renders you helpless. It does," Holly said.

While all of this was going on, Ali tore her ACL just before the season, forcing her to miss her entire freshman season, but her mind quickly shifted back to Alana.

"Her challenge is much bigger than mine, you know like you said, put it in perspective. My family always tells me you know it's just your knee, you have your health," Ali said.

Fast forward to July of 2016, after going through multiple rounds  of chemotherapy and radiation, doctors declared Alana cancer free.

"I didn't believe it," Alana said.

And it only got better. This past October, Ali invited Alana to watch the Irish's first official practice, but what Alana didn't know was that was just the beginning.

"It was hard for me to hold in the secret," Ali said.

After practice, Ali took Alana on a tour of Notre Dame's locker room, and waiting was the entire team.

The team gave Alana an honorary letter of intent allowing her to attend home games and any other team functions as long as it works out with her schedule. A moment that will last a lifetime between two friends, connected by the game, they both love.

"Having someone that I look up to with me, knowing they're right beside me 24/7 with me. It just makes me feel like nothing ever happened before," Alana said.