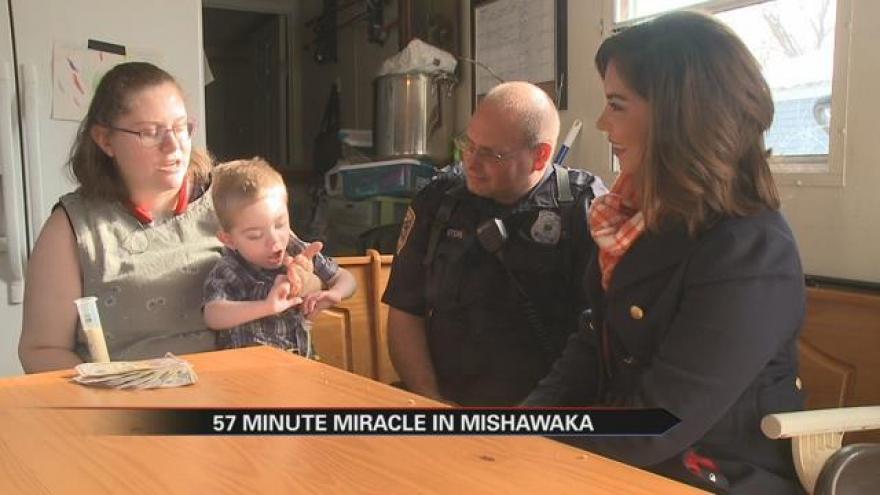 First class Patrolman Jason Stone has been on South Bend's police force for over 15 years.

Though it can be a thankless job, Stone says it's the people that keep him going.

Always working to give back, Officer Stone seemed like the perfect person to help us make our next miracle happen. He was handed $570 to help make one Mishawaka family's holiday.

“I do know a couple that has three children. They live in Mishawaka. Allen is a hard working guy. He works 10-12 hours a day. They have a child that's two that is handicapped. I know he takes his child to Riley's Hospital and he had to do that last Friday and I know he’s really strapped for cash. And I think that they would be deserving of this because I think in the back in their minds they're probably wondering how they're going to do Thanksgiving or Christmas with their kids.”

Within the 57 minute time frame, our crews joined Officer Stone at the front steps of the family’s home to offer the 57 Minute Miracle surprise.

“Very unexpected! That's not what I thought at all when I saw a police officer,” said Sherry.

“I know your situation with Wyatt and he's a good little boy and I admire you guys. I admire you for having to be home with him all the time,” said Stone.

Sherry invited the cameras and crew into her home to share more about her situation this holiday season.

“Wyatt was born early. He is a twin. So we have two 2-year-olds and one 5-year-old so we're kind of busy. He ended up getting an infection that affected his brain shortly after birth. And he spent three months in the NICU, has had 12 surgeries, additional month or two in the NICU. We're at therapy twice a week at the hospital and twice a week through First Steps. He's surpassed what they ever thought that he would do,” said Sherry.

Now this struggling mom has a chance to make ends meet thanks to her miracle.

“I know that the holidays are coming up and I know that I'm scrapped for cash, so I imagine they are. And with only one person working and her full time with him, I imagine it would probably be tough for them. I think they're well-deserving of this,” said Stone.