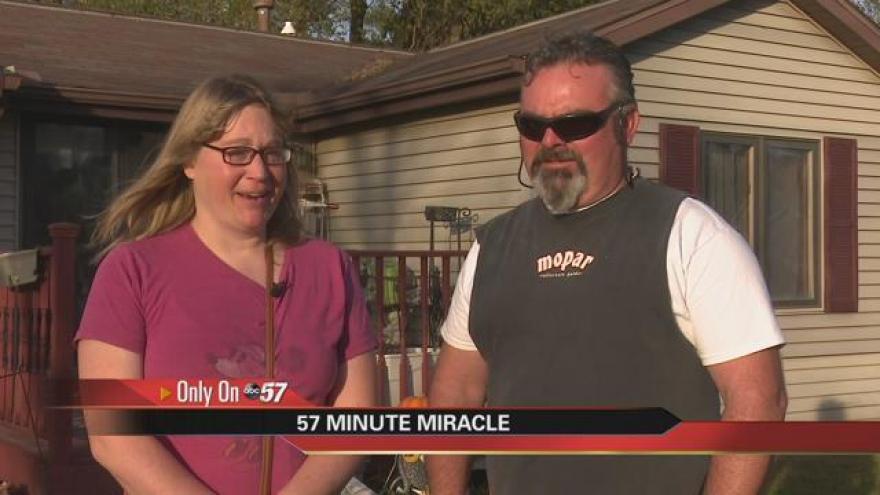 Sunday, ABC 57 News kicked off our three days of 57 Minute Miracles. The mission is simple; find someone who knows someone else who needs a miracle. We then have just 57 minutes to get that deserving person $570.

Monday, we took to Knox for miracle number two.

Our Knox miracle maker is firefighter Steve Barndt. When his chief called him, he had no idea he was going to have the chance to make a miracle happen.
We ask him if he knows anyone who could use a miracle. He had to think hard, but he named his neighbor, Andrea Brown.

We set the timer and took off for the library where Andrea works.

We followed Barndt in his fire truck to library where Andrea works, but she wasn’t there. So we took a trip to her house; not there either.

Barndt gives Andrea a call, “Andrea? Hello? Hey, this is Steve Barndt. Are you home? Are you nearby?  How close are you to Knox? Okay, well I need you to come here to your house if you could. Well, I’ve got a little surprise for you.”

Andrea was about 45 minutes away in Valparaiso but she rushes home for a surprise she won’t want to miss.

When she arrived, we told her firefighter and neighbor Steve Barndt thought she deserved this miracle.

“Thank you. Thank you very much,” said Andrea.

Randy was Andrea’s husband. He worked for the sheriff’s department until he died from stage-four melanoma in January of this year.

And the medical bills have made it even worse, “The toughest part is getting insurance. Getting everything set back up.”

Andrea finally has something to celebrate this holiday season. She was so thankful to have some extra money to put in her daughter's college fund.