A member of the South Bend Common Council is asking for Indiana's Public Access Counselor to weigh-in on the controversy at the City Clerk's Office.

City Attorney Bob Palmer tells ABC57 the notice that was sent to the public did not list start times of each individual committee meeting and a physical copy was not posted at council offices or chambers 48 hours in advance.

Wednesday, Councilmember Karen White sent a press release calling for the Office of the Indiana Public Access Counselor, which provides advice and assistance on the state's public access laws, to meet with parties involved to clarify roles, responsibilities, and expectations to meet state law.

"A PAC representative can finally answer questions about the proper government process that follows the State of Indiana Code," White said in a statement. "This meeting is vital, so that we do the business for the citizens our City. It is what we were elected to do."

Jones has claimed she posted notice and speculated that some councilmembers are trying to avoid voting on a resolution to provide reparations to minority communities. That resolution was removed from the Council's January 9th meeting because of filing errors.

"I'm not here to fight the council. I'm here to do my job, which is to do the administration for the council," Jones said this week.

Wednesday night, Indiana Public Access Counselor Luke Britt told ABC57 in an email, "I’ve had conversations today and last evening about coordinating a training, but nothing concrete. I’ve requested an official joint invitation from several parties as a condition to do so."

Jones has disputed the city attorney's claims, saying a physical notice was posted in the clerk's office. While the copy of the January 23 meeting notice Jones provided ABC57 does include the start time of the first committee meeting, it does not include times for the start of each individual committee. You can view the notice HERE: 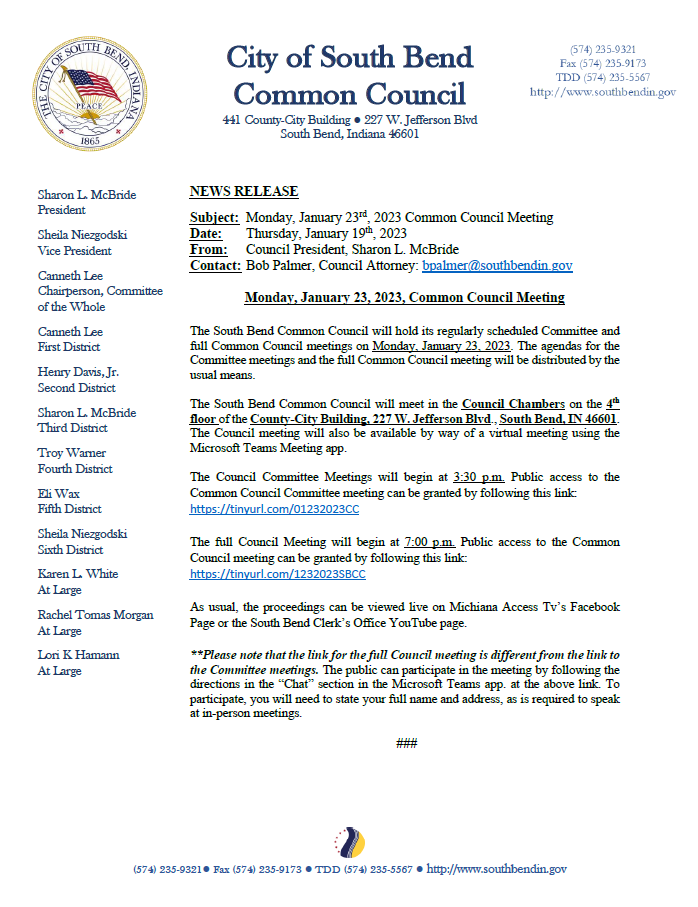