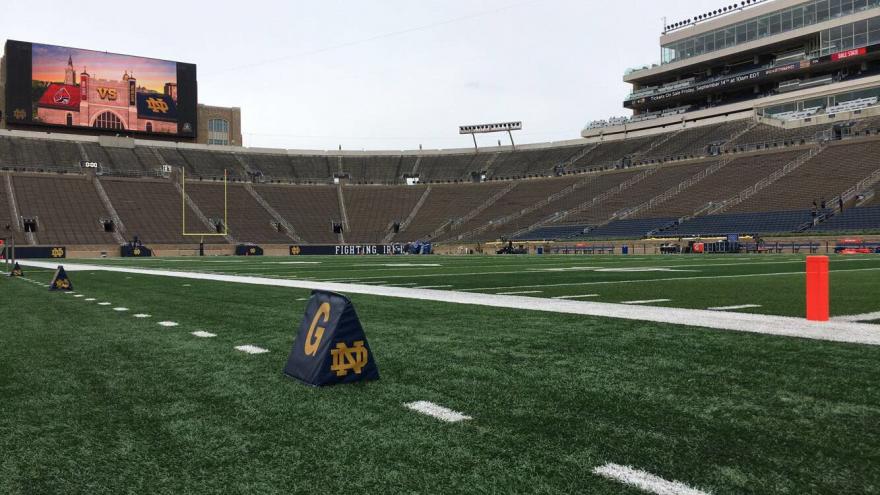 Notre Dame was quick to make moves, putting points on the board just minutes into the first quarter.

After just 5 plays on offense, wide receiver and running back, Jafar Armstrong for Notre Dame put the ball in the end zone.

Going back to the Citrus Bowl game-winner, Ian Book’s last four snaps have resulted in TDs. The latest a short TD run by Jafar Armstrong to put #NotreDame up 7-0 on Ball State early.

Ball State made their first points with the help of punter Morgan Hagee & crew. His fieldgoal attempt was good and Ball State lowers Notre Dame's lead.

A pass from Ball State's quarterback, Riley Neal proves unlucky for the Cardinals.

The pass was tipped by Notre Dame's safety, Jalen Elliott, and picked up by the Irish.

The Irish snag their second touchdown of the game with the help of running back Tony Jones Jr.

Notre Dame picked up another 7 points making the score 14 - 3.

The kick was good and Ball State doubled their score from 3 to 6.

Notre Dame's Elliott came away with his second interception of the game after a pass by Ball State's QB, Neal.

Jones Jr. went up the center and into the endzone for an Irish touch down.

The Irish attempted a 46-yard field goal on 4th down.

The kick was good and Notre Dame leads 24-6.

Ball State proved they were still in the game with a passing touchdown from Neal to Nolan Givan.

Hagee's kick is good and the Cardinals move up to 13 points.

Ray Wilborn got an interception, and Ball State gets the ball back.

Wimbush throws his 3rd INT of the afternoon, and some light boos begin.

Ball State Ball at their 31. #NotreDame

4th and 11 for Ball State and Hagee got another chance to kick, but it was no good.

Hagee's next 49-yard field goal attempt was good and Ball State moves up to 16 points.

Contributions to this story also made by: Allison Hayes
Share this article: