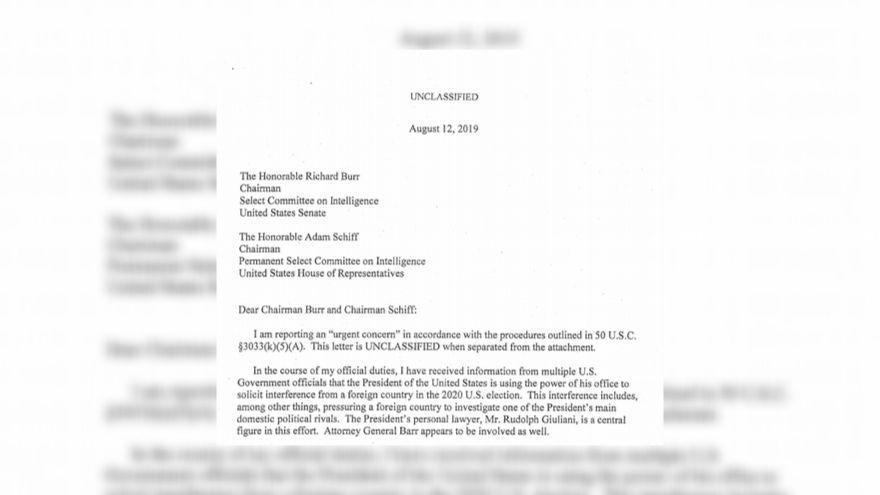 The complaint is at the center of the Democrats' impeachment probe of the president and its release follows the Wednesday issuance of a rough transcript of a July 25 phone call between Trump and Ukrainian President Volodymyr Zelenskiy.

A classified version was given to some members of House and Senate intelligence committees on Wednesday ahead of the public release.

Acting Director of National Intelligence Joseph Maguire is expected to speak publicly for the first time about the complaint on Thursday.

Read the letter regarding the complaint from the Intelligence Community Inspector General here.

“The Committee this morning will be releasing the declassified whistleblower complaint that it received late last night from the ODNI. It is a travesty that it was held up this long.

“This complaint should never have been withheld from Congress. It exposed serious wrongdoing, and was found both urgent and credible by the Inspector General.

“This complaint is a road-map for our investigation, and provides significant information for the Committee to follow up on with other witnesses and documents. And it is corroborated by the call record released yesterday.

“I want to thank the whistleblower for having the courage to come forward, despite the reprisals they have already faced from the president and his acolytes. We will do everything in our power to protect this whistleblower, and every whistleblower, who comes forward.

“The public has a right to see the complaint and what it reveals.”

"Nothing has changed with the release of this complaint, which is nothing more than a collection of third-hand accounts of events and cobbled-together press clippings—all of which shows nothing improper.  The President took the extraordinary and transparent steps of releasing the full, un-redacted, and declassified transcript of his call with President Zelenskyy, which forms the heart of the complaint, as well as the complaint itself.  That is because he has nothing to hide. The White House will continue to push back on the hysteria and false narratives being peddled by Democrats and many in the main stream media, and President Trump will continue to work hard on behalf of the American people as he always does.”