Brood X cicadas to emerge this month after 17 year hiatus

By now, you've probably heard the buzz about the 17-year cicadas. Okay, not the literal buzz from the cicadas yet, but at least you've seen the hype on social media.

The "hype" is true - a species of 17-year cicadas, known as Brood X, will be emerging later this month. True to their name, we only see them above the ground once every 17 years.

They arrive in high numbers, and this is in addition to the cicada species we see every summer. You'll certainly see them, and hear the males singing to each other as temperatures warm. Weather plays an important role in their emergence.

For 17 years, the cicadas are burrowed about a foot deep in the ground underneath trees. It's possible that anytime in those 17 years, if you're digging in your backyard, you might find some of them.

When soil temperatures warm to about 65 degrees, it is warm enough for them to emerge.

In the past, the cicadas have emerged after a light rain. This loosens the soil, and makes it easier for the bugs to crawl out of the dirt.

Michiana sits on the border between two different broods - this year's Brood X, and 2024's Brood XIII. This map shows where the broods will emerge. Don't worry about Brood XIII for now: we'll see them in 2024. 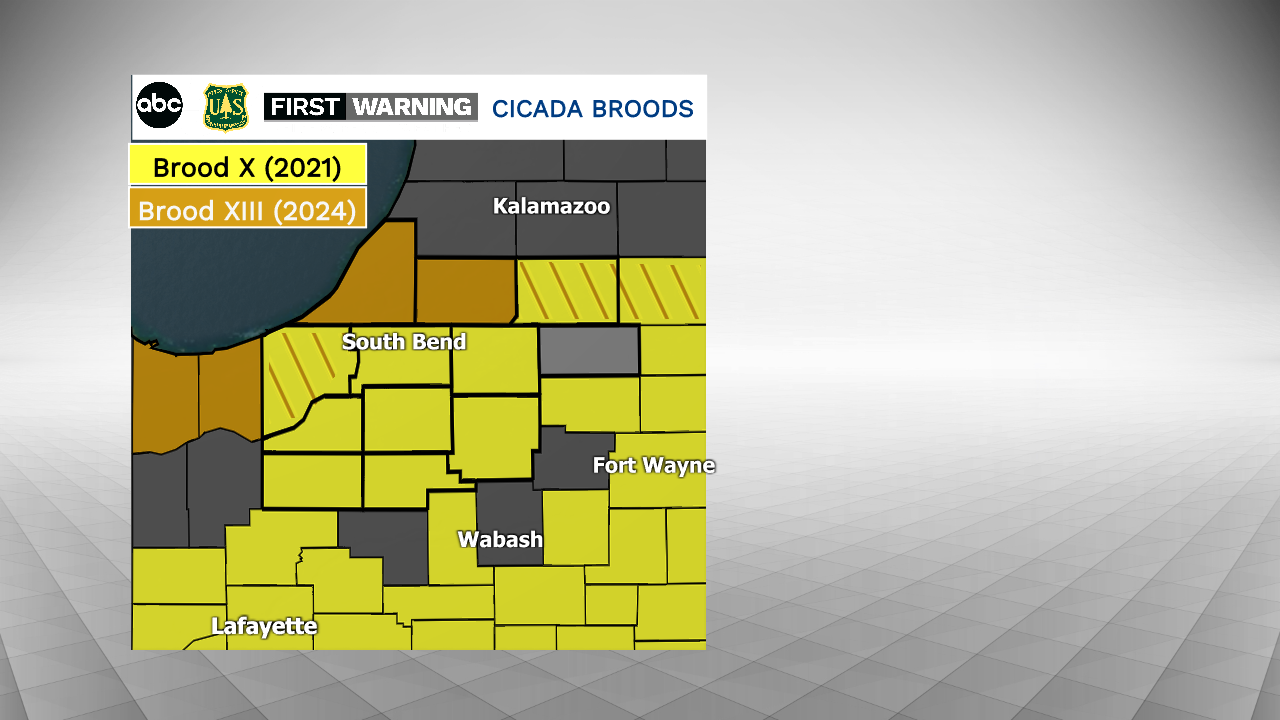 In Michiana, our cicadas might not be as numerous as in central or southern Indiana, due to our harsher winters.

That being said, we're still expecting a high number of Brood X cicadas.

"Right now, they're estimating that upwards of 1.5 million per acre might show up in certain areas," says State Entomologist Megan Abraham with Indiana DNR. "That's a lot of cicadas."

A lot of cicadas all at the same time may look scary, but it's biology's way to ensure their species lives on for the next 17 years.

"If you have quite a lot of insects out at a certain time, then the predators can't eat them all before they're able to mate and reproduce and start the cycle all over again," explains Abraham. "It may seem like a plague is upon us, but that is not what's happening."

They'll be turning out in numbers, but they don't want to hurt people. You'll just notice them everywhere, especially near trees.

Trees are vital for the success of the species. After emerging, cicadas are only alive for six weeks and have to lay their eggs on trees.

When eggs hatch, the new cicadas drop below the trees, crawl into the dirt, and hangout underground for the next 17 years. They burrow down about a foot, and chew on tree roots for food. As long as there are no disturbances to the tree, we'll see them again in 2038.

If you live in a neighborhood that's recently been developed, or only has trees younger than 17 years old, you likely won't see any cicadas in your yard.

Cicadas and their eggs don't really pose a threat to trees, unless the trees are younger than five years old. The process of laying eggs causes tree flagging, or causing tree branches to turn brown.

If you do have trees younger than five years old, Abraham explains that you can protect them by covering them with a net for the six weeks cicadas are alive.

Even though flowers or a garden might seem like a yummier option for feeding, mother cicadas choose trees for their longevity.

"Those cicadas have to drop to the ground underneath that tree and then feed on it for 17 years. She's interested in laying eggs on something that's going to be around a lot longer than your average annual or perennial," she says.

Your garden and flowers will stay safe. You won't need to take any other precautions with these bugs, just the young trees.

If you're tempted to use pesticide because you just don't like all the cicadas, unfortunately that won't really do much, so the DNR is encouraging people not to use them.

Is there anything good to come from their emergence? The answer is yes; we'll see the impact of these bugs down the entire food chain.

"They are nutrient rich," Abraham informed. "When this last brood came out, there was an increase in the number of game birds, the number of small mammals in the areas in the following years, because they'll have a very rich diet this summer."

Mammal and birds won't be the only one snacking on cicadas.

"People do eat them, honestly," Abraham admitted. "They liken it to a shrimp, or a crustacean. The one note on that is if you have an allergy to shellfish, you should not eat a cicada either, because they're close enough related that you might also have an allergy to a cicada."

If all this information is leaving you feeling a little bugged out, just remember: they're here for less than two months total.

"Appreciate it while it's here," encouraged Abraham. "It's a phenomenon you won't see again for another twenty years, well, seventeen."