Beyond the Scare: Niles Scream Park

Beyond the Scare: Niles Scream Park

Spooky season doesn’t have to run just through October.

Whether you are picking pumpkins or indulging in fall treats, getting scared is on everyone's radar!

But did you know getting spooked at the Niles Scream Park provides more treats then tricks?

The Niles Scream Park has stood the test of time.

“The Scream Park has been around this is 49 years for them next year is 50," says Cass County Fair and Niles Scream Park volunteer, Karen Wright.

For 20 nights, with 7 main attractions and accolades like 2021's number one "Top Haunt in the US," according to Coaster Nation, it's not just screams fueling the non-profit.

"Since records were taken, which I believe is over the last 16 years, is over $2.2 million," says Smith.

“Since records were taken, which I believe is over the last 16 years, is over $2.2 million," says Smith.

Millions of dollars earned to go back to local non-profits.

“There are over 50 to 65 Not for profit groups that are working out here. And their hours that are donated to the project, either the offseason or when we're open," says Smith. "Basically, go towards the end and based on the success of the year determines their hourly rate. And then we will cut a check to that organization."

The more volunteer hours equals the more money that goes back to the non-profits.

Organizations like Haunters for Hope with the American Cancer Society, the Make a Wish Foundation, The Cass County Fair, and the top earner for several years in a row, Boy Scout Troop #541.

Over the last three years the troop has earned over $70,000 making dreams a reality for many scouts.

“We've done several Eagle projects in the Buchanan area, from putting up wild bird houses to trails on the McCoy Creek," says Blumka.

Since 2017, the Cass County Fair volunteers at The Niles Scream Park have been raising money almost $10,000 to help go back to fix the worn goat pens.

An expensive project now funded partly by the park, brought in brand new metal pens for the goats and 4-H kids to use in an easier and safer way.

Wright volunteers for the Cass County Fair Association and started back at the Scream Park almost 30 years ago as a parent trying to send her daughters to ballet competitions.

“We got a group of parents together to raise money for their dance project, they would travel for competitions, you know, across the country would go to Florida and Chicago, several other places around the country," says Wright.

Once Wright's daughters grew up, her own love for the Scream Park and it's mission keeps her coming back.

“I could decide to just sit at home but I feel like my time is better spent trying to better where I'm from and make the world a nicer place for people to go in enjoy whether it's at the fair or at the screen park or whatever else I can find to do," says Wright.

Making change to be the change.

“Our business model is always about change. Even in the offseason, we have people that are working out here, volunteers included, that are helping facilitate that change in so that way, our patrons that come back to make an impact to the community," says Smith.

Spooky season always seems to bring out the best scarers and leaders of tomorrow.

“There's a lot of thoughts and feelings for this place. Our group is really involved here but it truly is watching these youths was grow up," says Blumka.

If you would like to stop by the Niles Scream Park there are two more weekends to head out for the 2022 season.

The park is located off of Mayflower Road in Berrien County, Michigan.

Head to the Niles Scream Park's website for park times and ticket prices. 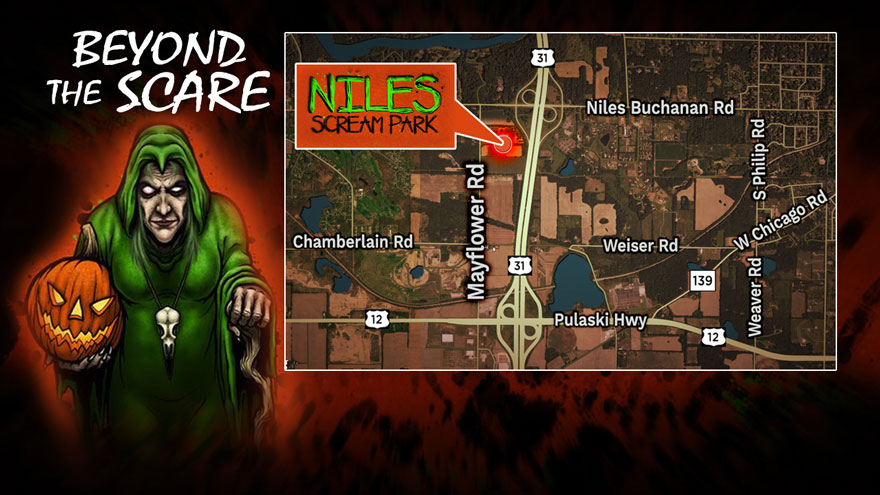