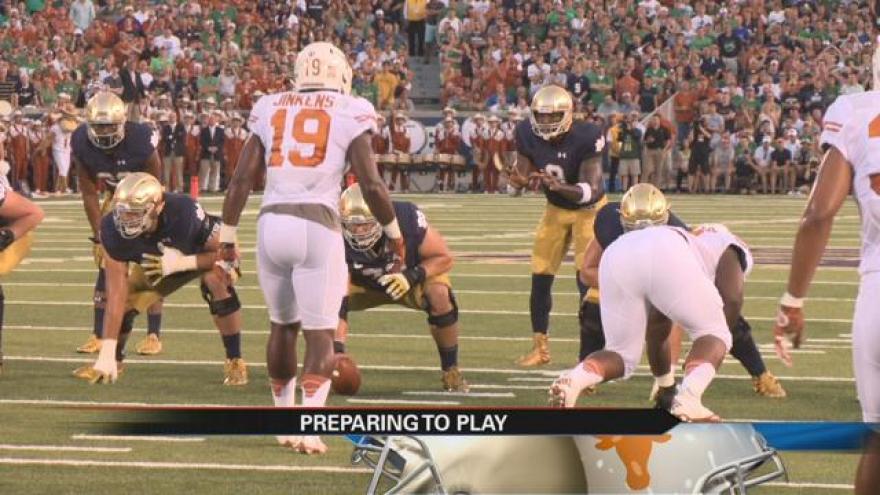 Adversity is a big part of Notre Dame's season already.

Add that pressure along with over a 100,000 other reasons to be shaken up and these players have quite the tall task ahead.

So how do they overcome it?

They're feeling confident and anxious to get this season started.

Now the setting for their first game is a little different than normal.

A new season brings new excitement and anticipation for that first game.

"It's why you play college football, it's why you come to Notre Dame, you're going down to the University of Texas of all places to play your first game under the lights in front of a hundred and whatever thousand fans. There's nothing like that, there's no drug or drink that I can take that gives me that kind of feeling,” said Mike McGlinchey.

Like he said with more than 100,000 fans expected to fill up Darrel K. Royal Memorial Stadium, the Irish have practiced with crowd noise the whole week  but even that can't compare what they're about to face.

With many new faces about to take their first college snaps, the moment is here, and the veterans preached, enjoy the moment, but remember it's just football.

"I think once you get past that initial snap or that initial running out of the stadium, whatever it may be, I mean football is football,” said Isaac Rochell.

"When the lights come on, the true players come out, and the true talent comes out and you know the coaches can't stand behind you all day, so we got to grow up a little bit. I'm excited to see how we unfold and play against Texas."

Zaire said it best, the guys who embrace this moment, and enjoy these kinds of situations, prosper the greatest. And with two guys in Zaire and Kizer as your signal callers, the Irish are in good hands.