The hunt is on! Rare, bright orange glow in the dark rocks dotting the Great Lakes 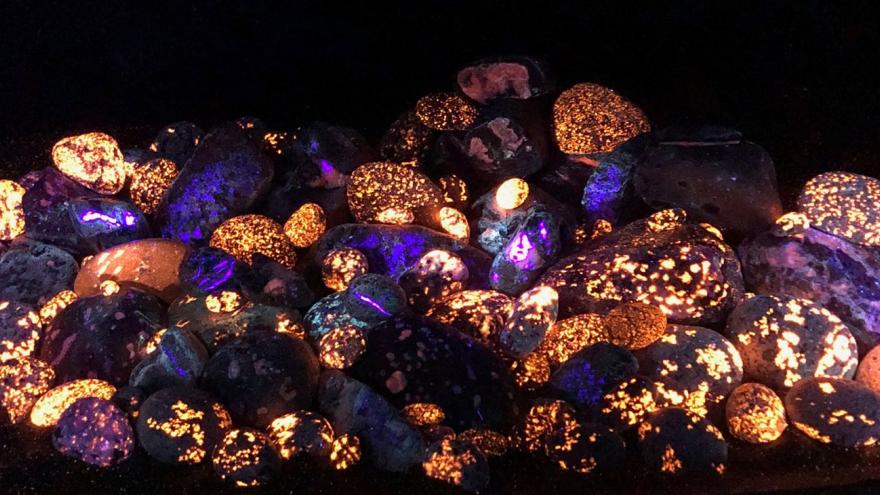 Rocks may not be something that piques your interest. And that's perfectly understandable. But there's one rock found right here in the Great Lakes that will change that.

Searching for rocks and minerals along the five Great Lakes is nothing new. People have been doing it for years and years. There are even groups on Facebook specifically for those avid hunters.

But in May of 2018, a new type of stone changed the rock and mineral hunting world in Michigan and surrounding states. 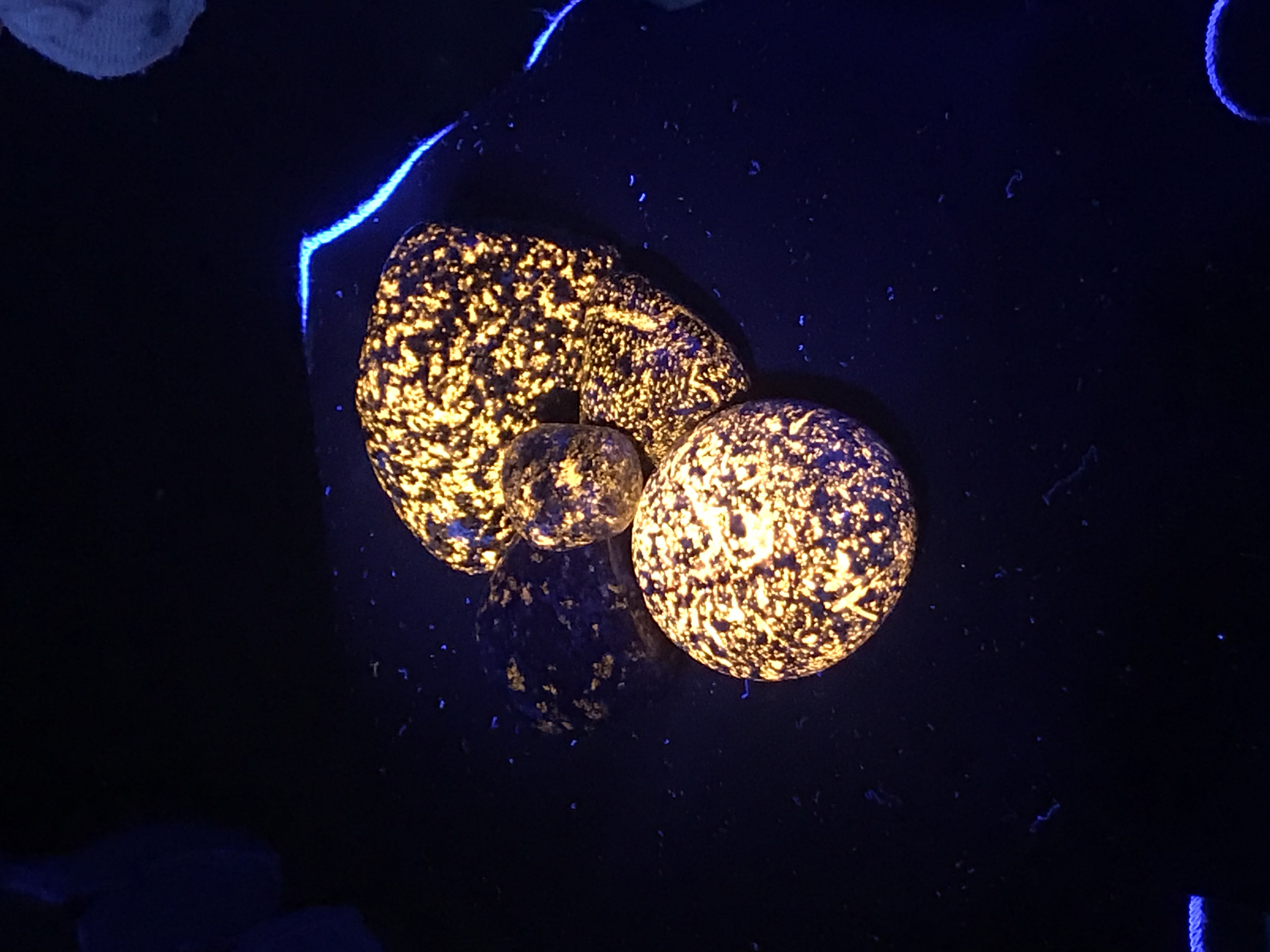 Vivid examples of syenite rich in fluorescent sodalite, or Yooperlites. John Dean
Erik Rintamaki has always been an avid agate picker up on Lake Superior. But they are becoming harder to find. To change things up, he decided to take a special UV flashlight with him on a nighttime hunt. He came up empty the first three times, but it's what he found on the fourth try that has people scouring Great Lakes beaches every evening.

"I found three little bright orange stones that all had three different patterns on them. [I] had no clue what I had found so I ran home and Googled fluorescent orange minerals in Michigan. Couldn't find anything about them. So I ended up sending them off to California to a geologist [and] he told me they're a syenite rich in sodalite."

Syenite rich in fluorescent sodalite. That's the scientific name for these incredible glowing stones. But Rintamaki, who is credited as the person to get them verified as a new mineral in Michigan, simply dubbed them "Yooperlites" because it's much easier to pronounce. 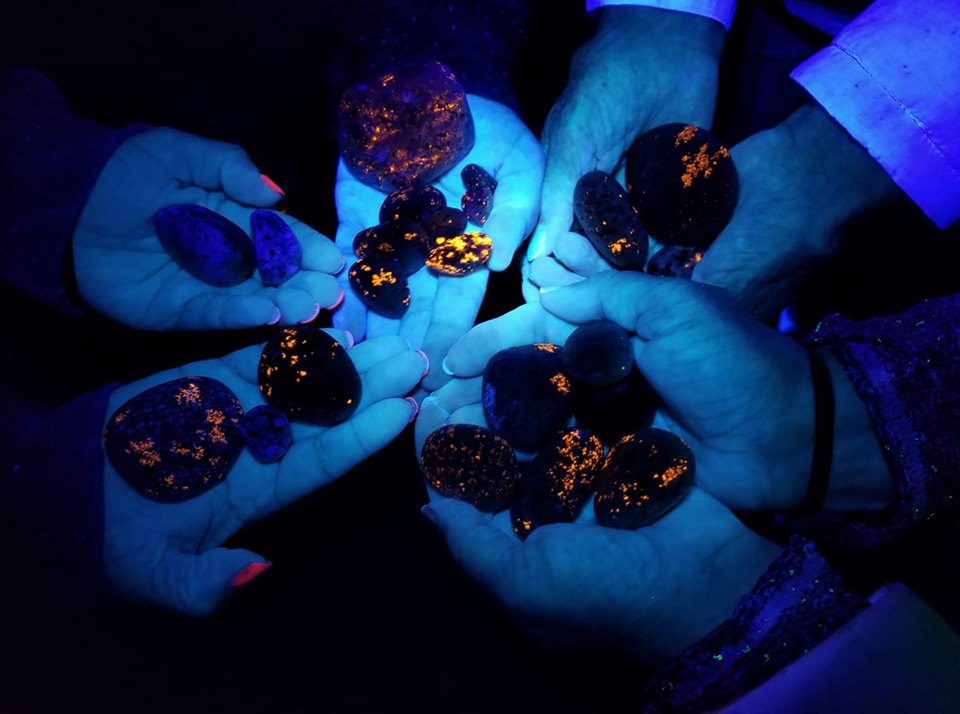 "Yooper" for where he found the stones (Michigan's Upper Peninsula); "lites" because of the orange glow the stones put off.

Despite the minerals just recently getting that name, they have actually been around for quite some time. In fact, geologists believe they were deposited in the Great Lakes region by glaciers.

The name may suggest that they're only found in the U.P., but that is far from the truth. "You have them in Michigan, Wisconsin, Minnesota, Illinois, Indiana, and Pennsylvania so far," says Rintamaki.

Yes, that does include us right here in northern Indiana and southwestern Michigan!

John Dean, an avid hunter of fluorescent sodalite hunter right here in Michiana, has found the glowing stones in both Berrien County and Van Buren County.

"The South Haven area is probably the best area. There's a little small beach that I don't talk about much that we go to. It's up in Stevensville." 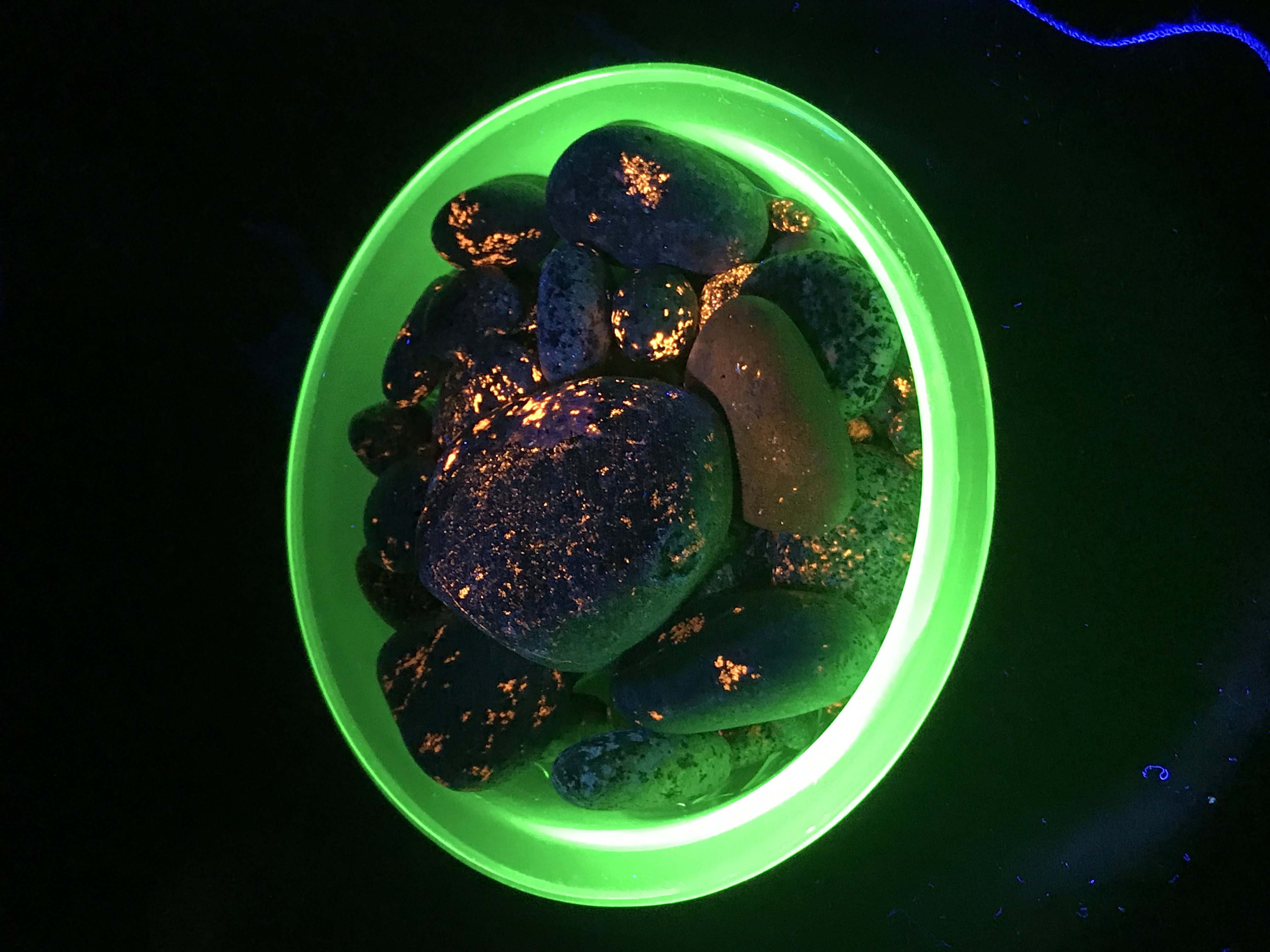 Fluorescent sodalite Fluorescent sodalite
While the number of stones you'll find on any given day is lower on beaches on the southern end of Lake Michigan compared to beaches up in the U.P., Dean has quite the reason for optimism if you want to go hunting yourself.

"I have yet to be skunked. I have always walked away with at least one stone. A good night down here in this part of Michigan, you're going to walk away with a dozen. That's a good night," he tells ABC 57 News.

It's not just Michigan either. Rintamaki says he has searched beaches near Chicago and Milwaukee, and found more than 40 "Yooperlites" in an hour's time.

And there are times to go hunting that are better than others. For example, both Rintamaki and Dean say the day after a good storm provides a great opportunity.

That means the days following strong northwest winds and large waves for this part of Michigan and Indiana. Fortunately, there will be an increasing number of those kinds of days as we head into September, October and November!

Dean says if you go out around sunset after a storm and give yourself two solid hours to hunt, you will be in for an experience you'll never forget. 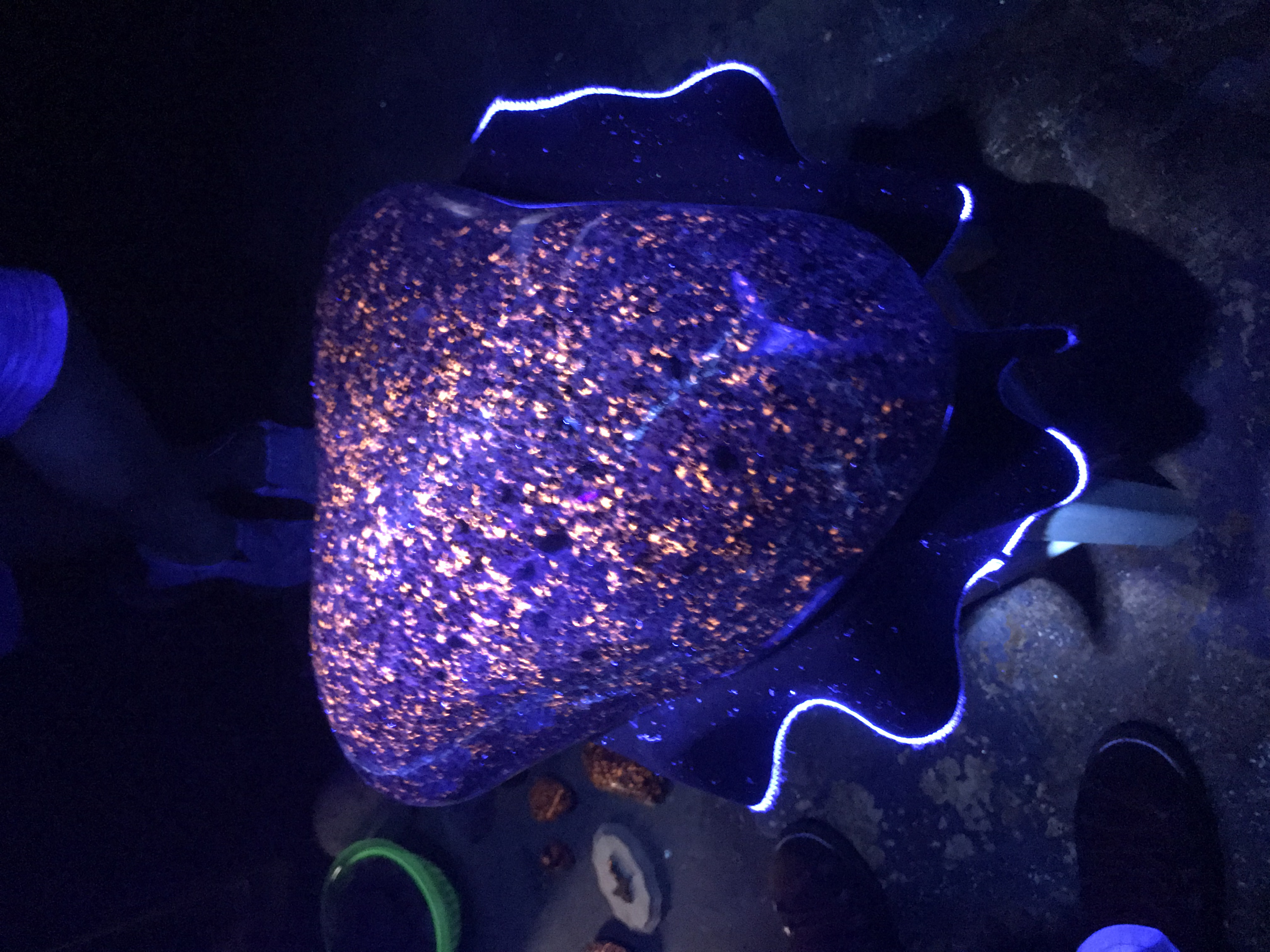 Large Large
Hunters also say it's important to take at least one other person with you, and pack plenty of patience because missing one of these stones is easier to do than you may think.

"Proper technique is going super, super, super slow. If you think you're going too slow, you gotta slow down even more. Just stand on a spot where there's stone. Stand in one spot. Scan up and down the beach as far as your light will reach all the way to your feet. Up and down, up and down. Do it three or four times back and forth, up and down. And then take a couple steps and do it all over again," Rintamaki says.

All right. So you find a friend, circle a day on the calendar and pick a beach to explore. All that’s left is to do is make sure you have the proper light. That would be a long wave UV light with a special filter, which can be found online. 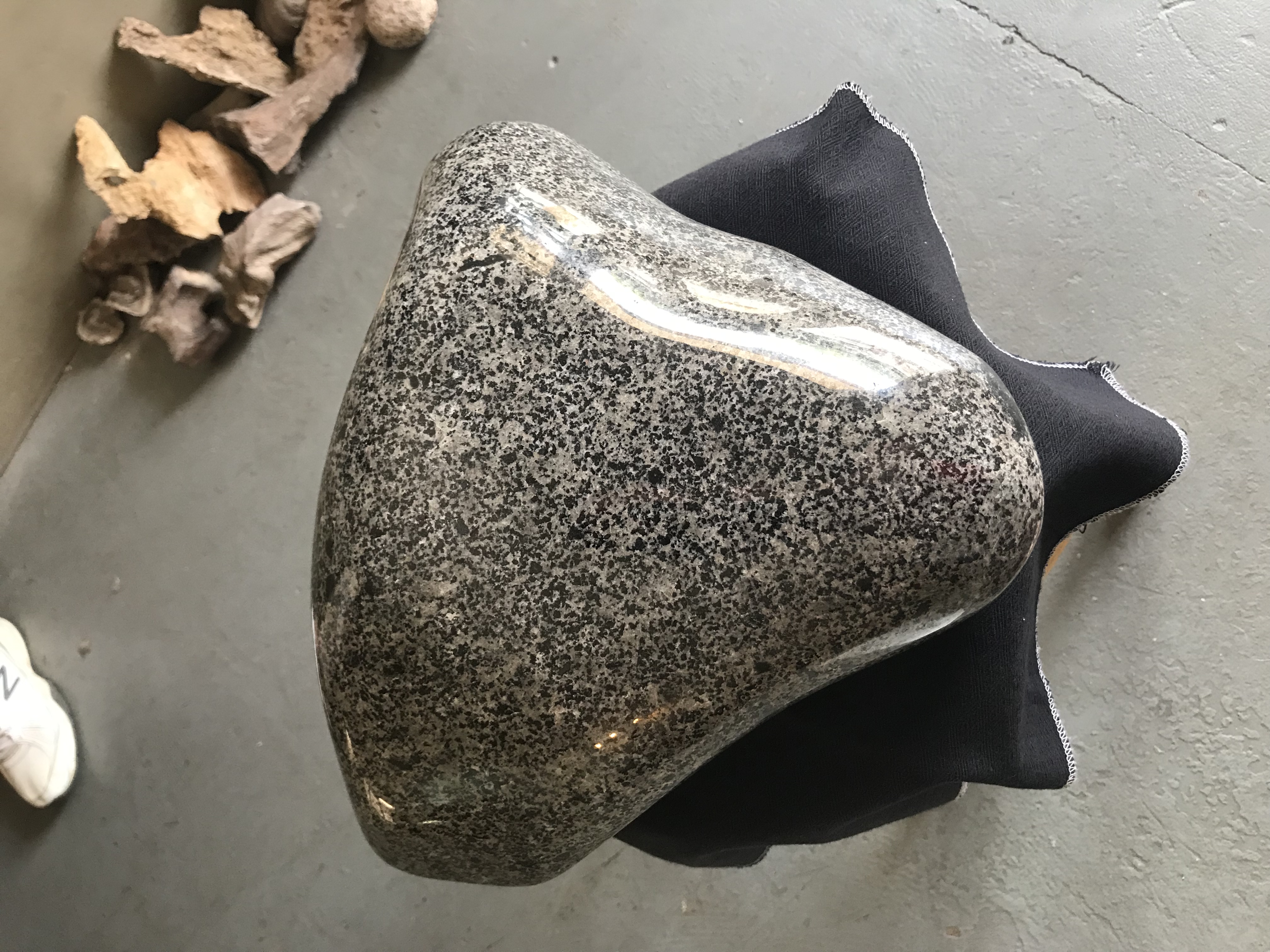 What the stone above looks like in the daylight without a special light. John Dean/Joshua Tree Earth & Space Museum
You can check out these two links for more information on both the stones and the special lights (the first is a Facebook group that you can freely join and ask questions if needed):

What's awesome is that once you attain your own special light -- which are well under $100 -- you’ll not only be able to find the bright orange  fluorescent sodalite, but other rocks that shine or glow!

"There's a lot of other things that fluoresce other than Yooperlites and sodalites. Like Petoskey stones are a dull yellow, there's a sandstone that's nice bright orange, there's limestone that's white, there's scheelite and fluorite that are blue and purple. There's all sorts of stuff that you can collect. It doesn't have to be just the Yooperlites," Rintamaki tells us. 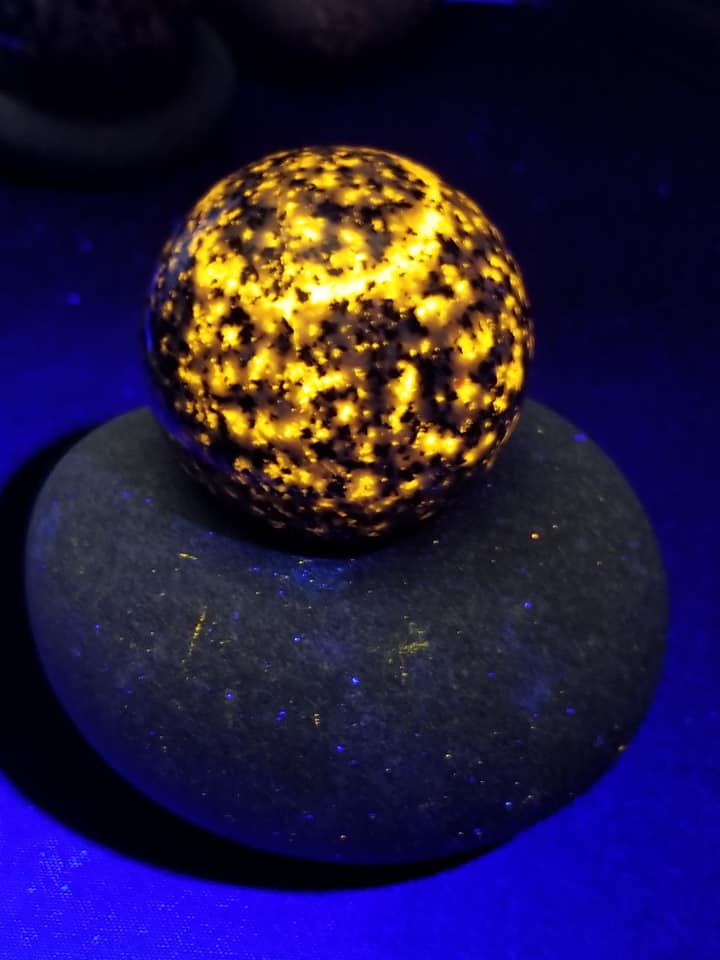 Premium Sphere
If you decide to searching for your own fluorescent sodalite, there are a trio of important tidbits to keep in mind.

Secondly, the state of Michigan only allows 25 pounds of fluorescent sodalite to be harvested per person each year regardless of where you find them in the state.

Lastly, the batteries that go in the UV lights are lithium ion. They can be dangerous if proper precautions are not taken.

If you follow these simple rules and plan a trip to a beach known to have rocks, you're going to get hooked. Our own Meteorologist Tyler Sebree already is!

RosewoodStudio 10 days ago
Piques your interest. Not peaks! You are journalists, so you should know this!
Like Reply Delete