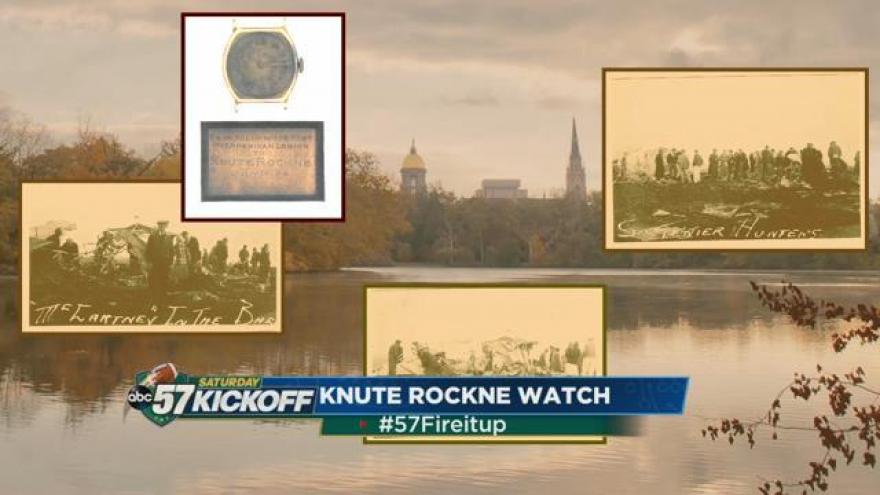 Even though Knute Rockne died back in the ‘30s, two Indiana men are keeping his memory alive with their collections.

“Football led by Rockne put Notre Dame on the map and made them a significant national university,” said one Rockne collector Andy Nickle.

“Rockne uh was sort of a symbol of an underdog. He didn’t’ come to Notre Dame on a scholarship. Knute Rockne started out in a post office in Chicago, so he’s a perfect example of an individual who works himself up,” said Michael Lopez, who owns some of the last items Rockne touched.

Up and into stardom.

When at the height of his career, tragedy struck.

“We’re talking about a man who moved so many people that upon his death, the president of the United States referred to his loss as a national loss. That’ll get your goosebumps going if you’re a Notre Dame fan,” said Lopez.

But Michael Lopez and Andy Nickle are more than fans. They’re collectors.

“Well Knute Rockne just is such an iconic figure, and being from South Bend, and having a degree from Notre Dame and following the football program and its history, you got to be attracted to Knute Rockne,” said Nickle.

And Andy bought many of his pieces in auction over the years.

These Rockne remembrances are significant, because of the impact the coach had on history.

“He only coached Notre Dame 13 years, and--he had put a stamp on the national scene that has never gone away,” said Nickle.

And these men  have some of the Rock’s most valuable stamps on history.

“Everything that was passed down was the rosary, the prayer book, the watch, and the eulogy cards,” said Lopez.

“I was able to obtain a series of telegrams that had been sent to Bonnie Rockne the day he flew on his last flight that he sent to her as he boarded the plane and telegrams to her after the crash about arrangements that needed to be made,” said Nickle.

“All of these artifacts were on him, at which time, Bonnie was given all of these artifacts. She gave the rosary and the prayer book back to my great great uncle Father Vincent Mooney who baptized him. And gave the watch to my great uncle Father Vincent Brennan. All of those things were then given to my great grandmother Iris Brennan, who gave them to my mother Sarah Brennan, and 28 years ago, on my 23rd birthday, I got the greatest present of my life, the Knute Rockne collection,” said Lopez.

From papers to parcels, Knute Rockne’s legacy will live on in these men’s collections.

“To have these individual items that really were so personal to the Rockne family-- I find it a way to just connect with history,” said Nickle.

He was known as a ‘builder of men’ and ‘the all-time winningest football coach in American history.’

And especially to collectors, Notre Dame will continue to be “the house that Rockne built,” said Lopez.

“Well Notre Dame certainly needs to remember him--Rockne really I think almost all historians will say, he really made the difference in Notre Dame in why isn’t Notre Dame just another Catholic school in the Midwest? It was largely because of Knute Rockne,” said Nickle.

“You’d have to start wearing rings on your fingers and your toes for that many, and it’s the race for number 12,” said Lopez.

Which is how Michael Lopez says this year’s team can pay tribute to the Notre Dame legend.

“Leave everything on that field. No regrets, and win one for the Rock,” said Lopez.