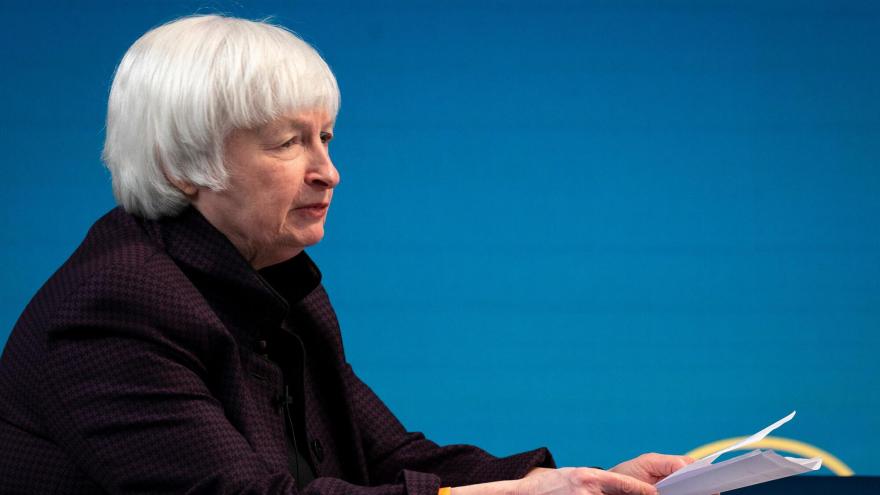 (CNN) -- Treasury Secretary Janet Yellen called for a global minimum corporate tax rate on Monday, a pitch that comes as the Biden administration begins to sell its roughly $2 trillion infrastructure and jobs proposal that would raise US corporate taxes to fund the massive plan.

"We're working with G20 nations to agree to a global minimum corporate tax rate that can stop the race to the bottom. Together, we can use global minimum tax to make sure that the global economy thrives, based on a more level playing field in the taxation of multinational corporations and spurs innovation, growth and prosperity," Yellen said in a speech to the Chicago Council on Global Affairs.

"Competitiveness is about more than how U.S.-headquartered companies fare against other companies in global merger and acquisition bids," she said during the remarks, which represented her first major address as Treasury secretary.

"It's about making sure that governments have stable tax systems that raise sufficient revenue to invest in essential public goods and respond to crises, and that all citizens fairly share the burden of financing government."

President Joe Biden's infrastructure proposal, called the American Jobs Plan, would increase the minimum tax on US corporations to 21% and calculate it on a country-by-country basis to deter companies from sheltering profits in international tax havens.

The plan would also raise the corporate income tax rate to 28%, up from 21%. The rate had been as high as 35% before former President Donald Trump and congressional Republicans cut taxes in 2017.

Yellen had previously called for a global minimum corporate tax rate, including during her confirmation process earlier this year, when she told a Senate panel that if confirmed, she would work "with our allies on a global tax regime that protects American competitiveness while ensuring corporations pay their fair share."