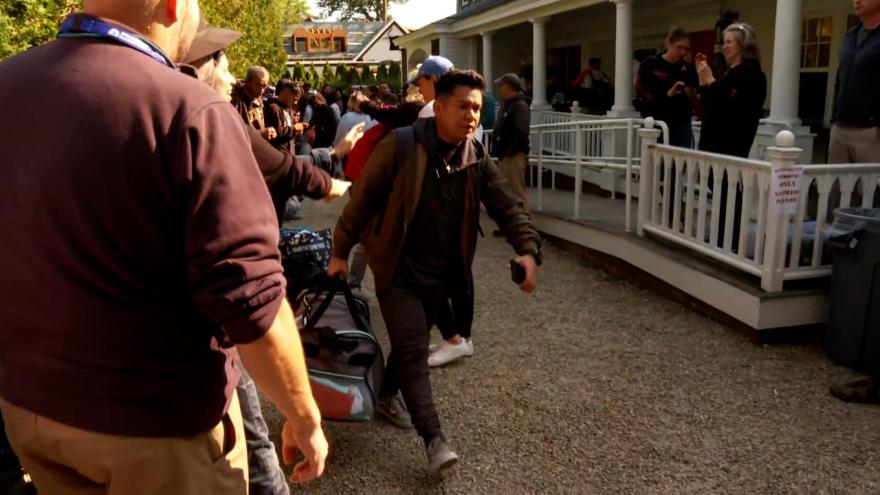 The migrants on Martha's Vineyard have boarded three busses provided by state and local government and are on toward their final destination at Joint Base Cape Cod to be provide continued shelter and humanitarian support.

(CNN) -- "Perla," the woman who allegedly helped arrange migrant flights from Texas to Martha's Vineyard in Massachusetts, has been identified by CNN as Perla Huerta, who served as a counterintelligence agent and combat medic specialist in the US Army until August.

About 50 migrants were flown last month from Texas to Martha's Vineyard in two planes organized by Florida's Republican governor as part of his criticism of the federal government's immigration and border security policies. Attorneys for the migrants have filed a class action lawsuit, saying they were misled in agreeing to the flights after being told they'd arrive to housing, jobs and help with the immigration process; no one on Martha's Vineyard knew they were coming, local officials have said.

A woman named "Perla" offered clothes, food and money to one migrant who had been living on the streets of San Antonio, Texas, in exchange for finding other people who would go on a flight to Massachusetts, the migrant told CNN. The recruiter was unaware of any deception and later felt betrayed by "Perla," he told CNN.

A friend of Huerta confirmed to CNN the woman in a photo provided to CNN by a migrant is Huerta. The New York Times reported other migrants have identified Huerta from pictures taken of her in San Antonio, according to Rachel Self, an attorney who represents the migrants.

Huerta served in the US Army for more than 20 years, US Army spokesperson Madison Bonzo confirmed to CNN.

The Sheriff's Office in Bexar County, Texas, which includes San Antonio, will open an investigation into the flights to see whether any laws were broken, the sheriff has said.

A migrant previously told CNN he had been living on the streets of San Antonio for nearly a month when he met a woman named "Perla" who offered him clothes, food and money in exchange for finding other migrants who'd take Massachusetts-bound flights, he told CNN.

She gave him $10 McDonald's gift cards to be given to those migrants who agreed to board the flights, and she told him to say they and their kids would be treated well upon arrival.

"I never, ever knew that (it) was a governor or politician," the recruiter said. "So, my only will has always been to help people."

The recruiter spoke to CNN in his first televised interview and was granted anonymity to protect his safety. He provided CNN with "Perla's" business card, text messages and audio messages to authenticate his story and to provide an inside account of how the migrant flights on September 14 came together.

The recruiter told CNN he agreed work with "Perla" to recruit the asylum-seekers once he realized they were being provided food and shelter at a hotel at a San Antonio where they would stay a few days before boarding the flights. Most of the asylum-seekers are known to be from Venezuela.

"My only intention was to help the people so they could get some stability," he said. "She took them to a hotel. At the hotel, I realized that they were being treated well," including being provided with meals, laundry and clothes.