With little time to get out, hundreds of Colorado residents lose their homes in a ferocious wildfire 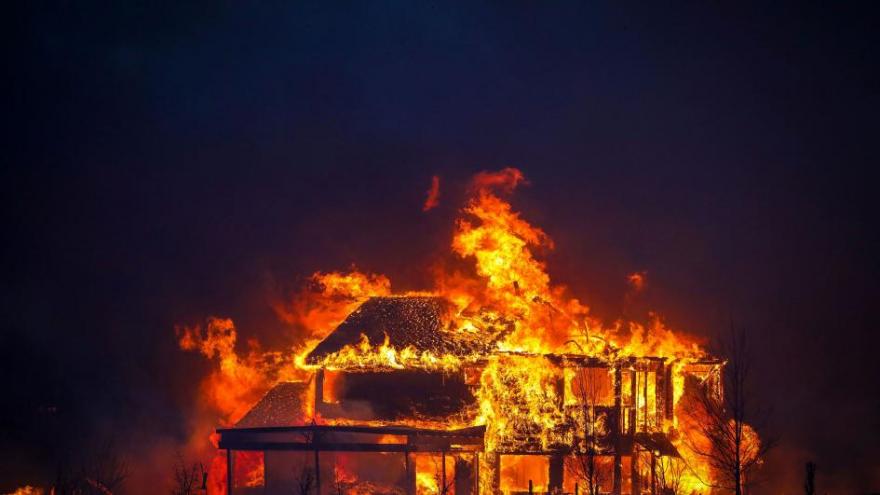 A home burns Thursday after flames swept through the Centennial Heights neighborhood of Louisville, Colorado.

(CNN) -- A vicious wildfire that began Thursday morning in Boulder County, Colorado, swallowed about 1,600 acres in a matter of hours, burning hundreds of homes and prompting orders for some 30,000 people in two communities to evacuate.

Amid historically powerful winds and drought-parched land, some 370 homes were destroyed in a single subdivision just west of the town of Superior, while another 210 homes may have been lost in Old Town Superior, the Boulder County sheriff said Thursday. No deaths or missing people were reported immediately.

As quickly as the winds began, they were due to subside overnight and the weather to swing quickly to the other extreme: The fire-ravaged area is under a winter weather warning Friday morning, with 5 to 10 inches of snow expected to fall by Saturday, CNN meteorologist Robert Shackelford said.

Downed power lines appear to have caused the Marshall Fire, Sheriff Joe Pelle said. About 15,000 customers had no power early Friday in Colorado, most of them in Boulder County.

Thursday's event was a "truly historic windstorm," with winds gusting over 100 mph in Jefferson and Boulder Counties and fueling the blazes, the National Weather Service said.

Andy Thorn, a resident of Boulder Heights, Colorado, always worried about wildfires whenever the area saw high winds, he said. That's exactly what he witnessed Thursday as he watched from his home in the Boulder foothills as the flames and smoke spread.

"One minute, there was nothing. Then, plumes of smoke appeared. Then, flames," he told CNN. "Then, the flames jumped around and multiplied. Now, we're just thinking about everyone who lost their home and all the firefighters and first responders who do so much for all of us in times like this."

Chris Smith and his wife, of downtown Superior, got a notification Thursday morning from their daughters' day care in nearby Louisville to "come pick up the girls," he told CNN affiliate KCNC. "Please act quickly," city officials there had urged in their evacuation order.

"I called my wife, and she started collecting valuables and clothes to evacuate," Smith said. He drove through smoke on his way there and on his way back.

Across the fire zone, roads were blocked by smoke and traffic gridlock as people tried to make their way out.

At a Chuck E. Cheese restaurant in Superior, families with young children could see smoke out wide windows and made their way toward an exit, video taken by Jason Fletcher shows.

"I'm scared," said a child as another woman leaned hard into the front door to pry it open against blowing wind.

At a Costco store in Superior, shoppers were told to calmly leave their carts and go, said Hunt Frye, who took video from the hazy parking lot. A shopping center and a hotel in Superior also burned Thursday, Pelle said.

From an ICU room at Avista Adventist Hospital in Louisville, white smoke clouded a charcoal sky just across the parking lot and a street, video from Kara Plese shows. The hospital was fully evacuated and patients transferred or discharged, officials there said. Good Samaritan Medical Center in nearby Lafayette also began transferring some of its most critical and fragile patients, according to a news release.

Flames burned right next to roads in Superior and Louisville, and thick smoke made visibility next to impossible, video posted by Broomfield Police shows. Another clip shows homes engulfed in flames.

Downed power lines may be the cause

Deputies confirmed downed power lines in the fire zone, said Pelle, who cited preliminary reports in pointing to those line as the fire's cause, with a final determination expected in the coming days. Also sparked was the Middle Fork Fire, which was quickly "laid down," the sheriff said in a news conference.

Winds had dropped by early Friday to below 20 mph, and the area is under a winter weather warning, with heavy snowfall expected by sunrise in the drought-stricken state, CNN meteorologist Shackelford said.

Wind gusts Thursday pushed the blaze "down a football field in a matter of seconds," Colorado Gov. Jared Polis said.

"There's no way," he said, "to quantify in any financial way, the price of a loss -- of losing the chair that was handed down to you from your grandmother, of losing your childhood yearbooks, of losing your photos, of losing your computer files -- which hundreds of Colorado families have experienced today with no warning."

Friday's anticipated snowfall "comes at a good time," Schakelford said, "since 100% of the state is under some sort of drought, and this snowfall will also help to contain the Marshall Fire."

Much of the western US has been mired in serious drought, with the warmer temperatures and drier conditions consequences of climate change. Denver has seen just over 1 inch of precipitation in last six months -- a record low for the second half of the year. Boulder and its surrounding counties are classified as under a "extreme drought," per the US Drought Monitor.

Though evacuees were not yet allowed to return Thursday night, some already were working to begin the recovery. A search party was scheduled on Facebook for the weekend. On another Facebook page, dozens posted about animals they're looking for or found in and around the burned areas.

One insurance agent in Superior had heard from a client who believed they had lost their home, she told CNN affiliate KMGH.

"It's just something you don't plan on. It's just devastating," she said.

The sheriff would not be surprised if the numbers of casualties or missing people soon change, given the fire's size and intensity, he said Thursday. Already, at least six people were treated for injuries related to one of the fires, a UCHealth spokesperson told CNN Thursday. A law enforcement officer suffered a minor eye injury from blowing debris.

Polis on Thursday declared a state of emergency.

Evacuation centers were open, including one for evacuees who have Covid-19, Polis said. The Federal Emergency Management Agency also announced late Thursday it had authorized the use of federal funds to help fight the fire.

"We are devastated by the destruction and losses we are experiencing," the town of Superior wrote on Twitter Thursday evening, just hours after announcing its evacuation order.