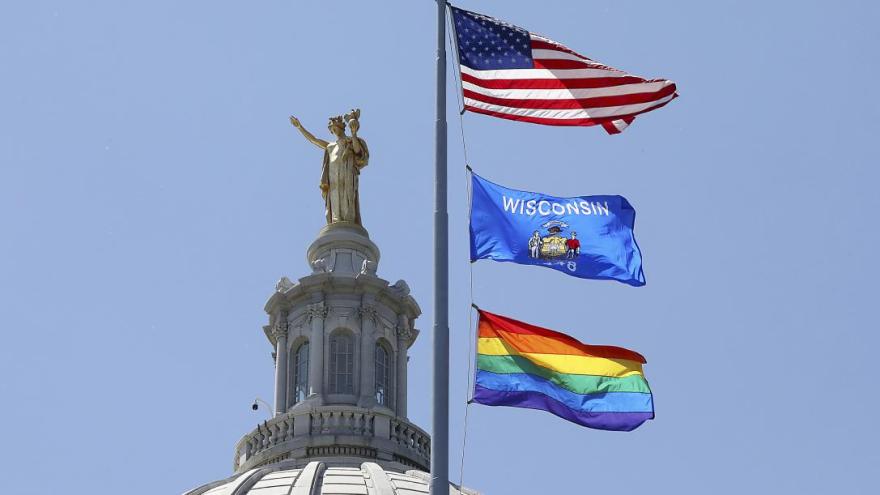 A rainbow flag observing Pride Month is displayed over the east wing of the Wisconsin State Capitol in Madison, Wisconsin, on June 7, 2019.

(CNN) -- A ban on teachers displaying Pride materials in classrooms or writing their pronouns in email signatures will remain in place in a Wisconsin public school district following a contentious board meeting during which parents and students criticized the policy.

The prohibition is based on Kettle Moraine School District's decade-old policy that bans "partisan politics, sectarian religious views, or selfish propaganda." The new interpretation also bans teachers from putting their preferred pronouns in their email signatures.

"We're in a world where politics are highlighted, and it puts people in uncomfortable positions," superintendent Stephen Plum said in a July board meeting where the guidelines were first announced.

A cross necklace would be permissible, he added. "Discrete jewelry, I think, is acceptable."

The ban on items considered political applies only to teachers and staff, not to students and board members.

The policy was revisited Tuesday in response to passionate community debate, with an hour of public comment on the issue at the board meeting.

Most of the people who spoke -- including several students -- opposed the policy.

"I know people who cannot come out to their parents," said Abigail O'Connor, who identified herself as a queer student in the district. "They aren't accepted at home, so they look for acceptance at school. But now that acceptance is slowly fading away."

Two other students -- Bethany Provan and Brit Farrar -- said they initiated a petition calling for a policy change.

"When (LGBTQ students) walk into school and see that simple rainbow flag hanging on the wall, they finally feel safe and supported," Provan said.

Farrar added that the policy is "setting students up for academic and society-based failure and affecting the community."

Farrar noted that not knowing what pronouns teachers preferred was discriminatory.

"Instead of banning teachers from putting their pronouns in their email, we should teach kids what pronouns are, why they are important and why people should actually respect them," Farrar said.

The pair's petition, which started July 29, had garnered more than 13,000 signatures by early Friday.

One of the seven board members spoke against the policy Tuesday. Jim Romanowski he said felt the interpretation went too far after hearing from community members.

"Our district says we support all students," Romanowski said. "Now is the time to prove it."

Another board member, Kelly Brown, said that of the emails and phone calls she has received from people both outside and within the district, 80% of comments from locals were in favor of the policy. "I'm good with the decision" to keep the policy in place, she added.

The school district, which operates 10 schools in Waukesha County, serves more than 3,500 students, according to its website.