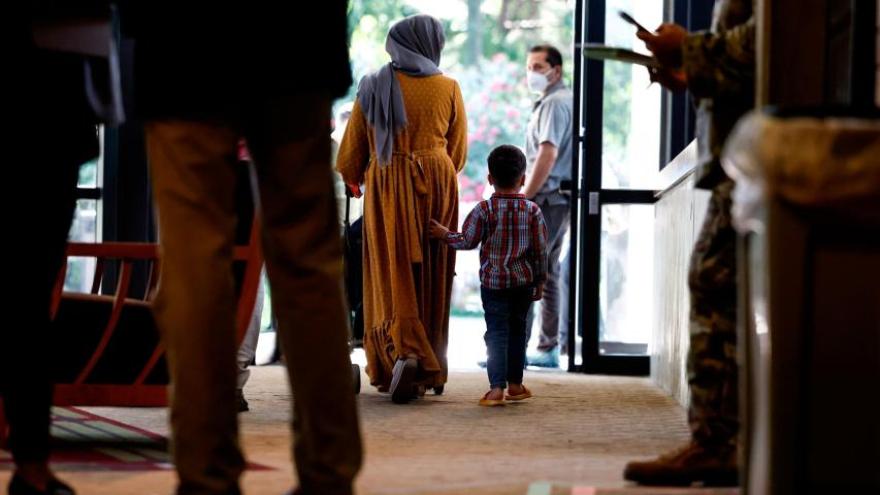 An Afghan national and her son walk through the National Conference Center (NCC), which in recent months has been redesigned to temporarily house Afghan nationals on August 11 in Leesburg, Virginia.

(CNN) -- The Biden administration plans to allow up to 125,000 refugees into the United States for the 2023 fiscal year, the same lofty ceiling as last year, according to a source familiar with the plan.

The refugee ceiling dictates how many refugees can be admitted to the United States, but the administration doesn't have to hit that number and didn't in the last fiscal year. Last year, President Joe Biden raised the ceiling to 125,000 for fiscal year 2022 but conceded that his goal within the first fiscal year of his presidency "will still be hard to hit."

CNN has reached out to the State Department for comment.

The US had for years outpaced other countries in refugee admissions, allowing millions into the country since the Refugee Act of 1980. But the program took a hit under former President Donald Trump, who slashed the number of refugees allowed to come to the US and put a series of limits in place curtailing who was eligible.

The refugee admissions process is arduous and can take years to complete. The challenges, refugee advocates say, have been exacerbated by the coronavirus pandemic.

The United States has admitted only 19,919 refugees into the country as of August 31, falling far short of the Biden administration's goal of 125,000 refugees with a month left in the fiscal year, according to federal data.

While admissions remain low and will not reach the cap of 125,000, the administration has admitted thousands of Afghans and Ukrainians through other legal avenues, outside of the refugee admissions process. Their admission doesn't count toward the final refugee count.