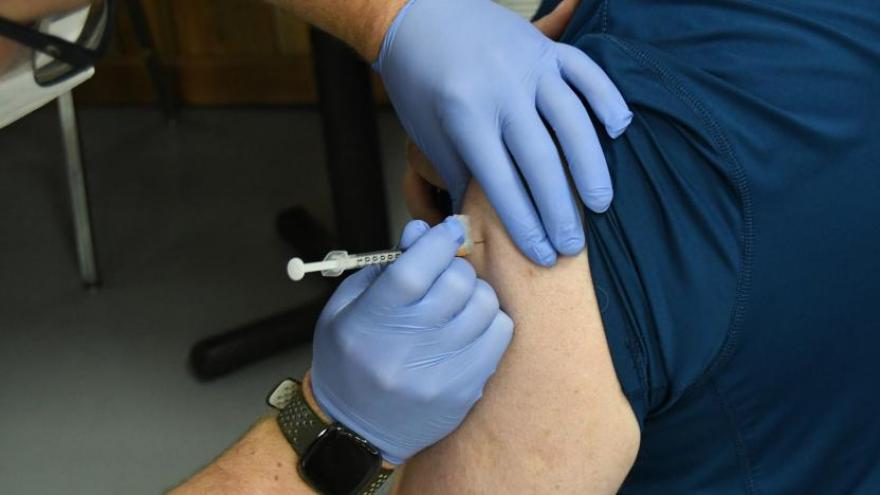 White House health officials are set to announce on Monday that 95% of the federal workforce is in compliance with the Biden administration's vaccine mandate, a senior administration official said.

(CNN) -- The White House on Monday announced that 95% of the federal workforce is in compliance with the Biden administration's vaccine mandate.

"Ahead of tonight's deadline, the federal government has achieved 95% compliance, and 90% of the 3.5 million federal workers are already vaccinated," White House Coronavirus Response Coordinator Jeff Zients said during a press briefing, confirming previous CNN reporting. "We are successfully implementing vaccination requirements for the largest work force in the United States with federal employees in every part of the nation and around the world."

CNN reported earlier Monday that over 90% of workers have received at least one shot and the other 5% have submitted exemption applications that were already approved or are pending, according to a senior administration official. More than 90% of those employees have received at least one dose of a Covid-19 vaccine, with the "vast majority" of that figure having received two shots, the official said.

The announcement comes as the vaccine mandate for federal workers is set to go into effect by the end of Monday. Reuters was first to report on the vaccination rate.

"The goal of vaccination requirements is to protect workers, not to punish them, so tonight's deadline is not an end point or a cliff," Zients said on Monday. "We continue to see more and more federal employees getting their shot. And for the small percentage of employees who have not yet complied, agencies are beginning the education and counseling process."

One source familiar with the data told CNN earlier Monday that the compliance figures have exceeded the administration's expectations.

With more compliance submissions expected to come on Monday, federal departments and agencies will further process and review information and documentation regarding vaccinations in the coming days, the official said, and agencies will provide an "education and counseling process" for those who have not complied or those who do not have a "pending or approved exception or (extension request)." Additional enforcement steps could be taken over time if needed.

The Office of Management and Budget will release a summary chart of agency data regarding compliance on Wednesday morning, the official said.

Earlier this year, Biden imposed stringent new vaccine rules on federal workers, large employers and health care staff in an attempt to contain the latest surge of Covid-19, particularly after the emergency of the highly transmissible Delta variant.

Biden directed the Labor Department to require all businesses with 100 or more employees ensure their workers are either vaccinated or tested once a week. Eighty-four million workers would be covered by the rules, which are scheduled to fully take effect on January 4.

Immediately after being announced, the mandate came under challenge from Republican-led states and some private employers, who say the administration overstepped its authority in issuing such a rule.

A federal appeals court put the mandate on hold. It is now before the conservative-leaning Ohio-based 6th US Circuit Court of Appeals, which could soon decide its fate.

But many employers continue to implement vaccine mandates, regardless of whether the courts uphold or strike down Biden's requirements. Court decisions against mandates apply only to the government's rules, not to individual companies that have instituted their own vaccine requirements.

Biden has also signed an executive order requiring all government employees be vaccinated against Covid-19, with no option of being regularly tested to opt out. The President signed an accompanying order directing the same standard be applied to employees of contractors who do business with the federal government.