When a Florida woman misdialed her sister's number, it sparked a 20-year friendship with a stranger in Rhode Island 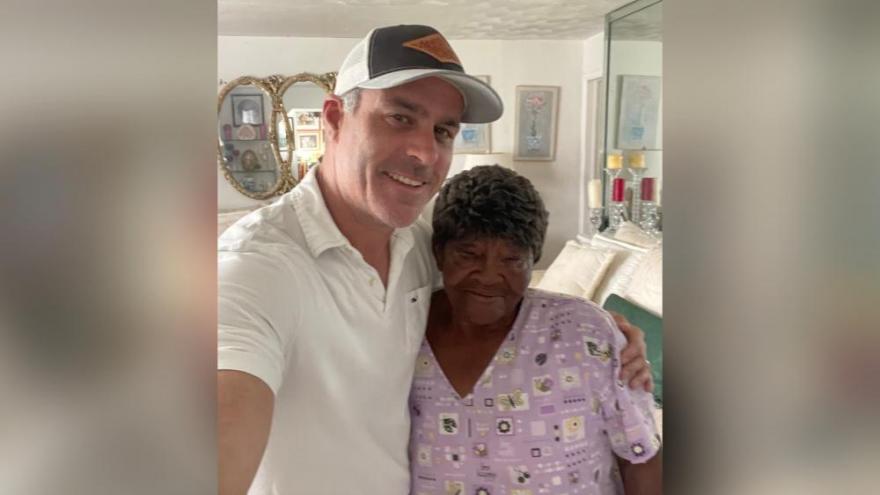 Mike Moffitt and Gladys Hankerson met for the first time over Thanksgiving week.

(CNN) -- What started out with an incorrect phone number is now a friendship that has lasted 20 years.

One day in the early 2000s, Gladys Hankerson of Delray Beach, Florida, was trying to call her sister in Maryland, according to CNN affiliate WPBF.

Her sister's area code was 410, but Hankerson kept dialing 401 instead. Mike Moffitt in Rhode Island picked up.

Hankerson apologized for mistakenly dialing his number and hung up immediately, but she continued to call multiple times. "It continually happened where she accidentally dialed the wrong number, but it eventually switched to just calling to say hi." Moffitt told CNN.

One day, Moffitt decided to stop her from hanging up the phone so quickly and talk with her. "I was like, 'Hey, if you're going to keep calling, let's chat,'" Moffitt said.

Moffitt worked in a call center at the time and said being on the phone didn't bother him. He explained to CNN that talking to Hankerson was like a breath of fresh air compared to his usual calls.

It just so happened that that period in Hankerson's life was a difficult one -- she was divorced and had just lost her son. "During that time, I was downhearted, and he (Mike) felt my sympathy and everything -- lifted me up," Hankerson told WPBF.

Around the same time, Moffitt had lost his grandparents, and Hankerson filled that void for him just like he filled the void for her.

Fast forward 20 years and their friendship is thriving. Moffitt said the two have stayed in contact, talking every few months or so, but they had never met in person.

That was until last week's Thanksgiving holiday, when Moffitt and his family were visiting Florida and decided to surprise Hankerson at her home in Delray Beach.

"The reason we ended up meeting was because a drawbridge was up," Moffitt said. "We waited 10-15 minutes at a drawbridge, and eventually decided to keep going. That's when I realized we were 2 miles away from Gladys' house."

After grabbing some flowers, Moffitt knocked on Hankerson's door and was welcomed with open arms.

"I walked in and said, 'Gladys, it's Mike from Rhode Island!' and she said, 'Oh, my friend Mike! I'm blessed,' and threw her arms up," Moffitt said.

Hankerson gave Moffitt a tour of her house, introduced him to her family and the two caught up like they would on the phone.

After all this time, Hankerson told WPBF, Moffitt seems like a family member. "I wish more people could be like that, you know," she said. "That would be so nice. The world would be better, too -- people would be better."